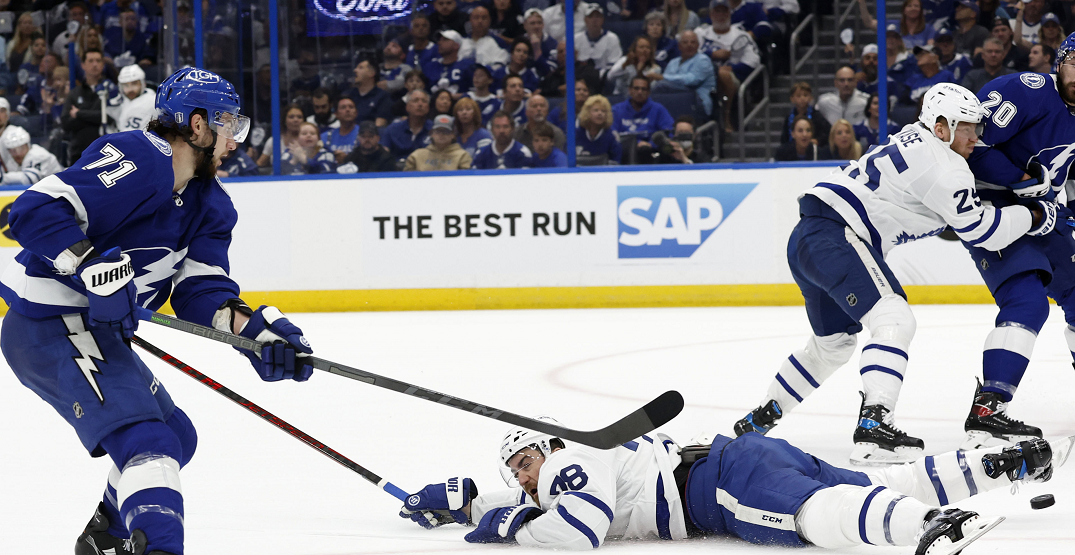 At least fans of the Toronto Maple Leafs won’t have to hear “it was 3-1” jokes this year if they fail to win this series against the Tampa Bay Lightning.

With an opportunity to take a commanding series lead on Sunday, the Maple Leafs instead suffered an ugly 7-3 loss to the Lightning in Game 4 at Amalie Arena.

The game started poorly for Toronto and never got any better. Steven Stamkos opened the scoring just a minute into the first period.

That was the first tally of the series for the Tampa Bay captain.

Goals from Pierre-Edouard Bellemare and Pat Maroon extended the Lightning lead to 3-0 before the game was even eight minutes old.

Tampa makes it 2-0 with this one from Bellemare pic.twitter.com/FLb9FIn9ba

The Bolts took a 3-0 lead into the first intermission despite the shots being tied 10-10.

Ross Colton made it a 4-0 game just over three minutes into the second period on a shot off of Jack Campbell’s glove that the Toronto netminder failed to snag.

Just over two minutes later, Corey Perry continued the rout with his second goal of the series in the midst of an extended 5-on-3 power play.

The Leafs were at least able to break Andrei Vasilevskiy’s shutout in the third period. More specifically, William Nylander was able to, scoring his first two goals of the series.

Willy gets us on the board pic.twitter.com/hzN7fpe1wc

An empty-netter from Ondrej Palat made it 6-2, but Jake Muzzin later got the Leafs back within three.

Jake Muzzin gets a shot through traffic 🚨 pic.twitter.com/7JSFcMf5hZ

Colton then added another empty-netter to close the game at 7-3.

The best-of-seven series is now tied at 2-2.

The series will now shift back to Toronto for Game 5, which will go from Scotiabank Arena at 7:30 pm ET/4:30 pm PT on Tuesday.