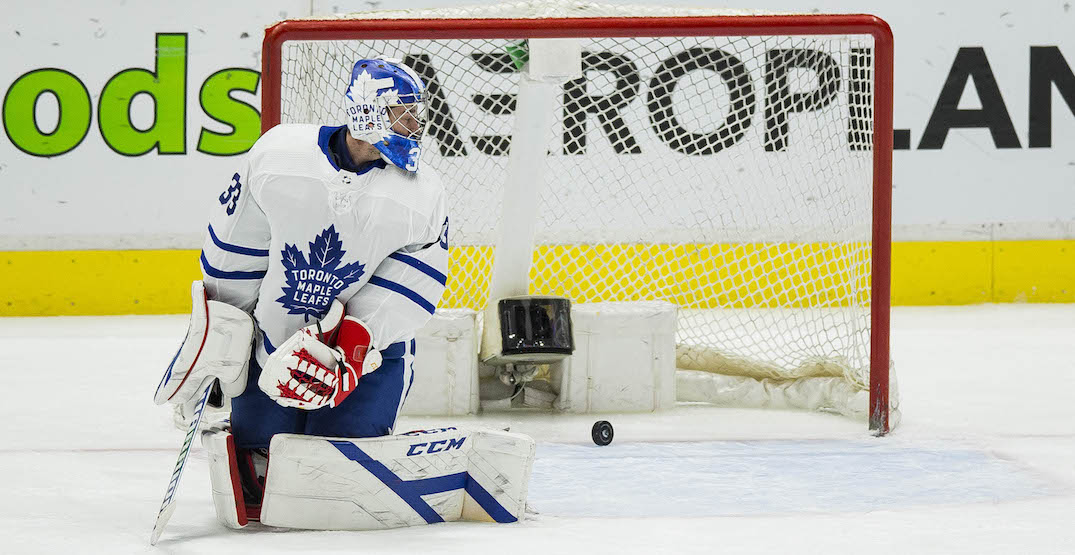 Don’t look now, but the Toronto Maple Leafs are on a five-game losing streak.

It’s far from the end of the world. There’s more than enough time to figure it out before the playoffs start.

While they haven’t officially clinched yet, it’s just a matter of time before they get an x- next to their name in the standings. All things considered, it’s been a fairly remarkable season for the Leafs as they possess a 28-13-5 record at the moment.

But biggest issue: we’ve heard this song and dance before, and their main problem isn’t that it’s a line that’s not scoring or that there’s a defensive pair that isn’t meshing.

Ten games out from the playoffs, their goaltending situation is really no clearer than it was just over a month ago on March 19, the last time Frederik Andersen played in the lineup with an undisclosed lower body injury.

Jack Campbell and David Rittich both look a little shaky right now, and the coaching staff is still publicly hopeful for an Andersen return.

There’s also the very unlikely possibility any of Michael Hutchinson, Veini Vehvilainen, or Joseph Woll get added into the mix. It’s kind of incredible there’s seven different goalies who have suited up for the Leafs this year (Aaron Dell is the seventh, but he was claimed on waivers by New Jersey back in January.)

Do the Leafs ride the hot hand? Do they stick with one guy? Do they flip flop starts in the playoffs? And… which two guys do the Leafs dress?

The Leafs don’t need otherworldly goaltending to find playoff success, but they do need a baseline of competency and hopefully some form of consistency. They might find it before mid-May, but at this current point in time, it’s missing.

Let’s go through each realistic option the Leafs have to run out once the postseason gets going.

Two things can be true about Jack Campbell: he was on a historic pace and he has since come back down to Earth.

Regression to the mean is inevitable, and after Campbell had a 11-0 record with a .934 save percentage, he has returned to 11-2-1 with a .919 mark just three starts later.

That’s still all you can ask for out of a backup goaltender, which is what he has been throughout his entire career.

If healthy, he’s likely got somewhere between four to six starts left this season and is the consensus candidate to play in net Game 1.

As well as he’s played on most nights, maintenance days and games off have been a regular part of Campbell’s schedule this year.

He has earned the chance to be the Leafs’ ‘guy’ come playoff time. But his leash probably won’t be very long, and he’ll have to keep proving himself over and over again, with little room for error.

New acquisition David Rittich has yet to really impress as a Leaf.

It’s an unfair bar, but he has played in three games (two starts) and the Leafs have lost all three. It’s a small sample size and he has the resume of a decent NHL goalie in the past, but hard to be inspired on a contending team by that.

Rittich has 16 minutes of NHL playoff experience: he let in three goals on nine shots in relief during last year’s Western Conference bubble while with Calgary.

It means next to nothing, but it’s not exactly a confidence boost either.

The Leafs could be fine trotting out Rittich in the playoffs. But he hasn’t shown his teammates that he can perform to expectations yet, and only has a couple of auditions left.

There is a non-zero chance Andersen never plays for the Leafs again, as he’s currently injured and his contract expires this offseason.

Andersen is 31 with 392 NHL games so far: already quite the strain on one’s body.

There’s also a chance he recovers completely and plays 10 more seasons. There’s really no way to know what his status is for this year or any year after that.

He’s been on long-term injury reserve since mid-March and has looked past his prime and worn out in much of the past two seasons. If he’s going to be back like Sheldon Keefe was predicting two weeks ago, the clock is definitely ticking to prove that.

Sheldon Keefe says he has "no concern" that Frederik Andersen is done for the season. The goaltender recently had another follow-up appointment with doctors. We haven't seen him on the ice since playing March 19.

It’s likely Andersen would need a start or two to get back into the groove of things, and there’s no guarantees he’d even be in playing shape if so.

There’s 23 days and 10 games left to figure it out, and many more questions than answers right now for the Leafs when it comes to their netminders.