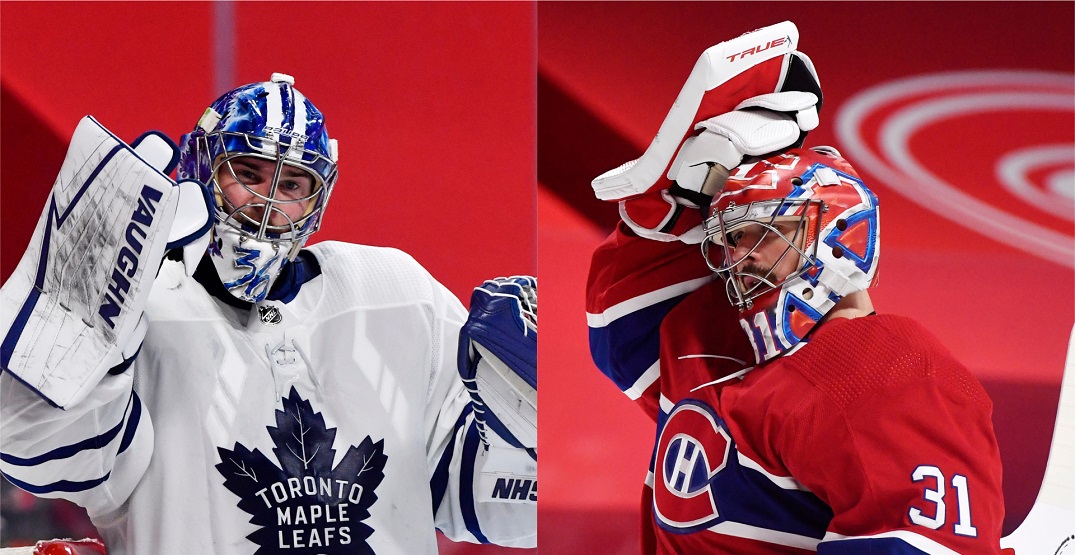 Any way you dissect the goaltending battle in the Toronto Maple Leafs’ 3-1 series lead over the Montreal Canadiens, you’ll inevitably come to the same conclusion at some point.

“Man, Carey Price is making a lot of money,” you say to yourself. “And Jack Campbell really isn’t.”

With a cap hit of $10.5 million through 2026 via a contract extension signed in the summer of 2017, Price is the highest paid goaltender in the league. He’s performed pretty well through four games, with a .920 save percentage that is above his career playoff mark of .917.

But a quick look to Price’s opponent — and their salary cap sheet — show that you can’t always predict someone’s success solely due to how much money they’re making.

The Leafs’ Jack Campbell has allowed four goals in four games, with a .965 save percentage along the way. He makes $1.65 million this season and next, or about 6.5 times less than Carey Price.

“It’s just been an honour to battle him,” Campbell said Tuesday night about playing Price these playoffs.”

In reality, it hasn’t been a close series at all, which really shouldn’t come as much of a surprise based on how the season series played out.

Campbell has given up three goals at 5v5. Price has given up seven. Even if the Leafs hadn’t taken a single power play to date in this series, they’d likely still be up 3-1.

Both goalies have played pretty well in this four-game sample, to be honest. But the fact that the one who’s played better is a career backup and not a former MVP shows the volatility of the position, and about as clear an answer as any that poor asset management will almost always come back to bite you.

When the Leafs initially acquired Campbell in February of 2020, few really knew what his future in Toronto would look like. Frederik Andersen was clearly overworked during his time as a Leafs’ starter, but still usually came around to play when he was fully healthy.

Like Price, Andersen was a star goalie in a big market. But he was making only about half of Price’s money, collecting a paycheque of $5 million per season on a five-year deal.

Campbell, a former first-round pick like Price, had never really figured it out at the NHL level for any consistent stretch. Being picked by Dallas 11th overall in 2010, the hype wore out eventually.

World Junior and OHL success didn’t translate at the pro level, really, as he bounced between the AHL and ECHL for many seasons. After playing just one NHL game in Dallas over six years, he was shipped out to LA for defenceman Nick Ebert, who never made the NHL.

At age 28 after four seasons in LA as a backup/third-stringer, it was a bit of a gamble to see if a guy with under 60 career NHL games played  could stabilize the Leafs’ net.

He was likely going to slide into the secondary role for the remainder of his contract ending in 2022, but the split of games was unclear.

One pandemic and a series of mysterious Andersen injuries later, Campbell has shown this year, and these playoffs that the Leafs’ net is now most definitely his.

Jack Campbell is the fourth different @MapleLeafs goaltender with a playoff shutout against the Canadiens and first since Johnny Bower in Game 2 of the 1967 #StanleyCup Final.#NHLStats: https://t.co/KqkyxmhMlQ pic.twitter.com/HpNUlUxgiK

Toronto has found a legitimate No. 1 option that is shining in a playoff series against a divisional opponent. You really do love to see it.

Price deal just one of Bergevin’s many failures

In the four years since Price’s mega-deal has been signed, the Habs have not finished any higher than fourth in their division.

Price has received zero first-place Vezina votes in the last six years, with a save percentage of .909 in that timeframe. So much for a guarantee that he’ll be the best goalie in the league.

The Habs are on the brink of yet another playoff elimination in yet another series where they’re the underdog.  Sure, the supporting cast around Campbell is much better than Price’s, there’s no use debating that. And sure, they might ‘always have a chance to win with Price in net.’  But they usually don’t. He has won just 90 of his 195 starts since 2017-18.

It’s hard to blame Price himself for signing the deal. But it’s easy to blame a management group that has set the team up to fail once again.

When your team is supposedly built around your goaltender and he’s being outplayed by a guy your biggest rival acquired for a tweener forward in Trevor Moore and a pair of third round picks, it is about as big a gut punch as you can get.

For as much talk as there always is about the Leafs’ contract situations putting their team in a fictional cap hell, the Habs are actually very deep in there, with Price’s anchor of a deal very much killing their ability to build around him.