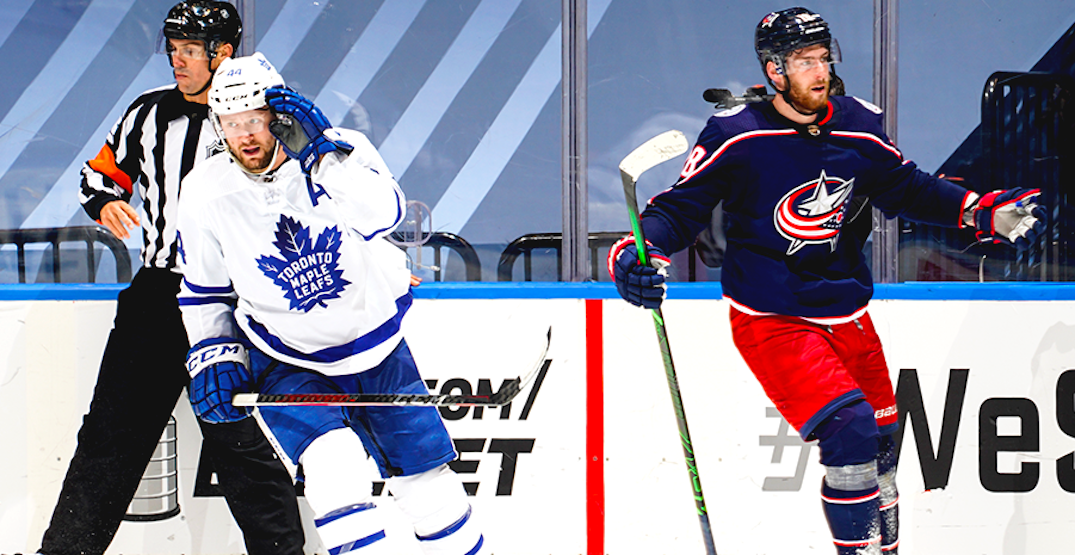 The Toronto Maple Leafs are one game away from being knocked out of Stanley Cup contention in their best-of-five series against the Columbus Blue Jackets.

On Thursday night, a game that seemed sealed for the Leafs turned into anything but, with a 4-3 overtime loss at the hands of a hat trick by Blue Jackets winger Pierre-Luc Dubois to cap things off the latest postseason adventure in Toronto hockey lore.

Dubois found the net for the third time 18:24 into the first overtime frame to complete what one side would view as an impressive comeback, but the Leafs could only view as a heartbreaking blown chance.

With little time to rest, it’s same time, same place on Friday night as the teams meet in a potentially decisive Game 4 at 8 pm ET.

In just his third NHL game, Nick Robertson made his case to stick in the Leafs’ lineup moving forward with his first career goal that put Toronto up 3-0 and chased Joonas Korpisaalo out of the Columbus crease midway through the second period.

What a way to score your first career @NHL goal 🔥#LeafsForever pic.twitter.com/MAIyTzajog

After a dominant 3-0 performance by the Leafs in Game 2 to even the series, there was reason enough to believe that Toronto would be able to ride out the second half of regulation to a similar outcome, if not the exact same score.

But a pair of goals from Dubois and one from Seth Jones evened up the score within the next 20 minutes. Game on.

Individually, each regulation goal was preventable, but not atrocious. Jones found the back of the net via a missile, while Dubois scored off of a well-placed one-timer for his first and off an odd-man rush for his second to tie it at three.

In relief for Columbus, Elvis Merzlikins stopped the next 12 he faced in regulation and nine in overtime to play hero for the Blue Jackets.

While signs were pointing towards a third straight game with no goals being scored in the first period, the hockey gods had other plans.

Though it bounced in off Columbus defender Seth Jones’ foot, defenceman Cody Ceci was credited with his first goal since October 4, 2019 with a shorthanded effort to put the Leafs up 1-0 with 1:08 left in the opening frame.

Coincidentally, that last Ceci goal also came against the Blue Jackets, in just Toronto’s second game of the season.

Leafs forward William Nylander came through with his fourth career playoff goal to double the lead to 2-0, with Robertson’s marker coming just 1:40 later.

Wearing their road whites, the Leafs didn’t enjoy the familiar comforts of their usual locker room, bench, or ability to make the last line change that they had in the first two games of the series. But none of those changes allow any real explanation for Toronto’s inability to close out what looked like a rather winnable game.

Sheldon Keefe says "we got what we deserved today." Adds that the #leafs didn't play with "any purpose or plan."

Leafs fans didn’t take the loss too well either:

“Dubois is gonna pay for what he did to Muzzin”

Meanwhile, Jackets head coach John Tortorella had a quote for the ages:

Following defenceman Jake Muzzin’s injury in the final moments of Game 2, Martin Marincin slotted in for his first action of the series, being favoured over rookie Rasmus Sandin. Columbus made its own minor tweaks, putting in d-man Markus Nuutivaara in for Dean Kukan, who was shaken up in the first period on Tuesday but did return.

It’s now-or-never time for the Leafs, with two straight victories being needed to advance in the series. If they don’t come through, it could be a long offseason in Toronto with this Game 3 loss being seen as the one that got away.