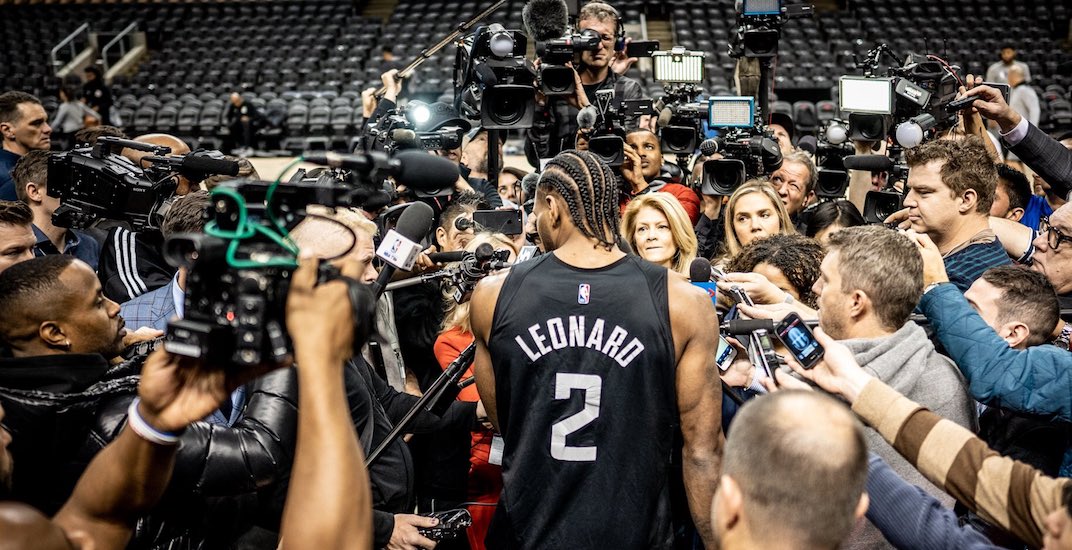 The red carpet will be rolled out for Kawhi Leonard tonight, as he finally receives his NBA championship ring from the Toronto Raptors.

Kawhi and the LA Clippers are in town for their only game in Toronto this season (7 pm ET on TSN). It’s an important night for Raptors fans, as they get to celebrate with the Fun Guy one more time.

But then it’s game time.

1. Kawhi will receive a hero’s welcome

If there’s one guarantee for the pre-game festivities it’s that Leonard will receive a thunderous ovation from Raptors fans.

Defeating the Golden State Warriors to win the championship while captivating the entire country will earn you that.

The Raptors have even teased what fans can expect with a short tribute video.

2. Kawhi will receive some boos once the game starts

Once the game starts however, expect the pleasantries to stop, from Leonard and the Raptors fans.

I mean, he is on the opposing team after all.

It’s not unheard of for Toronto sports fans to boo a beloved former player. When Maple Leafs legend Mats Sundin returned to Toronto as a member of the Vancouver Canucks he first received a standing ovation from fans, but once the game began there were plenty of boos.

Kawhi is expecting something similar:

#Raptors fans- are you cheering or booing #Kawhi tonight? 🤔👇

3. There will be a new Kawhi meme

Whenever Kawhi is put in a situation outside of a basketball game, he tends to cause a meme to go viral.

Over the past year and a half, Leonard has produced such classics as “the laugh,” “what it do baby” and “hey, hey, hey.”

Hey hey hey, what it do babyyyyy! Kawhi the King!

When he receives his ring before the game, expect to see a new meme be born across NBA Twitter, especially if he’s handed a microphone.

4. Siakam and Anunoby will make life difficult for Leonard

Throughout the game it’s likely that Pascal Siakam and/or OG Anunoby will be responsible for guarding Leonard, and they’ll show the Clippers star what he missed out on by going to Los Angeles.

The Raptors managed to contain Kawhi in their first meeting of the season in Los Angeles, limiting him to just 12 points — though the Clippers were without Paul George that night.

It’s going to be a classic teacher vs students showdown, as Siakam and Anunoby have both talked about how much they learned from him last season.

If you enjoy watching rewatching videos of the Raptors winning the championship (and who doesn’t?) then tonight’s game will have you feeling all warm and fuzzy inside.

Throughout the game expect to see constant clips and references of the Raptors winning the Larry O’Brien Trophy.

6. The game will come down to the wire

Nestled somewhere among all the festivities a basketball game between the Raptors and Clippers will take place, and it’s going to be a good one.

After losing the first game in Los Angeles, the Raptors will look to get revenge and even the season series at home.

Statistically, both teams are very similar. Defensively the Raptors have the fifth-highest defensive rating in the league (103.2) while Clippers are seventh (103.9). In net rating (point differential per 100 possessions) the Clippers are fifth overall (6.6), while the Raptors are sixth (6.2).