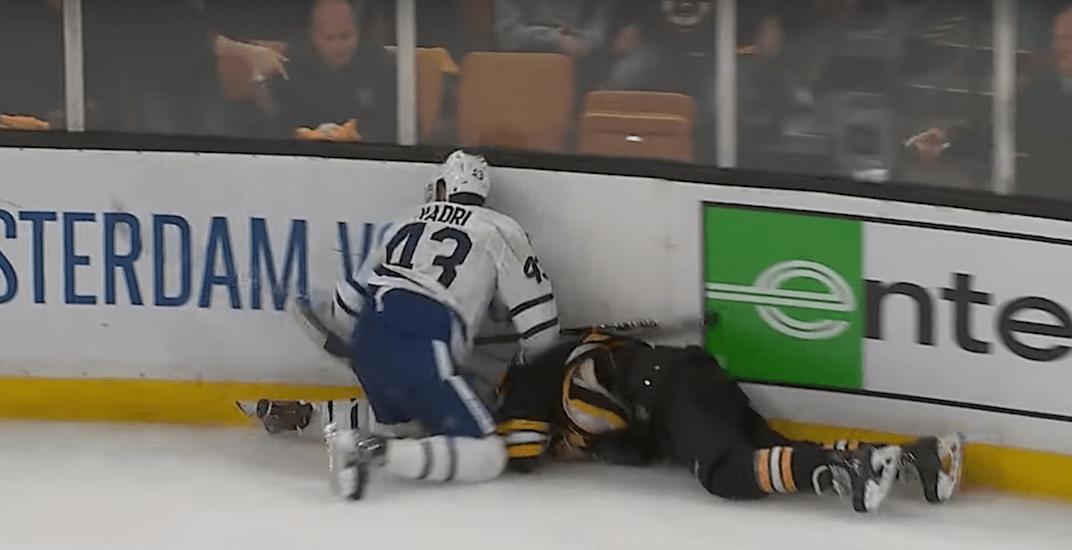 Things got heated in Game 2 between the Toronto Maple Leafs and Boston Bruins on Saturday.

The Bruins won 4-1 to even the series 1-1, in a game that was physical from the get-go and only got nastier as time wore on.

As is often the case when these two teams face each other, Nazem Kadri was in the middle of things all night long.

His eventful night ended with 5:58 remaining in the third period after this cross-check to the face of Bruins forward Jake DeBrusk.

It was a moment of frustration from Kadri – who may face further supplemental discipline from the league after receiving a five-minute major and game misconduct on the play.

Kadri’s frustrations likely not only came as a reaction to a hit moments earlier on Patrick Marleau, but also from a missed call earlier in the game, when he was the target of a knee-on-knee hit from DeBrusk that went unpenalized.

Kadri leaves the ice after this knee-on-knee collision with DeBrusk. #HockeyNight | #StanleyCup pic.twitter.com/Y9zjFqdexU

Kadri and DeBrusk had also gotten into it earlier in the game, with both players getting offsetting roughing penalties back in the first period.

Kadri got a penalty for this?! pic.twitter.com/d7xxLhuA7U

It wasn’t just Kadri getting into it for the Leafs. Jake Muzzin was on both the giving and receiving end of some big hits, including this one that forced Torey Krug to leave the game.

The Bruins scored two goals in the first period and were able to dictate the pace of play for much of the game, outshooting Toronto 41-31.

Kadri scored the lone Leafs goal halfway through the third period to cut the Bruins’ lead to 3-1, but his major penalty with under six minutes to go ended any realistic chance at a comeback. Patrice Bergeron scored on the ensuing power play to put the game away.

Despite allowing four goals, Frederik Andersen was stellar again for the Leafs, making several highlight-reel saves to keep his team in the game.

The Leafs now return home for Game 3 in better shape than a year ago, sitting in a 1-1 series tie rather than a 2-0 deficit.