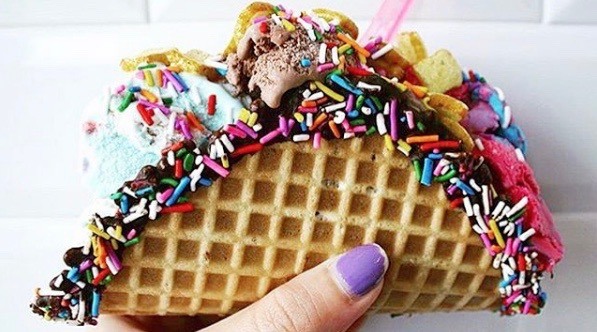 Gone are the days of boring ice cream scoops in Toronto.

This city is pushing the flavour envelope on frozen dessert so far that some of the newest bizarre creations are almost unrecognizable. Though they’re definitely still edible.

If you haven’t noticed the newest ice cream trends you’ve either never been outside or never logged into Instagram. Either way, here are some of the best (read: craziest) new cones and cups you have to try in Toronto.

Bringing back all the Sesame Street induced cookie cravings from childhood, Cookie Monster is the perfect way to get your daily quota of blue food colouring.

You know when the Globe and Mail‘s food critic Chris Nuttall-Smith scathingly describes Sweet Jesus like “a medical exhibit from the lost causes cabinet of a journeyman Victorian-era surgeon” — you’re going.

Taro with a Twist – Arctic Bites

Toronto is welcoming Thai ice cream with just as much vigour as it welcomes Thai everything else. Except this isn’t just taro-flavoured ice cream, it’s also rolled into little scrolls first. Adorable.

No better way to beat the heat wave ☀️😅

Let’s face it, cones are sooo 2014. Ice cream tacos, that’s where it’s at. It’s like a way sexier version of an ice cream sandwich: easy to hold, but you don’t look like you’re 4. Or maybe you do. Whatever.

#AppleRumble (apple pie filling, #vanilla butter cream, housemade #butterscotch, #CinnamonToastCrunch all sandwiched in a glazed #doughnut) tasted good too imo but way too small for the price I think #freelancefoodie

The only possible rival to an ice cream taco? An ice cream donut, of course. Whatever way we can invent to pack more sugar into less space, bring it on. In fact, just fill that bowl with sugar and give me a spoon.

Horchata con Tuna. Cactus pear sorbet in horchata. All made in house! This is a classic oaxacan treat that is now available at our Paleteria at 72 kensington avenue

Before you run off in horror (sorry if you have already), this one doesn’t actually have tuna in it. Phew. It’s tequila-infused prickly pear sorbet in horchata, topped with walnuts. A perfect ending scoop for your 7-scoop ice cream hop. We’re kidding, please don’t do that.