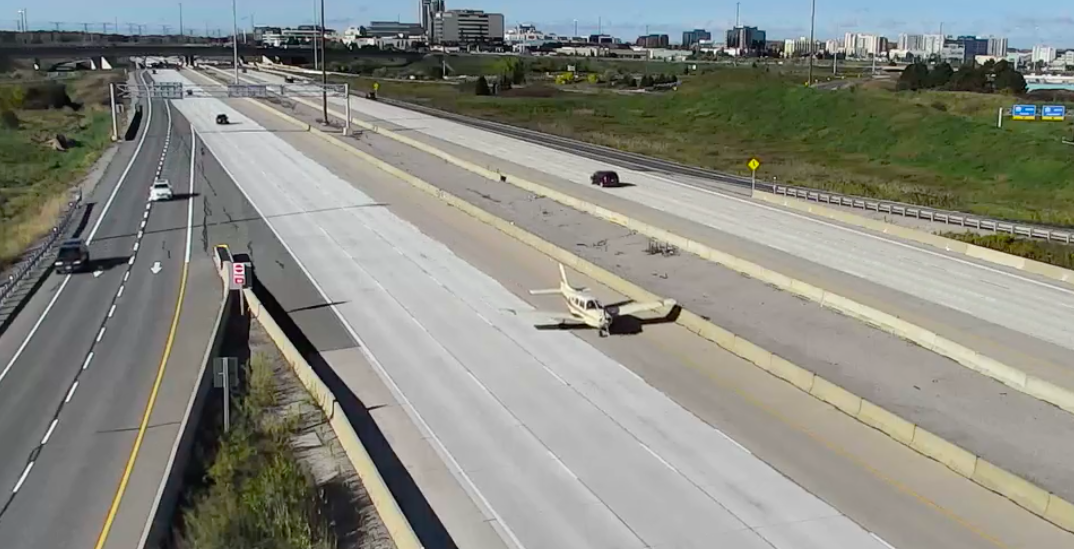 The Highway 407 has released CCTV footage of a dramatic emergency landing that took place in the eastbound lanes on Wednesday.

The plane suffered from mechanical issues shortly after taking off from Buttonville Airport. The pilot landed the plane in the eastbound lanes of the 407 near Woodbine Avenue.

The video released by Highway 407 shows the small plane coming in from the top left-hand corner near the date stamp. There was very little traffic on the highway, so it made for a clear landing.

🎥 New footage from our CCTV cameras of the plane that made an emergency landing eastbound on 407 ETR just west of Woodbine this morning! The plane has been removed from the scene and our team is in the process of reopening all lanes. pic.twitter.com/DlSDZBTEoz

“Something you don’t see very often[…]We got an airplane on the ground here,” an OPP officer said in a video posted to their Twitter.

The officer said that the plane suffered from engine failure shortly after takeoff. The pilot was able to complete the emergency landing without causing any damage. It had recently undergone routine maintenance.

Airplane landed on #Hwy407 at Woodbine Ave. No injuries, no damage https://t.co/bwHU2DoDuh

“No damage to the airplane, no injuries to anybody in the airplane, or on the ground, nor other vehicles involved,” said the OPP officer.

The officer added that the plane would have to be floated back to Buttonville Airport.