Solidarity sign at one of the construction sites. (Michael Garron Hospital)

The Hate Crimes Unit is investigating the hanging of nooses found at various Toronto construction sites, over the past few weeks.

On June 26, a noose was found at one of Daniels Corporation’s construction sites in Toronto’s Regent Park neighbourhood.

The company said it took “immediate action” and filed a report with Toronto police.

“We are disgusted and horrified at this heinous act, which we are treating as a hate crime,” the corporation said in a statement on Friday. “This deplorable act against the Black community is unacceptable and we reaffirm that there is zero tolerance for racism, prejudice and hate on our construction sites and within our organization.”

“Unfortunately, this is not an isolated incident within the construction industry and reinforces that more action is required.”

Police say they responded to a radio call on Saturday, June 27, at 11 p.m. in the Dundas Street East and Sumach Street area.

It is reported that employees were assigned to a closed construction site that is not accessible to the public and arrived to work, when they found a noose tied to the ceiling on the 29th floor.

And, the construction firm EllisDon said that a nose was also found at one of their construction sites on June 25. They also reported finding a noose at their worksite on June 10.

Police said they responded to a call in the Coxwell Avenue and Sammon Avenue area at 12:31 pm that day.

It is reported that workers assigned to a closed construction site, which is not accessible to the general public, arrived at work to find nooses attached to their construction equipment.

Toronto Police have been “actively investigating” both incidents and have engaged the Hate Crime Unit.

Additionally, both the construction company and owners of the site have been assisting with the investigations.

“We are giving our full support to the police investigation to ensure we can hold the perpetrators accountable. We are committing every resource we can muster to identify the guilty individual, or individuals, and ensure they are prosecuted to the fullest extent of the law,” EllisDon said in a statement.

In the aftermath of these incidents, the Toronto community has responded with solidarity for the Black community.

After June 10, one local family took action and made a homemade sign and posted it to the plywood construction fencing on Sammon Avenue. 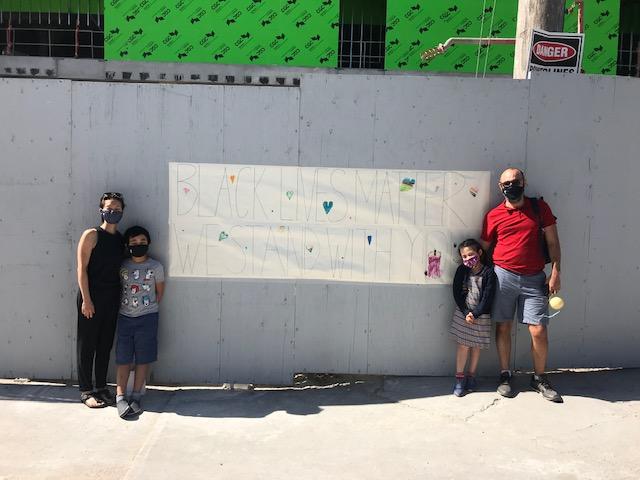 And, on July 1 a solidarity stand-in was held in Regent’s Park to denounce anti-Black racism.

Regent Park today. Gathering at the site where the noose was placed. Neighbourhood is so strong. pic.twitter.com/DA55eVOrgF

Councillor Kristyn Wong-Tam was also in attendance, calling it an “energetic anti-racist rally” in Regent Park.

It’s been a full July 1st, from a lovely family brunch to an energetic anti-racist rally in Regent Park to an evening stroll in Queen’s Park. Wishing you and yours a safe #CanadaDay2020. pic.twitter.com/NmgBeZbiAO

Investigators are appealing to anyone with information to contact 55 Division at 416-808-5500 or Crime Stoppers to remain anonymous.