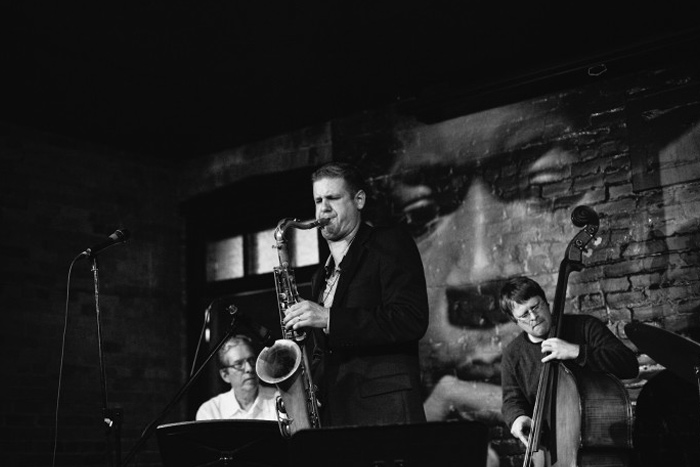 Jazz and summer time go hand in hand. Long warm days, leading to sweet summer nights, and the added bonus of free live jazz. With over 32,000 free public events to date, this year is no exception for the TD Toronto Jazz Festival.

The annual Festival is just around the corner, and we’ve rounded up 5 free shows for you to check out.

Toronto-based saxophonist Ryan Oliver is one busy musician. Touring with his legendary jazz group, The Shuffle Demons, Oliver has taken his talent to India, Australia, New Zealand and the United States. The Juno-nominated artist, who is also a member of Derek Miller’s group, will be saxing out some hard bop, blues and funk at no cost – well, besides those couple of drinks you’ll have at 3030 Dundas West that Friday night.

Another free Friday night show is taking place at the Shangri-La Hotel, where Duane Forrest and his acoustics will take the stage. The multi-lingual jazz musician learned to play different instruments while living in Mexico and Puerto Rico, and he brings the world out in his performance. When offstage, Forrest is a dedicated humanitarian who uses proceeds from his albums and tours to benefit non-profit organizations in Latin America.

Jarrod Lawson
When: Friday, June 24 at 9 p.m.
Where: Shangri-La Hotel Toronto
Jarrod Lawson’s love for music began very early, at the tender age of two to be exact. Growing up in a musical home, where his father had a recording studio. Years later, Lawson’s love for music began to translate into his own music and live performances that have awed crowds. It’s not everyday an artist can claim he performed at Stevie Wonder’s birthday party, but Lawson can. Mixing funk, folk, R&B and jazz, Lawson is a treat at this year’s festival.

Ryan Oliver’s band The Crookers Quintet are a Toronto-based jazz combo that deliver a 50’s era hard bob sound. Between Oliver’s saxophone tones and band member Tim Hamel’s uptempo trumpet, the bass lines of Alex Coleman, Joel Haynes’ drum beats, and smooth piano by Richard Whiteman, The Crookers are on point during live performances. This is an all-star local cast of musicians in one Quintet.

Toronto’s very own Shahi Teruko has made a name for herself locally and internationally. One of the fastest rising names in our soul and R&B scene, Teruko’s sound is funky, warm, and will keep you dancing.