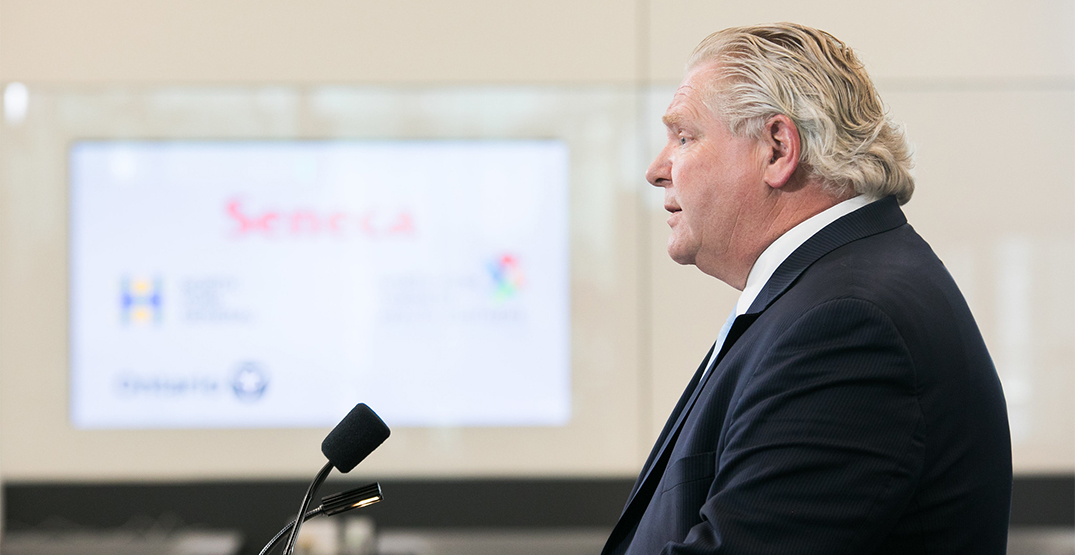 Ford called on the federal government to tighten international travel restrictions, saying he doesn’t want to face a fourth wave fuelled by a variant brought in from abroad.

He asked Ottawa to implement mandatory hotel quarantine at the land border. Right now, it’s only mandatory for international arrivals who arrive by plane.

“Too many people are exploiting the weak measures at our land border to get around the hotel quarantine,” he said.

He criticized the two sets of rules currently in place for arrivals by air and arrivals by land, and said a taxi company he spoke with recently said they had 400 cars near the border to pick people up.

“Anyone can see it’s not working,” he said. “The borders are broken. We need to fix it. And stop the variants from coming into our province.”

Colin Furness, an infection control epidemiologist and professor at the University of Toronto, spoke to Daily Hive last week about how Canada’s border controls are too weak to meaningfully limit COVID-19 introduction.

He called for a mandatory 14-day supervised hotel quarantine instead of the current three-day hotel stay for only air passengers.

“Quarantine is really flimsy. It’s not adequate,” he said.

He’d also like to see flight crew stay somewhere where they’re monitored on layovers. Currently, they can move about the country freely after they land.

COVID-19 modelling released by the Ontario COVID-19 Science Advisory Table Thursday indicated as many as 90% of recent cases in the province are variants of concern. Canada’s Chief Public Health Officer Theresa Tam also said Friday that most COVID-19 cases across the country are now a variant of concern.

“The new deadly Indian variant was found here in Canada,” Ford said. “And it didn’t swim here, I can tell you that.”

Health Canada currently classifies the B.1.617 first identified in India as a variant of interest rather than a variant of concern, because the public health agency doesn’t have enough data to definitively say this strain is more transmissible or more dangerous.

When asked about strengthening border controls Friday, Prime Minister Justin Trudeau pointed to the current pre-arrival testing requirements where travellers need to procure a negative test before crossing the border, a second upon arrival, and a third on the 10th day of their quarantine.