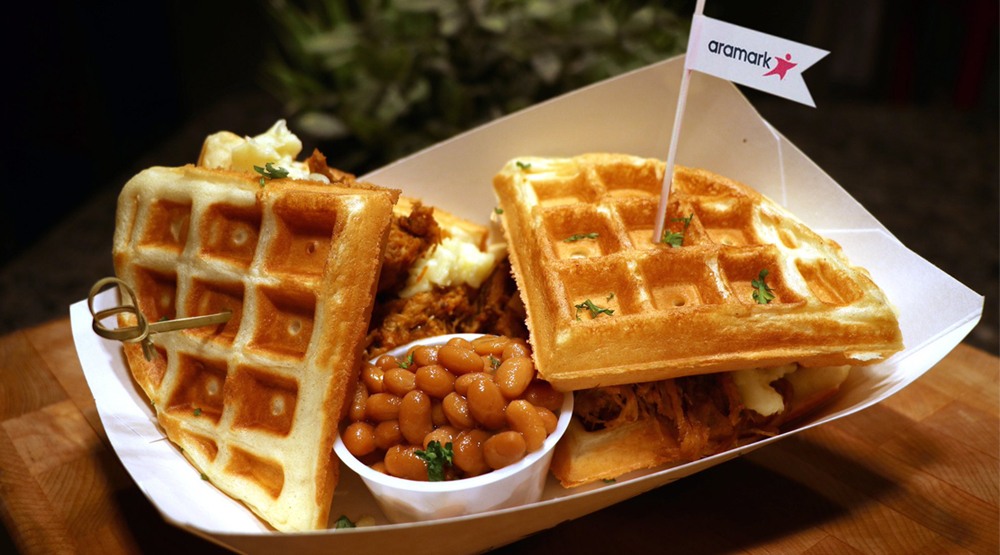 Make no qualms about it, the food at Toronto Blue Jays games is anything short of a home run. It’s one of the main reasons why people often bring their own food to the Rogers Centre (which you’re allowed to do, by the way).

The fare at the Rogers Centre has improved over the last few years, but it has a long way to go in order to become some of the best stadium food in Major League Baseball.

When baseball-goers spend their hard-earned money on a meal at a Blue Jays game, not only do they want value, but they want something they can’t get anywhere else. The run-of-the-mill stadium hotdog, nachos or popcorn are fine, but fans often want to treat themselves to something out of the ordinary at a ball game.

This year, the Rogers Centre features some all-new offerings for hungry followers of the Blue Jays. In addition to the typical ballpark food you’ll find at the dome, here are a few of the brand new menu items for 2018.

First off, it’s the Log Cabin Waffle Sandwich with maple beans. It’s no chicken and waffles, but pulled pork and cheese curds take the place of the typical fried chicken to complete this quintessential Canadian ensemble. It’s also topped with mole sauce.

Good news, hungry people: We've got new MLB food items to share with you. We apologize if it's not even close to lunch time where you live.

Watching your favourite team can be nail-biting and stressful. And when people stress out, they often tend to eat their feelings. Now, their weapon of choice may include some good old-fashioned cookie dough.

Whether you’re cushioning the blow of a devastating loss or celebrating a big win, now you can grab some cookie dough in a cup to consume at Blue Jays games. It’s available on its own or à la mode with soft serve and toppings.

Astros, Blue Jays & Phillies fans will be able to buy cookie dough in a cup this season pic.twitter.com/d1QoLaYhDA

And for the vegans out there wondering if you’re covered, fret not. You’re in luck with these new vegan nachos available at Blue Jays games this year. This dish comprises red and white tortilla chips with vegan cheese, black beans, and pico de gallo.

Want some healthier options? There are some of those too. The @Pirates have a green and grains salad and an Un-Tuna Salad sandwich. The @BlueJays added the Vegan’Acho Nachos. pic.twitter.com/6ne94mVLt5

In addition to the offerings mentioned above, a Korean Beef Taco Trio will make its debut on the Rogers Centre menu in 2018. As will a Brisket & BBQ Sandwich with blood orange BBQ sauce.

Fans can sink their teeth into these new ballpark foods when the Blue Jays kick off their 2018 schedule at home against the New York Yankees on Thursday, March 29.