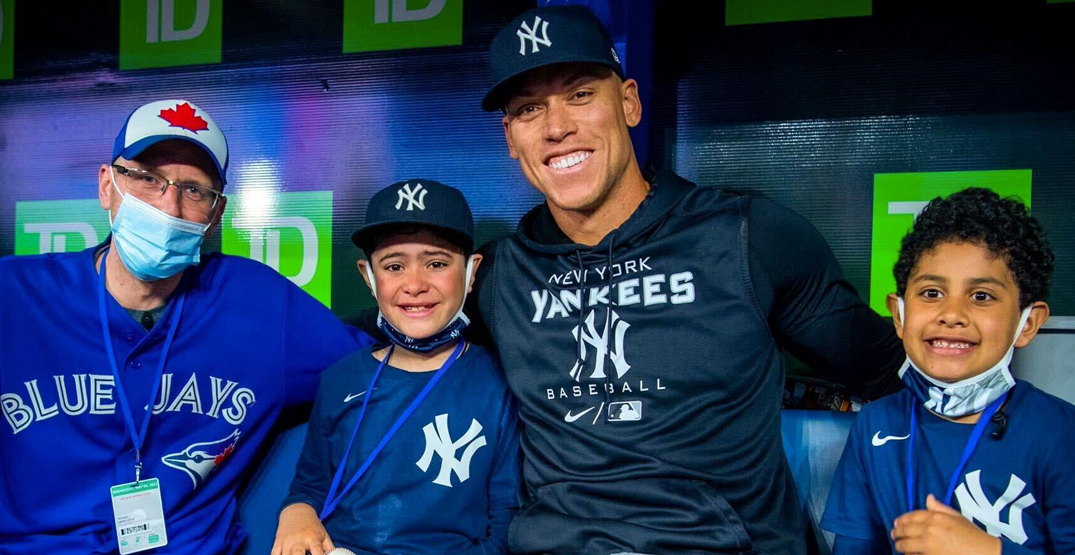 How can you not be romantic about baseball? By now, you’ve probably seen the viral video of the adorable exchange between a Blue Jays fan and a Yankee fan that brought a youngster to tears.

One day later, they met again, and this time, the little one even got to meet his favourite player, Aaron Judge.

Both clubs heard about the generous act by Mike Lanzillotta, as he handed off a home run ball to nine-year-old Derek Rodriguez and gave them the red carpet treatment for the series finale between the Blue Jays and Yankees.

Both Lanzillotta and Rodriguez chatted with the Yankees slugger in the dugout prior to the game.

Tonight, Derek got to meet his favorite player 💙 pic.twitter.com/18b24wKYkv

And the Blue Jays also recognized Lanzillotta’s selfless act by handing over a signed jersey from George Springer.

“That’s one of those moments that warms your heart,” Yankees manager Aaron Boone told reporters pre-game. No matter what side of the line you’re on, most baseball fans would agree it was a very cool moment.

After Judge caught wind of the exchange last night, he said: “That’s what’s special about this game. It doesn’t matter what jersey you wear, everybody’s fans. Everybody appreciates this game.”

Baseball is the best 💙 pic.twitter.com/Qca6U7UD09

Needless to say it’s been a whirlwind 24 hours for both parties, from getting to meet the Yankees right fielder, to holding court with reporters pre-game, to watching another Blue Jays-Yankees game at Rogers Centre.

Despite being division rivals, a simple moment in the stands turned into a viral moment online, something these two families surely won’t forget anytime soon.