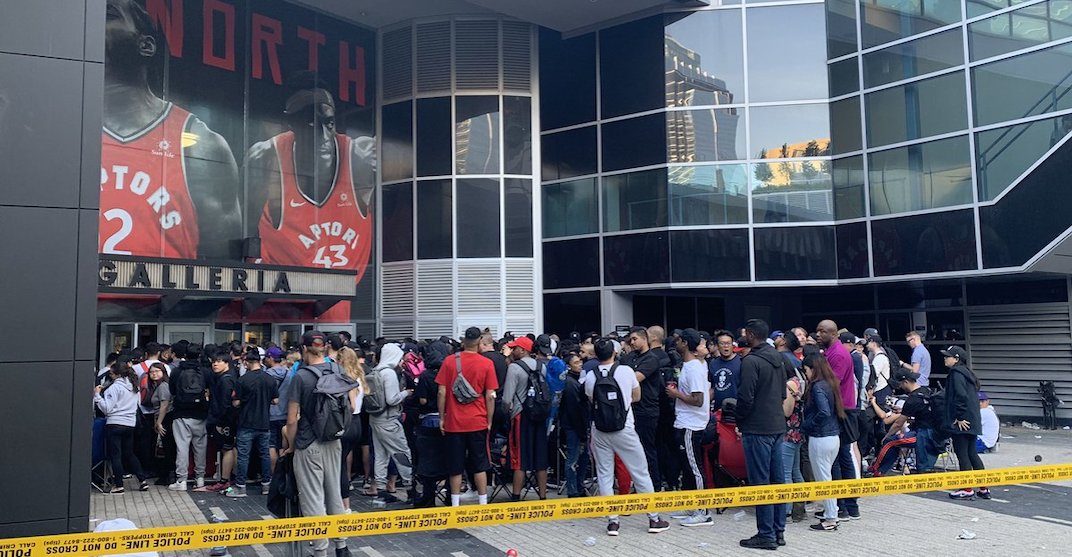 It’s safe to say that the Raptors hype is still going strong in Toronto.

So much so, that fans started lining up on Thursday for Raptors/OVO championship t-shirts and hats, which is being sold at Real Sports Apparel on Friday, from 8 am to 6 pm.

Photos and videos shared on social media show groups of people camped outside of the store, which is located next to the Scotiabank Arena, with some fans tweeting that they had been waiting in line for well over six hours.

At 5:30 am on Friday, a massive line that wrapped around the block had already formed outside of the store and during the morning commute, the line continued all the way up to Front Street and past Union Station.

This is 5:30am it’s around the entire block now pic.twitter.com/u2FEKno2Ja

In case you were planning on heading down to Real Sports today, here’s what the crazy line looks like.

Toronto Raptors fans have been lining up since midnight last night to grab the OVO x Raptors Championship collection 🤯 pic.twitter.com/Ed67DBzXQj

This was at 2am @RealSports for the championship OVO raptors hat and T shirt drop. Now 330am and it’s wrapped around twice. #WeTheNorth #champs #kawhi pic.twitter.com/ZBMNsBiYhP

The love for our @Raptors continues. People started lining up yesterday for Raptors/OVO championship parade t-shirt & hat. Pic taken by a friend who is braving the lineup. Stretches across Front to York to Jurassic Park pic.twitter.com/M0ZZIytBVn

@FAN590 @gregbradyTO On my way to work at 6:45 there is a massive queue for new Raptors OVO Championship clothing being dropped this morning. Beginning to think the Raptors NBA Championship could be a bigger cultural significance than if the Leafs were ever to win Stanley Cup. pic.twitter.com/aRSOEK11SF

The lineup for the #OVO @Raptors hats is insane!!! Up York and around Union. #WeTheNorth pic.twitter.com/CY3ohZoR66