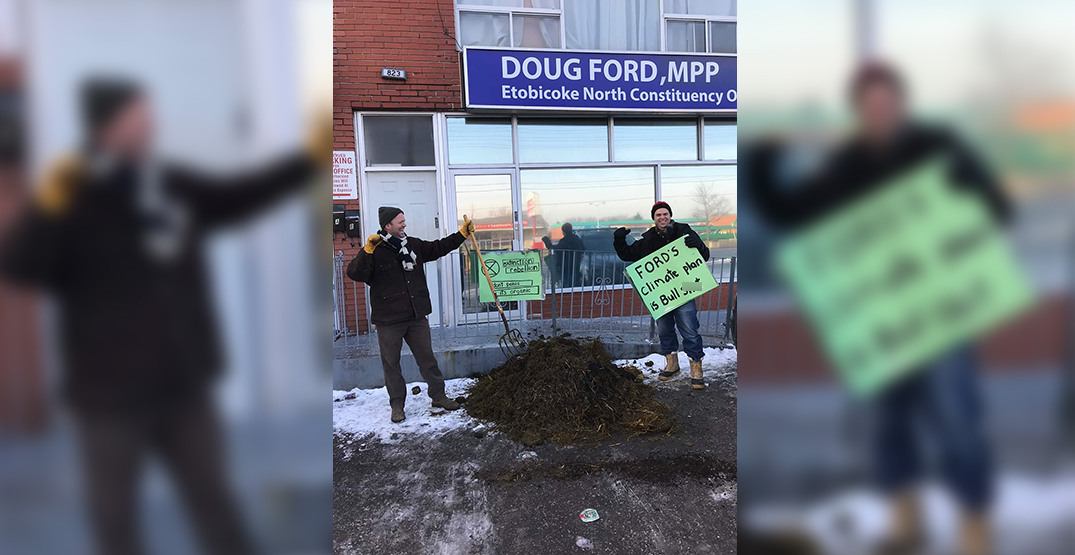 Climate protestors don’t often mince words when it comes to Ontario’s environmental policies, but now one group has decided to drop a serious load of minced something else on the premier’s doorstep.

Extinction Rebellion, a group best known for blocking roadways across Canada as part of a nationwide protest against the government’s inaction on reducing carbon emissions, has left an actual load of crap outside of Premier Doug Ford’s Etobicoke North constituency office.

A picture posted to Extinction Rebellion Hamilton’s Twitter account shows two smiling men standing next to a large pile of what the group says is organic cow manure they shovelled off a truck.

Their grievances with the Ford government, according to the release, include the appointment of Joe Oliver as president of the province’s Independent Electricity System Operator, Energy Minister Doug Rickford’s use of a “climate-science denying website in the Ontario Legislature to support the government’s cancellation of 750 renewable energy projects,” and the recent cancellation of Hamilton’s Light Rapid Transit (LRT) system.

By their own telling, Extinction Rebellion is an international movement that uses non-violent civil disobedience to achieve progress on issues related to the environment.

Daily Hive reached out to Toronto Police Service to determine if it’s against the law to shovel poo onto a storefront. They did not respond by the time of publication.