Environment Canada has issued a Snow Squall Alert for Toronto on Friday afternoon.

According to the alert, “brief, intense snowfall is expected to develop.”

The weather agency says that under the snow squall, visibilities will be significantly reduced due to the heavy snow combined with blowing snow.

The snow squalls are expected late this afternoon into this evening.

“A well organized snow squall originating from Lake Huron will move across the area late this afternoon into this evening. At this point, it seems very likely this band will impact the afternoon and evening commute for areas near the north shore of Lake Ontario,” says the alert. “Areas further east along the St. Lawrence River might also be impacted as well.”

Environment Canada adds that this band will be capable of producing quick accumulations “of 2 to 5 cm in an hour along with sudden reductions to near zero visibility in heavy snow.”

They warn that travel may be hazardous due to sudden changes in the weather.

Environment Canada is forecasting a high of -3ºC during the afternoon, which will feel more like -12ºC with the windchill.

However, more extreme temperatures are forecast for this evening, with a low of -10ºC expected, which will turn into -17ºC overnight.

In addition to that, the weather agency says there’s a 30% chance of flurries in Toronto this evening.

Whatever you get up to today, make sure to stay safe and warm, Toronto. 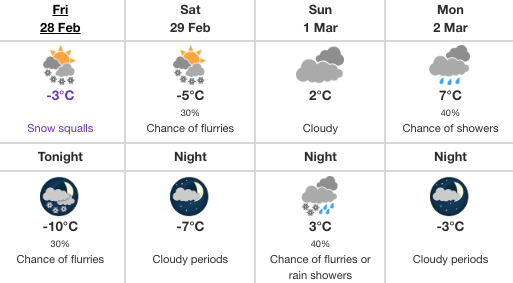