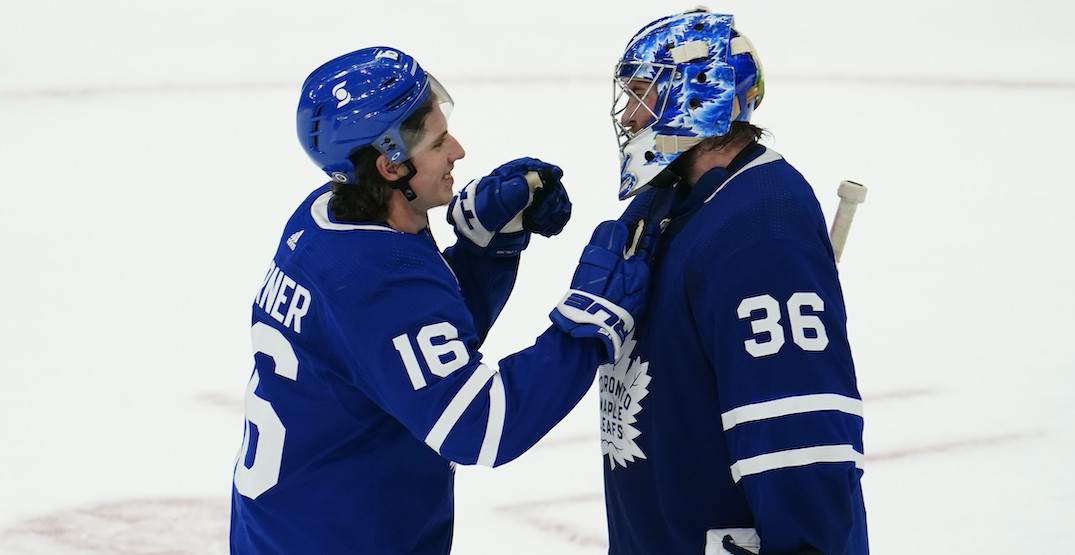 Campbell made 32 saves as Toronto defeated the Montreal Canadiens 3-2. The Maple Leafs have won five straight games and have a seven-point lead on the second-place Edmonton Oilers.

Auston Matthews had a goal that added to his league-leading total, which sits at 28. Zach Hyman had a goal and an assist for Toronto, while T.J. Brodie scored his first goal with the Leafs.

After a good start to the third period, the Leafs had to scratch and claw to survive the final minutes to secure the win. It came down to some critical saves from Campbell and he was, for most of the game, stupendous.

When the final buzzer sounded, his teammates mobbed him in celebration. Campbell and Mitch Marner also shared a special moment when the star winger counted off each win with a big smile.

Jack Campbell was emotional speaking to @ShawnMcKenzieSN about his franchise record 10th straight win to start the season and the bond he has with his @MapleLeafs teammates. pic.twitter.com/NWfrgLJzdi

“There’s not a day I don’t thank the Lord for putting me here in Toronto with these amazing guys. And I don’t want to forget my L.A. teammates and coaches there because they got the ball rolling for me in the NHL and without them I wouldn’t be here.”

“I mean, I’m just so happy for him,” Matthews said. “He’s such an amazing person and he brings a lot of joy into everybody’s lives in the locker room. I just couldn’t be happier for him. He played unbelievable again tonight. He’s been unbelievable all season.”

For the season, Campbell has a stunning 1.57 goals-against average and a .944 save percentage. Both of those numbers are top-three league-wide.

“I think it’s important to give Jack his moment here,” Toronto coach Sheldon Keefe said. “He’s been through a lot and worked extremely hard to put himself in the position to play like this and get these results.”

Campbell currently has the second-longest win streak for a goalie this season, only behind Tampa Bay goalie Andrei Vasilevskiy who had 12 straight. With this win, Campbell also tied Canadiens goalie Carey Price (2016-17) as the only two in NHL history to start a season with a 10-0-0 record.