A mass emergency alert sent out at around 7:25 am on Sunday regarding an “incident” at the Pickering Nuclear Generating Station was in error, according to Ontario Power Generation (OPG).

According to the alert, an incident was reported at the station in Pickering, and the bulletin applied to those who live within 10 km of the Nuclear Station.

“There has been NO abnormal release of radioactivity from the station,” the alert read. “People near the Pickering Nuclear Generating Station DO NOT need to take any protective actions at this time.” 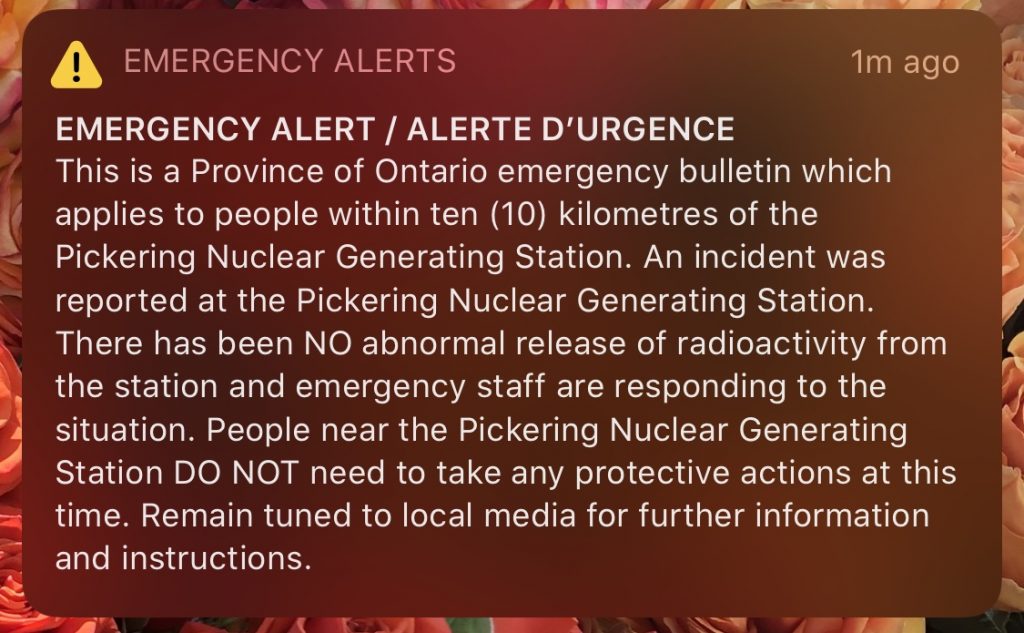 Following the alert, the OPG said that the alert was sent in error.

“There is no danger to the public or the environment,” said the OPG on Twitter.

Important update: the alert regarding #Pickering Nuclear was sent in error. There is no danger to the public or environment.

The City of Pickering also confirmed the error.

“We have confirmed that there is no emergency or incident at the Pickering Nuclear Generating Station, and that there is no danger to the public. The emergency alert issued by the Province earlier this morning was sent out in error,” said the city in a tweet.

Durham Regional Police say they have made contact with Durham Emergency Management to clarify the message.

“We are working with DEMO and OPG to receive further clarification and an update will be coming shortly.”

According to the OPG, the Pickering Nuclear Generating Station is one of the largest nuclear stations in the world and “has been safely and reliably providing Ontario with power for decades.”