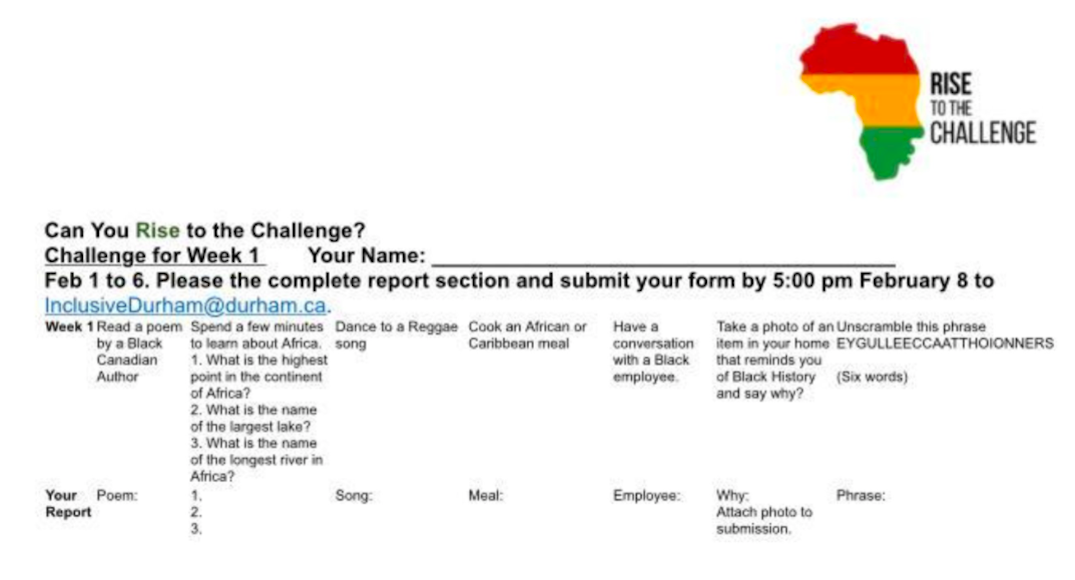 The Region of Durham has received backlash over its Black History “scavenger hunt” with local officials later releasing an apology for the “misstep.”

On Wednesday, Toronto-based writer and activist Desmond Cole released the document called “Rise to the Challenge,” which asked employees to “dance to a Reggae song,” spend a few minutes learning about Africa, or “have a conversation with a Black employee.”

“So Region of Durham created a black history month scavenger hunt activity for employees and I am 🙃🙃🙃. This what we’re doing in 2021?” Cole said.

this what we’re doing in 2021? pic.twitter.com/jwcNrGHoBE

The region responded to Cole’s tweet, saying, “We acknowledge that mistakes will be made when addressing anti-Black racism. This challenge activity is one of them. We continue to learn and strive to do better.” They also called it a “misstep.”

Celina Caesar-Chavannes, former MPP for the riding of Whitby in the House of Commons, responded saying Durham region’s statement was a “sham of a PR message” and the word “sorry” wasn’t mentioned.

“Someone tell John Henry to pack it up, if he doesn’t understand the basics.”

Henry, the Regional Chair and Chief Executive Officer of Durham, released another statement on Thursday morning saying, “We are sorry.”

“As part of Durham Region’s Black History Month initiatives, an internal challenge activity for Durham Region staff was a mistake. It had caused harm to our Black employees and community—damaging the inclusive culture that were are trying to build.”

Henry added that they will continue to learn and engage with the Black community.