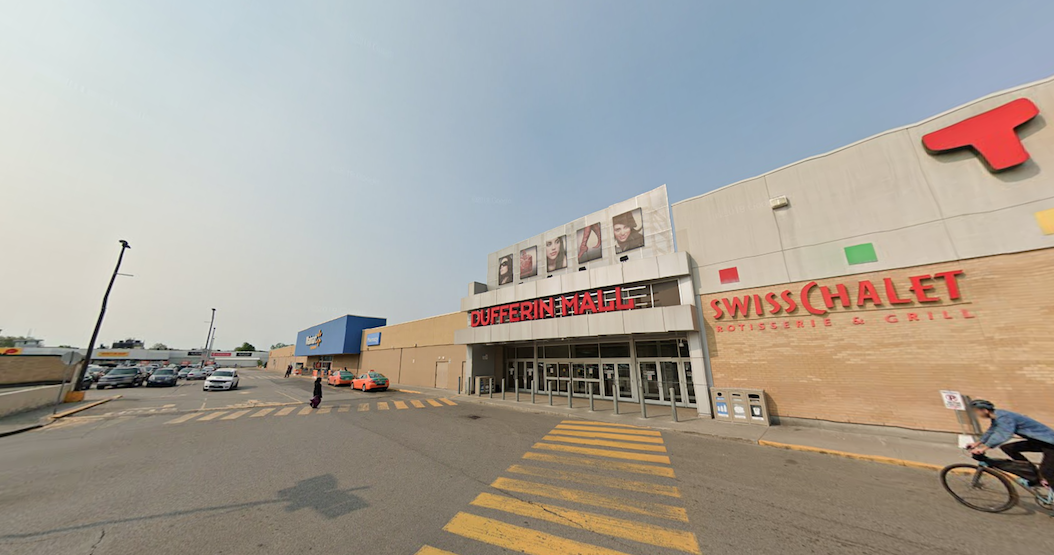 A group of Torontonians are making a hilarious plea to Mayor John Tory to implement a movie theatre at the Dufferin Mall.

In a video posted to Twitter by Toronto comedian Michael Kolberg, he and a few friends make a number of very compelling points for building a new movie theatre at the Dufferin Mall.

Mainly, the argument centres around the convenience of having a nearby movie theatre rather than having to travel all the way downtown to see a movie, or drive out to the Cineplex on the highway.

“They should build a movie theatre at Dufferin Mall so that I don’t have to go down to Queen Street to a movie theatre named after a bank,” musician Steve Sladkowski says in the video.

Although the video may seem like an out-of-the-blue request, the owners of the Dufferin Mall are, in fact, already exploring new development opportunities for the site, including rental housing, park space, and extending the existing mall.

“Why not use that piece of mall to build a movie theatre? I think that’s a great idea,” Kolberg says in the video.

The video then ends with a directive for Mayor Tory to use his emergency powers that have been granted to him because of COVID-19 to force the mall to build a movie theatre. It also includes light threats directed to Tory, saying “we demand a movie theatre at Dufferin Mall immediately or there will be consequences.”

They Should Build A Movie Theatre At Dufferin Mall pic.twitter.com/wCRktC6JkI

As it turns out, Mayor Tory saw the video and decided to make a video response, saying he will keep their ideas in mind as the Dufferin Mall’s redevelopment plans come through City Council.

“That was a very clever video and it caught my attention, and it wasn’t because you threatened consequences,” Tory said in his video. “I get the message that you think a movie theatre would be a better use than the planned development on the site, a mall expansion that is, and I will keep that in mind, I promise you, as the approval process goes through here at City Hall, and I hope that you and your friends will continue to be active in that approval process because that’s what it’s all about — to make sure we take into account the views of different people.”

Tory wasn’t the only local politician to respond to the video. City Councillor Joe Cressy retweeted it and tagged Deputy Mayor and Davenport City Councillor Ana Bailão, saying “the ball is in your court,” to which Bailão responded saying “I’m on it!”

Hey @anabailaoTO, ball is in your court. They Should Build A Movie Theatre At Dufferin Mall. https://t.co/EErkFrZdOx

Bailão told Daily Hive that the idea for a movie theatre had not been previously raised for the Dufferin Mall development.

“I appreciate the creativity of Davenport residents in creating this video drawing attention to the Dufferin Mall redevelopment,” Bailão said. “We are working closely with community members to secure many benefits, including providing new park space, affordable housing, public realm, among many others. These conversations are community-led, and the proposal for a movie theatre has not been raised. While I cannot influence which businesses are selected for the mall or the newly developed area, I encourage all residents to share their support for what they feel are local priorities.”

Even Cineplex got in on the action, responding to Kolberg’s video with a Wayne’s World GIF.

Matthew Kingston, the VP of Development and Construction for Primaris Management Inc., the owner and operator of Dufferin Mall, says that it’s too early to say what exactly will be included in the expanded mall, but that the suggestion has been noted.

“We are impressed with Mr. Kolberg’s market research, detailing the other downtown and west-end movie theatre options as well as his synopsis of people’s desires to see a new theatre at Dufferin Mall,” Kingston told Daily Hive.

“At this time, we are still working with the Councillor, City Staff and neighbourhood residents on the approval of our re-zoning application, so it is a little premature for us to be able to say with certainty what any new retail and mall areas will look like.  Having said that, we will definitely keep his suggestion in mind as we progress with our project and look forward to safely welcoming him and everyone else back into Dufferin Mall as our Provincial restrictions ease.”

So whether these passionate Torontonians’ plea for a movie theatre will come to fruition remains to be seen.