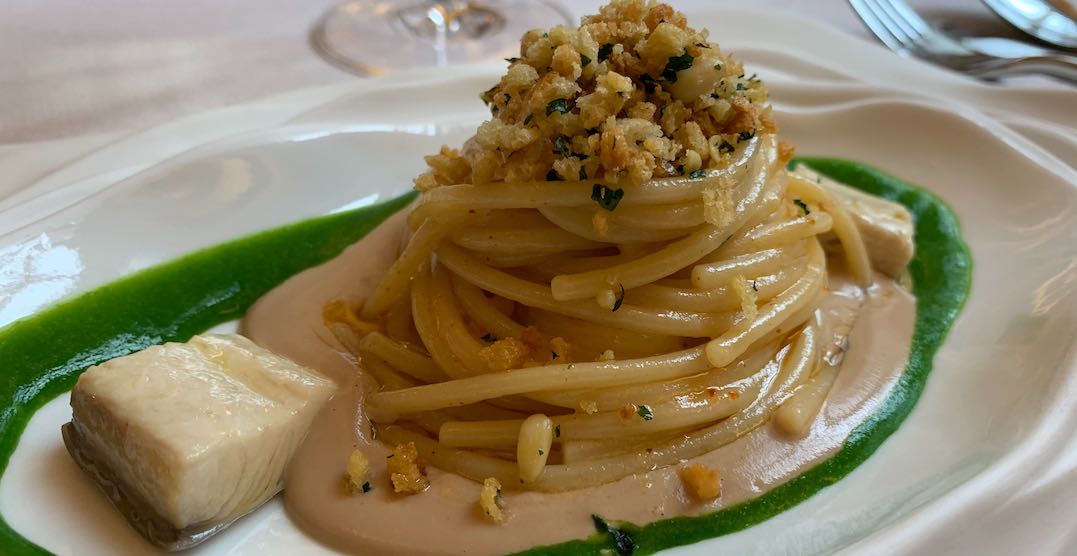 Considering it only opened in summer of 2018, Don Alfonso has already made quite an impression on Toronto’s — and Canada’s — food scene.

Alongside participating in gourmet-food focused charity event Foodball, and being listed on Canada’s 100 Best Restaurants of 2019, the restaurant has been named second-best Italian restaurant in the world by 50 Top Italy. 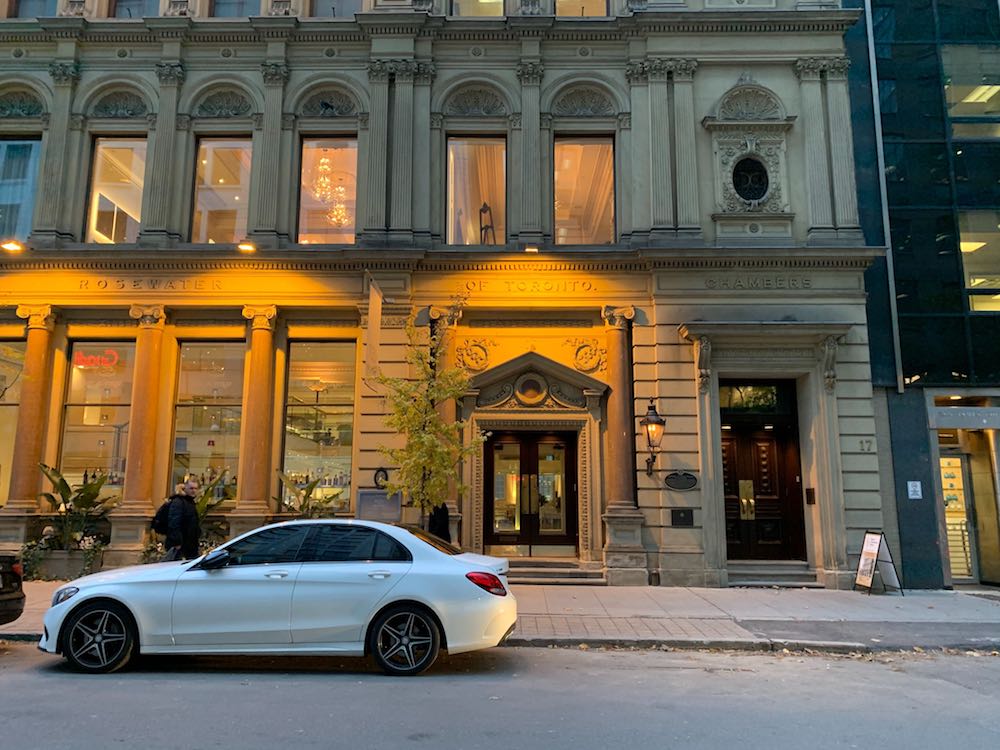 The global ranking of fine Italian dining dropped its list this autumn, and the Canadian eatery nabbed the second place position.

The spot, located at 19 Toronto Street in the city’s Financial District, is behind only Passerini in Paris, France, and ahead of Tokyo, Japan’s Heinz Beck, which landed third place. 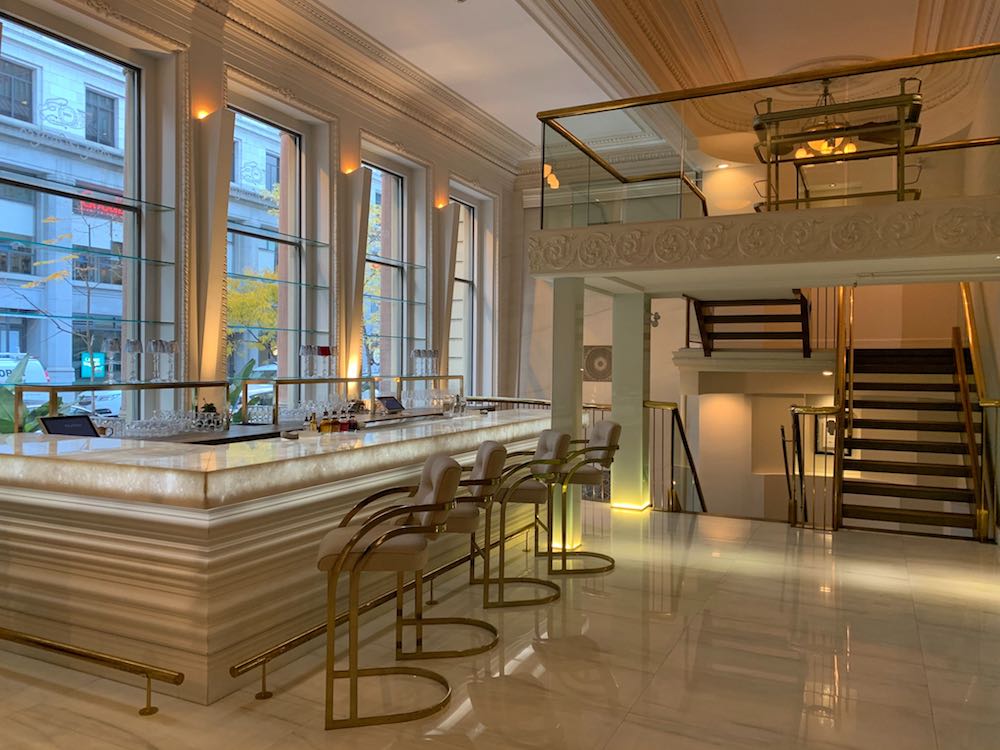 Entering the space, it becomes immediately clear that this is not your average pasta spot. Boasting a crisp, white colour scheme with gold and marble accents, it feels like you’ve walked into a jewelry box.

One that’s filled with the aroma of spices. 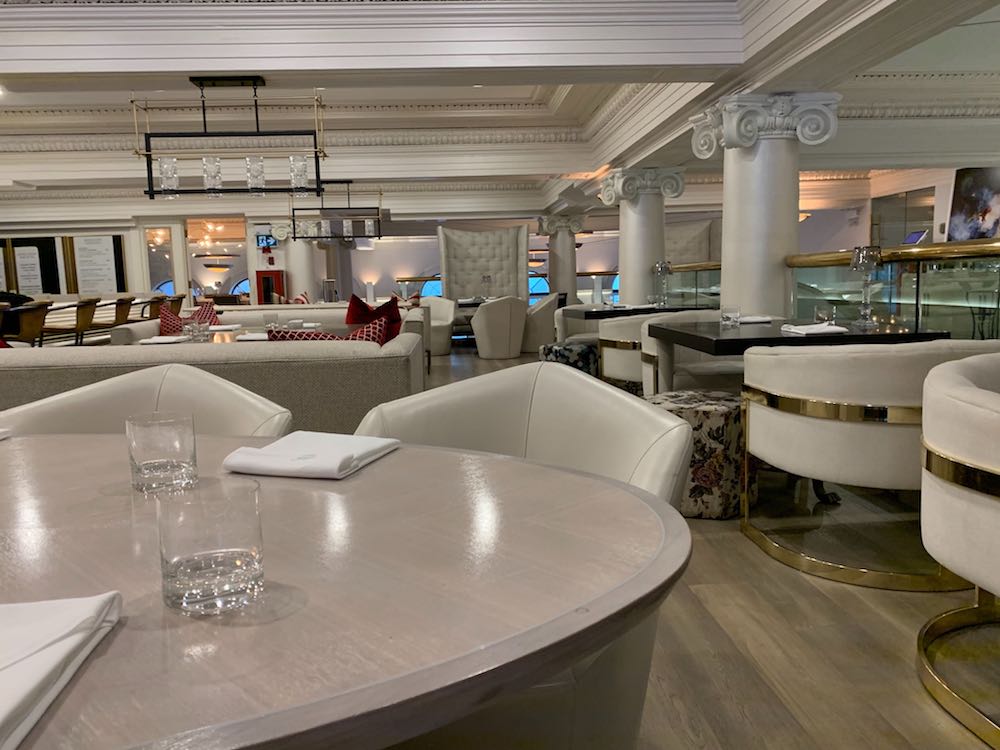 Step through the front door and you’ll be faced with the first of the spot’s bars. And to it’s right, a stairwell leads you up to the mezzanine, which offers views of the bar and dining space below. 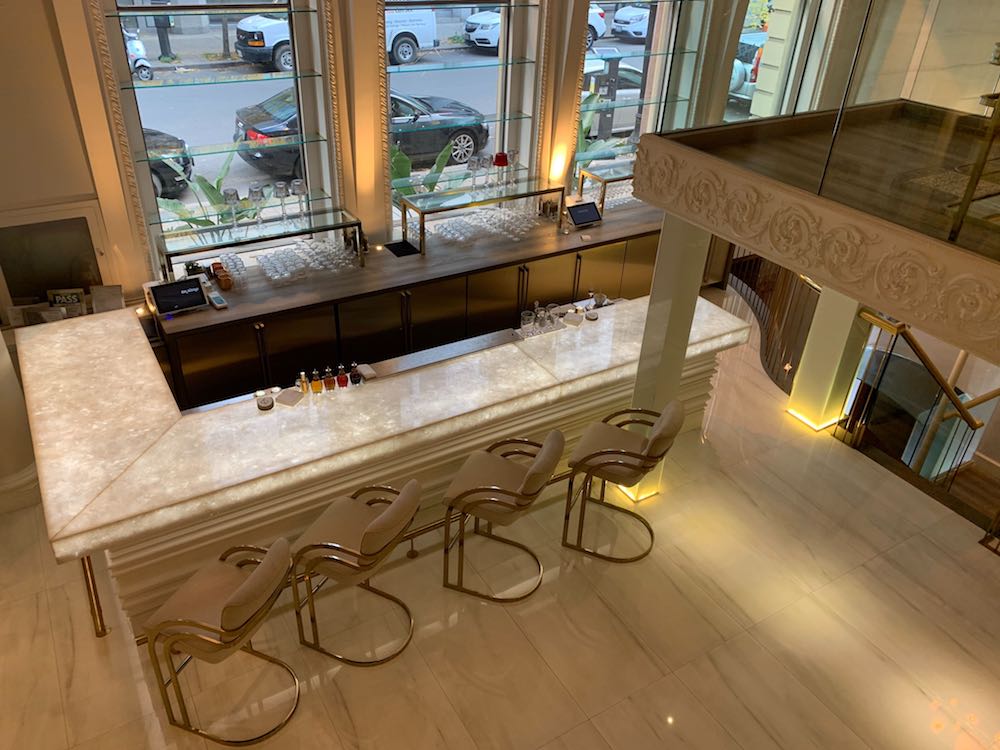 In addition to fine food, Don Alfonso offers an extensive cocktail program, which is evident from the bottles upon bottles tucked onto the shelf at the mezzanine’s bar.

With the choice of bar stools, comfy lounges, or proper chairs, the upstairs space offers many options for seating.

And hidden beside the bar, you’ll find the restaurant’s private dining room.

Lit by the golden glow of a massive fixture above the table, the space is cozy without being stuffy, as massive windows allow for viewing the dining room below. 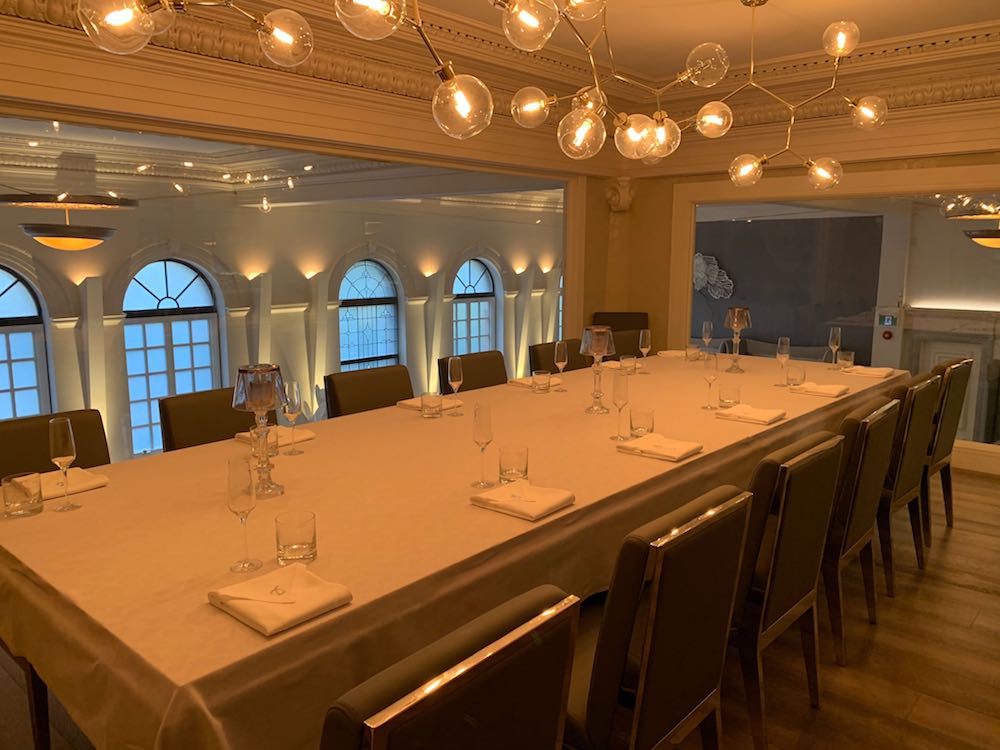 Which is immaculate, crisp, and classy. Like the mezzanine, the dining room offers a wide range of seating options including booths, tables, and chaises set against the walls that are almost reminiscent of thrones.

Fitting, because simply passing through the space can evoke feelings of regality. 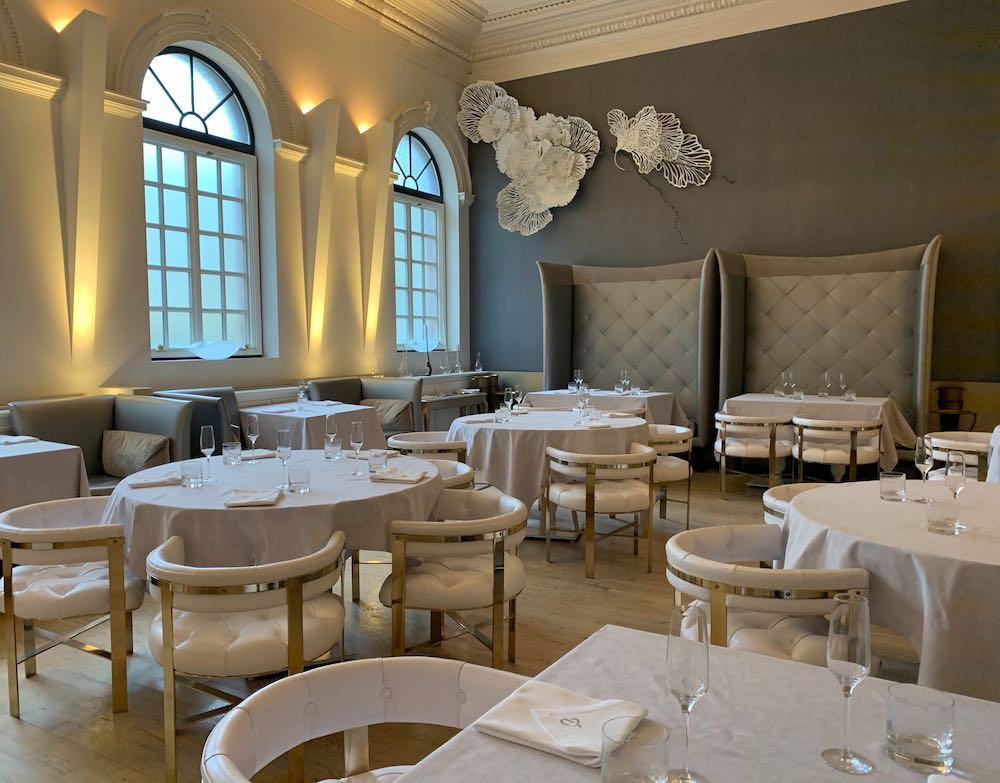 From the dining room, you have clear views of the open-concept kitchen.

Talent work diligently in the lofty space, hours before the restaurant opens for dinner service, to ensure that classics like the Bison in Rustic Bread Crust are ready for fresh and prompt preparation. 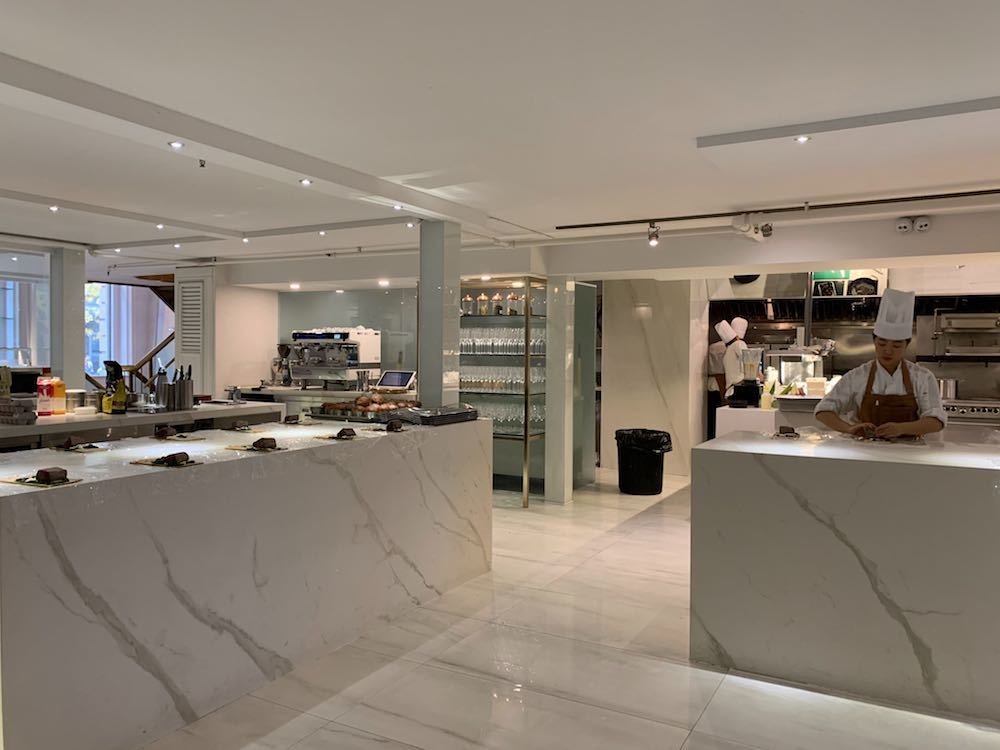 Made with Canadian tenderloin, the dish is a favourite amongst diners and stays on the restaurant’s menu, year-round. 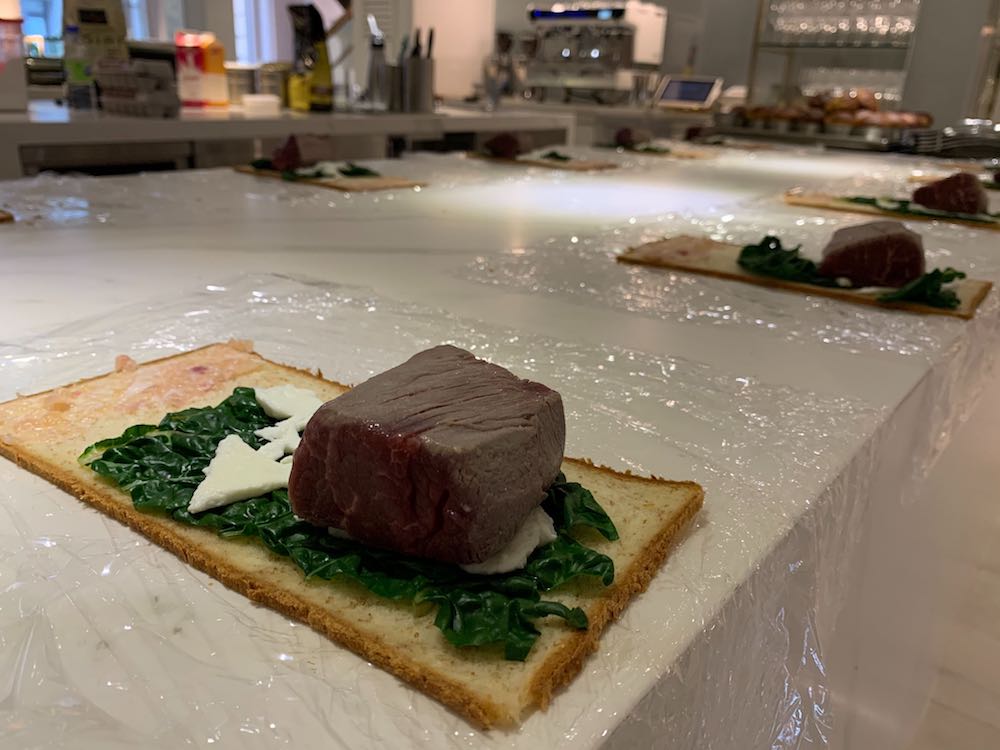 Before sitting down to dine, you’d be remiss to not peek into the wine cellar. With hundreds of bottles lining the walls and spiralling up a staircase, the space is fully-stocked… but there’s certainly enough room for a small tasting party, if desired. 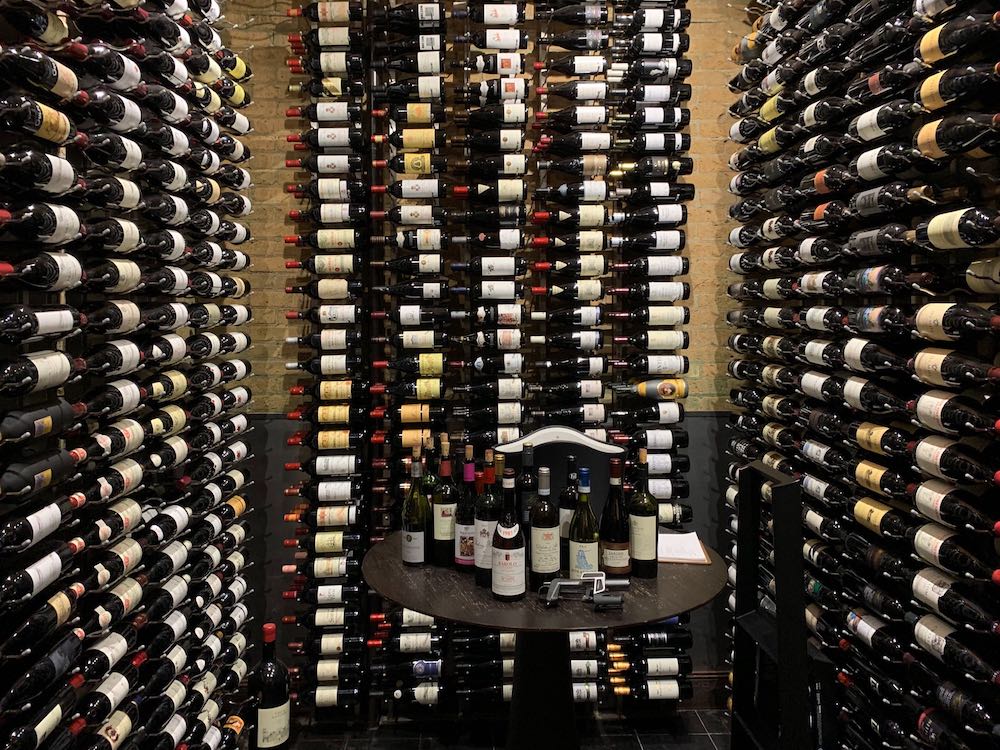 Once you’ve taken in the beauty of the space and tasted enough wine to get you grinning, there’s only one thing left to do. 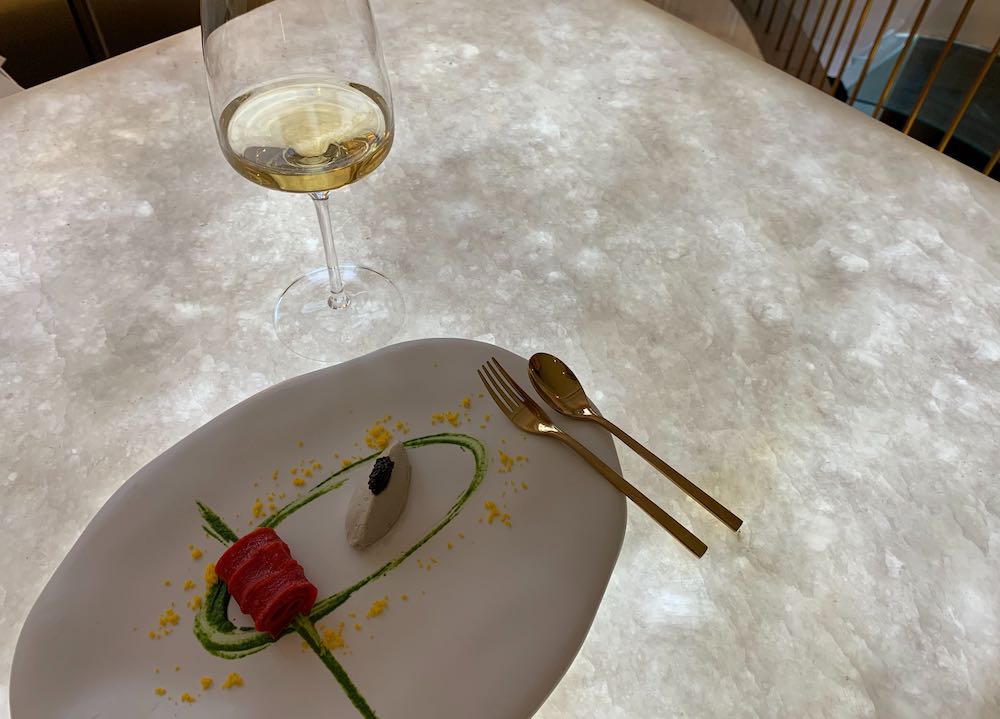 Don Alfonso offers a series of menu options including A La Carte, Classic, Contemporary, and Pre-Theatre. The Ice Creamed Eel is first up on the Classic Menu’s “collection of canapés,” and is also listed on the A La Carte selection.

At $24, the dish consists of creamy eel topped with sturgeon caviar, and paired with tagliatelle that’s scented with wild rose. To complete the offering, the plate is graced with a mince of wild herbs and sprinkles of pulverized egg yolk. 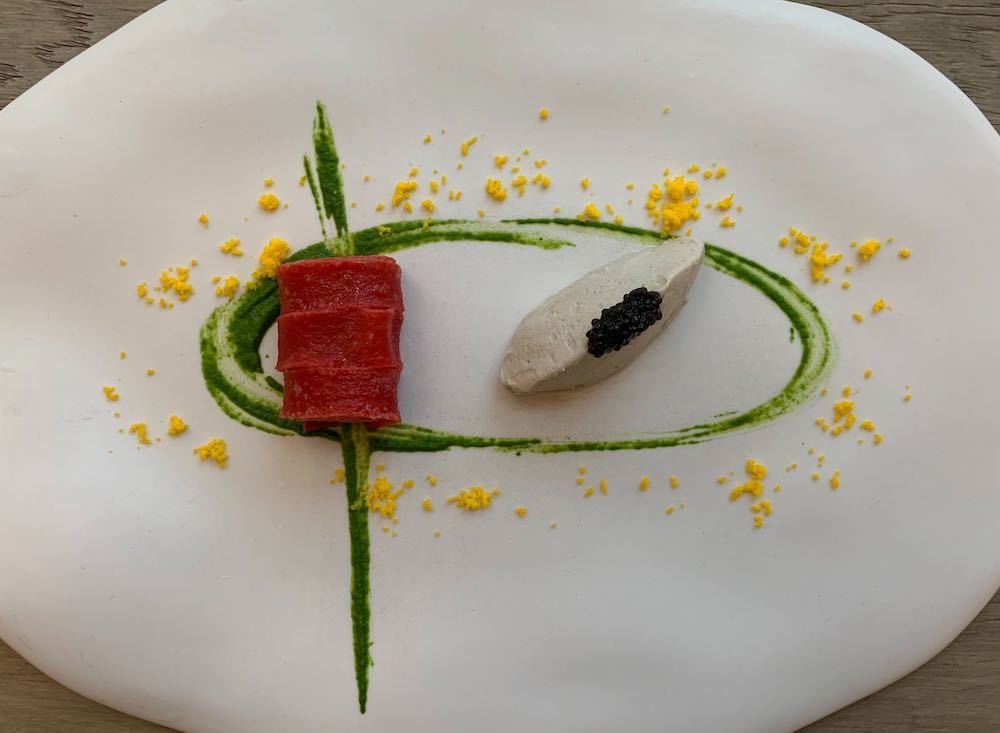 The eel is mousse-like in texture — think of an airier pâté. It pairs perfectly with the delicate pasta, which offers the most subtly, botanical flavour. 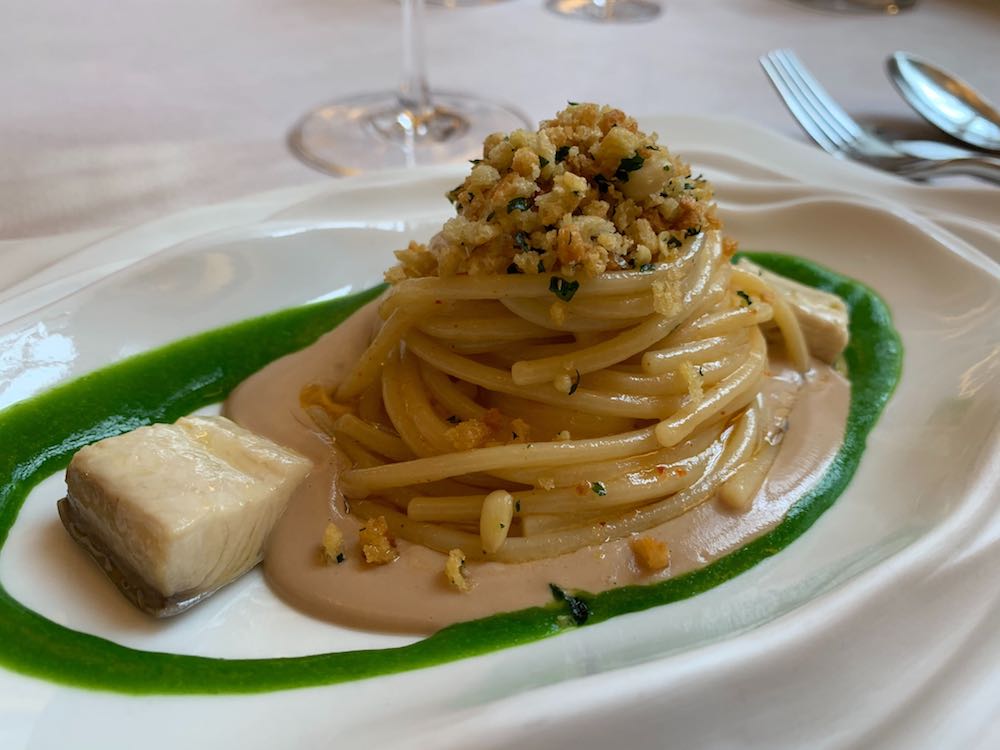 The Vermicelli di Gragnano Mackerel in Carpione Style is a $28 pasta option, available on the A La Carte menu. To make it, Sicilian pine nuts and caramelized onions come together over pasta that rests on a bed of alalunga tuna purée sauce.

Bringing forward feelings of Panko-crusted delights, the crunch of the nuts adds something nostalgic and childlike to an otherwise mature, poised, and inspirational plate of pasta. The sort of pasta that you’d like to grow up to become. 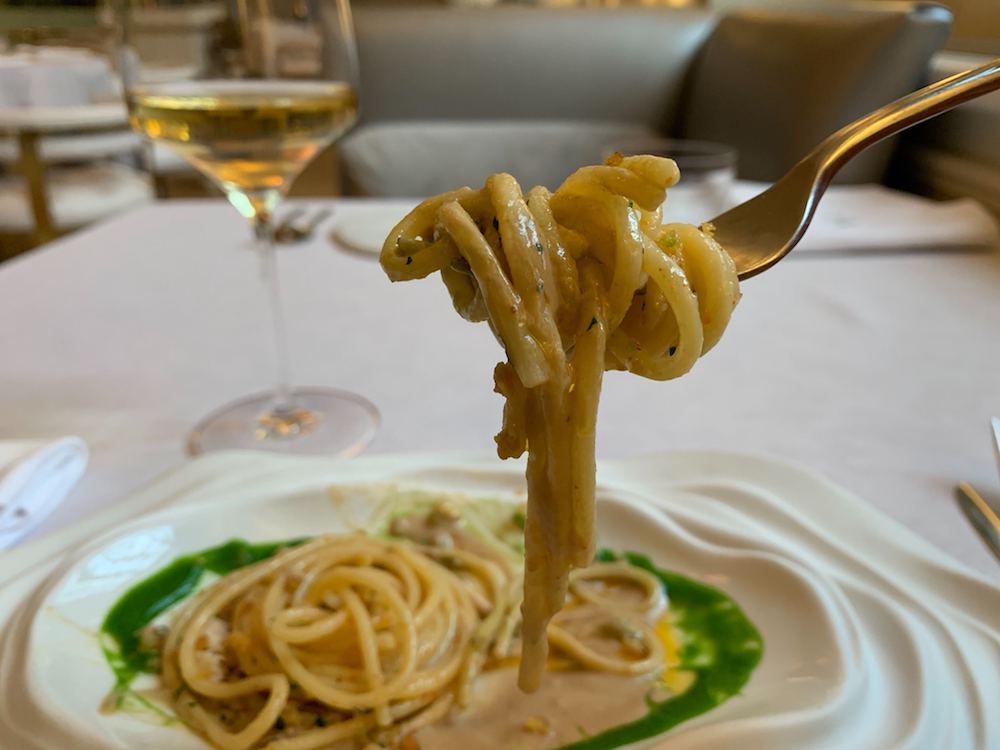 The fish is soft and tender; if you haven’t enjoyed fish with pasta before, this is the place to start.

No question, the best of the experience hits once you’re a couple bites in. The plate starts to get messy and the flavours begin to blend as the magic of each ingredient works together to take your tastebuds to new worlds. 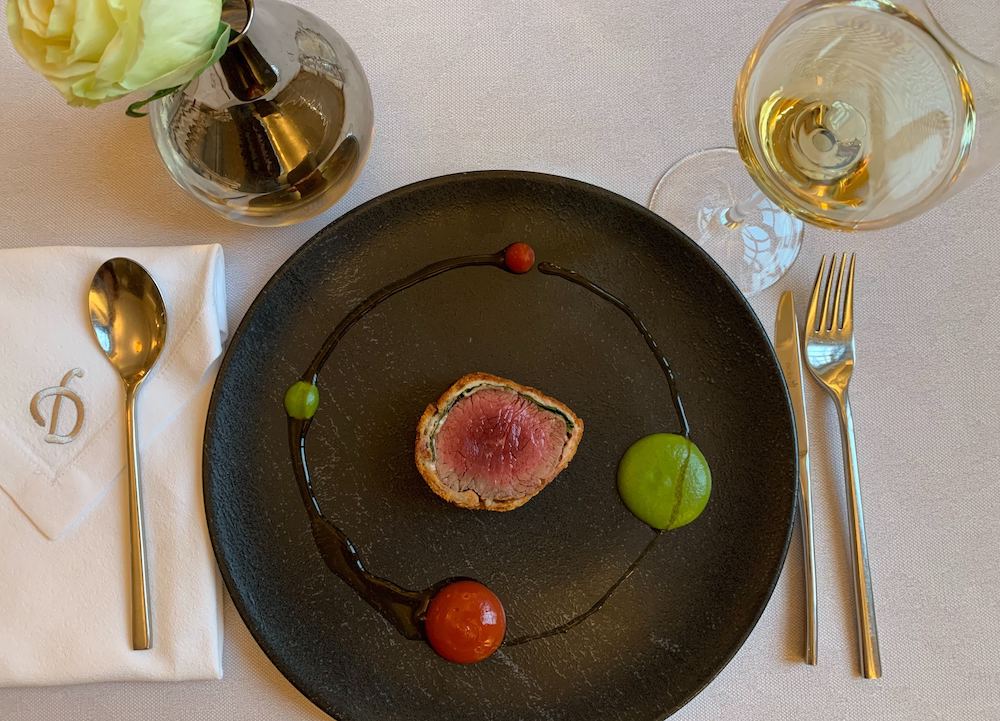 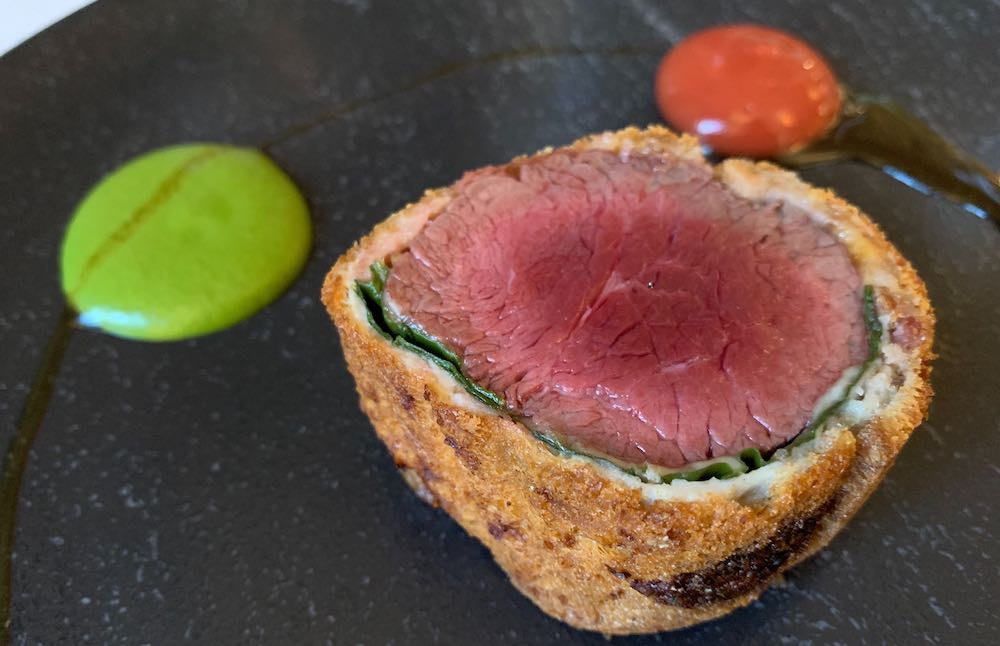 If smell could be translated into words, it would still be unsure if the right ones would exist to describe this dish’s aroma. Once tucked into, what was at first a mouthwatering tease quickly becomes phenomenally satisfying… like love at first bite.

The plate comes with a $48 price tag, but if you’re a sucker for the finer things in life, it’s likely an investment you won’t regret. 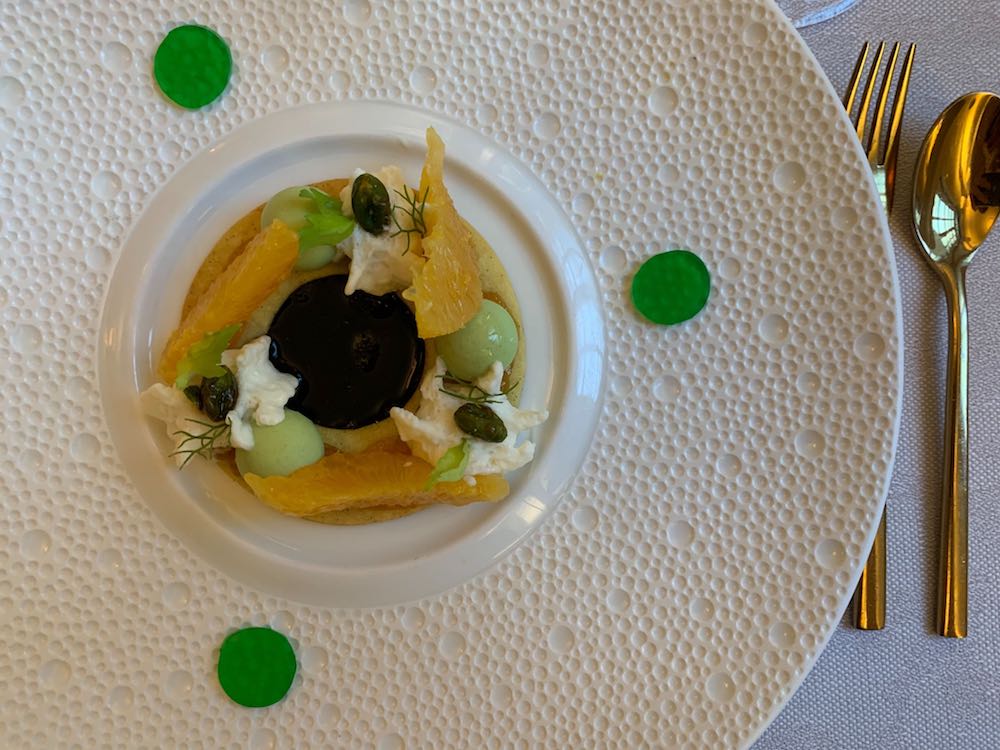 Dessert options are vast, and the Mediterraneo is an excellent choice for those who want to feel like they’re escaping the city.

Pistacchio ravioli, fresh Sicilian orange, basil and lemon gelatina and buffalo ricotta grace the top of a shortbread cookie, the centre of which is filled with black licorice. 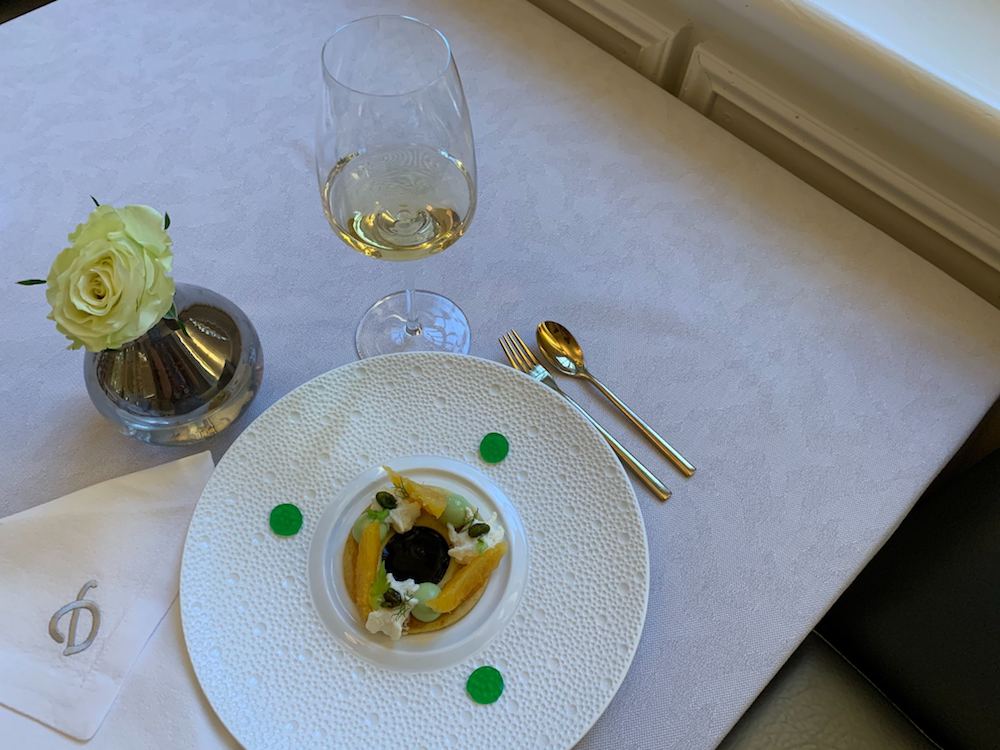 And if there’s one thing that’s particularly shocking about the $16 plate, it’s the oranges. The citrus tastes not of this earth and could easily stand as a scrumptious dessert, all on its own.

Chef Saverio Macri says that the restaurant only uses the very best for all its ingredients.

But, of course, the juicy fruit potentiates the rest of the sweetness it’s paired with, coming together to create a treat that’s both a proper meal finale, and a proper art piece. 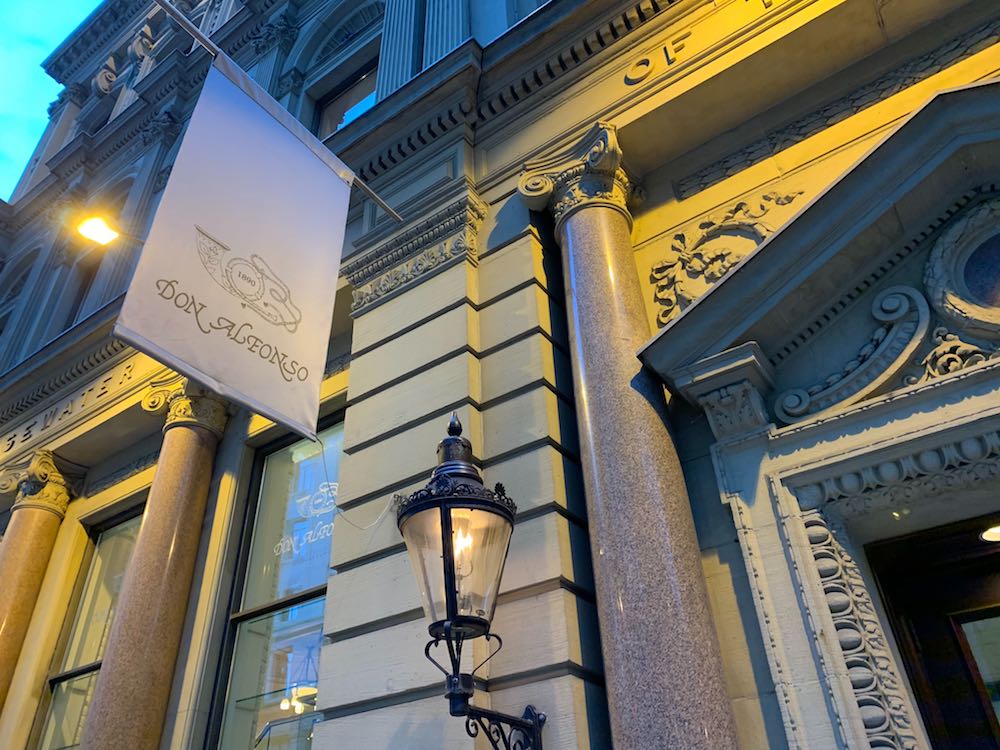 Whether you’re seeking a space to hold an important meeting, enjoy a celebration, or embrace a just-because indulgence, this spot is serving something for you.

So the next time you stroll past Toronto Street, think twice before you walk on by.