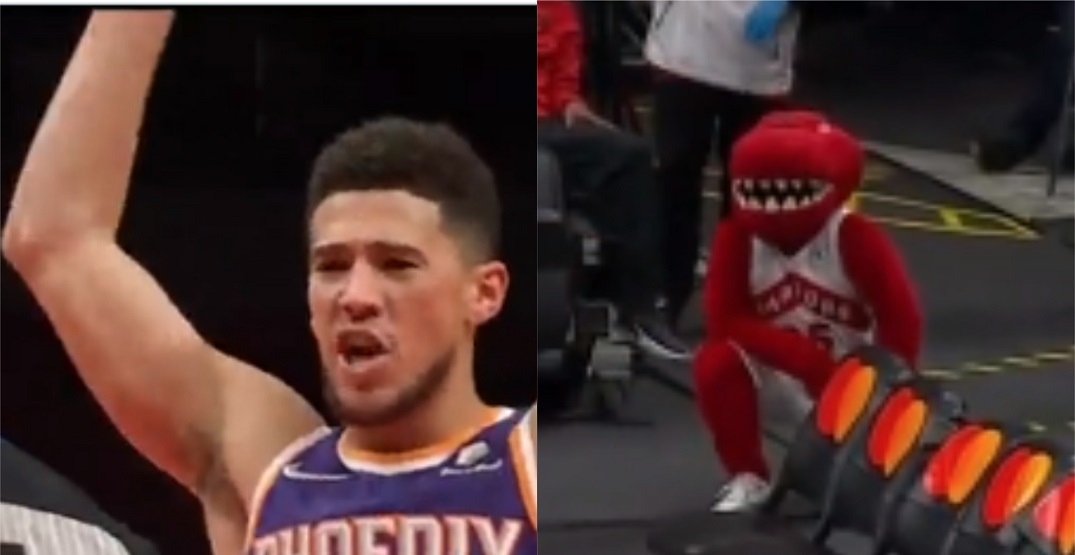 Devin Booker is one of the NBA’s best players, but it appeared a new weakness of his was revealed while playing the Toronto Raptors.

In the closing stages of an eventual 98-95 win by Booker’s Phoenix Suns in Toronto, Booker was distracted while shooting free throws.

In an otherwise mostly empty arena without fans due to COVID-19 restrictions, “The Raptor” mascot threw Booker hard enough off his game that he found it necessary to complain to the referee.

The Raptor lives rent free in the heads of his opponents. 😂 pic.twitter.com/7GOgV5qBJ0

The referee obliged, shooing “The Raptor” into the corner of the arena.

TSN’s commentary crew ate it up.

“I mean, there’s nobody in the gym,” Matt Devlin quipped.

“You played at Kentucky in the SEC!” Jack Armstrong fired back.

“Imagine if Superfan was there?” Devlin added.

It is a little funny to imagine a two-time All-Star who’s shooting 87% on free throws this season to be distracted by a mascot.

But perhaps since the Suns were victorious, Booker isn’t holding any grudges.

“We hashed it out,” Devin Booker said postgame. “We homies now.”

No statement has been put out by the Raptor on his official social media channels.

However, it wasn’t the only antic the Raptors operations team was pulling.

The Raptor’s larger friend (brother? cousin?) of the inflatable variety was also used intermittently throughout the game.

Just a regular play. Nothing out of the ordinary to see here. 🦖 pic.twitter.com/RVbYFmPP4t

Raptors fans ate it up on social media.

When CP24 is filming a segment so you pretend to walk by unknowingly so you can watch yourself after on the news pic.twitter.com/evsrcZ7YVo

The Inflatable Raptor got me dead lmaoo

The Raptors won’t have any home-court advantage in the near future, though. They travel to Detroit on Friday to kick off a five-game road trip, with their next home game set on January 23 against the Portland Trail Blazers.