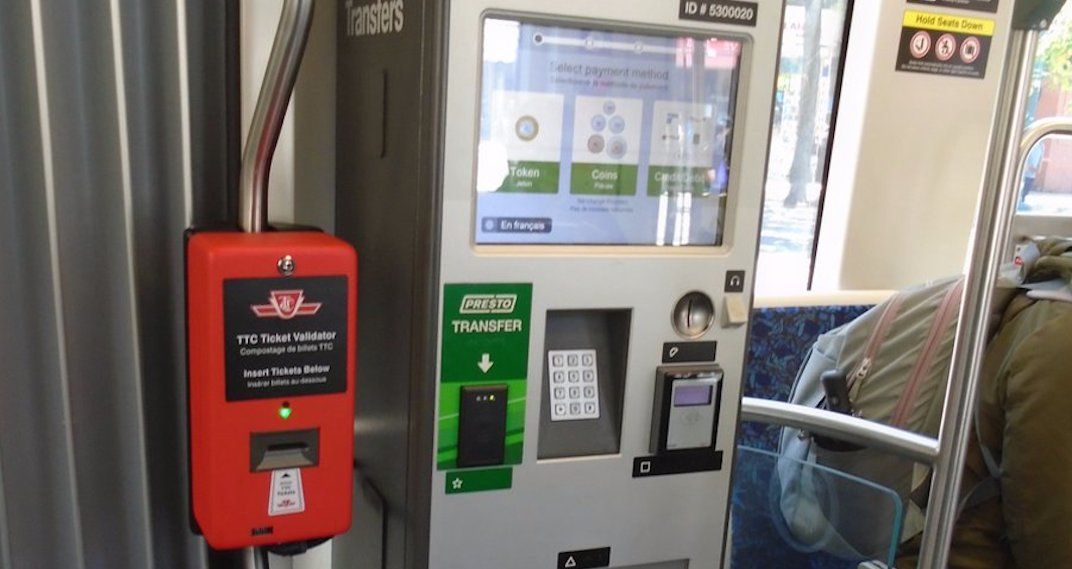 Streetcar riders who rely on paying with debit or credit cards are being encouraged to switch to alternative forms of payment as the card options are being removed from fare machines onboard low floor streetcars.

On Tuesday morning, the transit authority announced that between now and December 20 the card payment options will be removed as they are causing the machines to be unreliable.

“Customers are encouraged to switch to PRESTO or pay their fare by cash, ticket or token,” the TTC said in a tweet.

Between now and Dec20, the debit/credit payment options are being removed from the Fares and Transfers Machines on our low floor streetcars as they were causing the machines to be unreliable. Customers are encouraged to switch to PRESTO or pay their fare by cash, ticket or token.

TTC spokesperson Heather Brown said a joint decision was made between PRESTO and the TTC to remove the debit and credit option in an effort to improve their overall reliability.

Brown said while “we would like to provide as many options as possible to our customers to pay their fare on these vehicles, those customers who currently pay by debit/credit are encouraged to switch to PRESTO.”

Anne Marie Aikins, a spokesperson for Metrolinx, which owns the Fare and Transfer Machines, says, “we have been disappointed in the performance of these machines and have been closely monitoring them. ”

Aikins added that Metrolinx recognizes this “may be an inconvenience” to a small percentage of customers who still use debit and credit.

“However, they can use one of the many other means of payment available – PRESTO cards, tokens and cash,” Aikins said.

However, the transit authority isn’t completely eliminating debit and credit payment, as customers can still pay with these cards at the Fare Vending and Self-Serve Reload Machines.

“We encourage cash, ticket and token customers to switch to PRESTO at any time. PRESTO is available on all streetcars, buses and at every subway station,” said Brown.

PRESTO cards are available at Shoppers Drug Mart locations, from PRESTO Fare Vending Machines at every subway station, online, and from the TTC’s Customer Service Centre above Davisville Station.