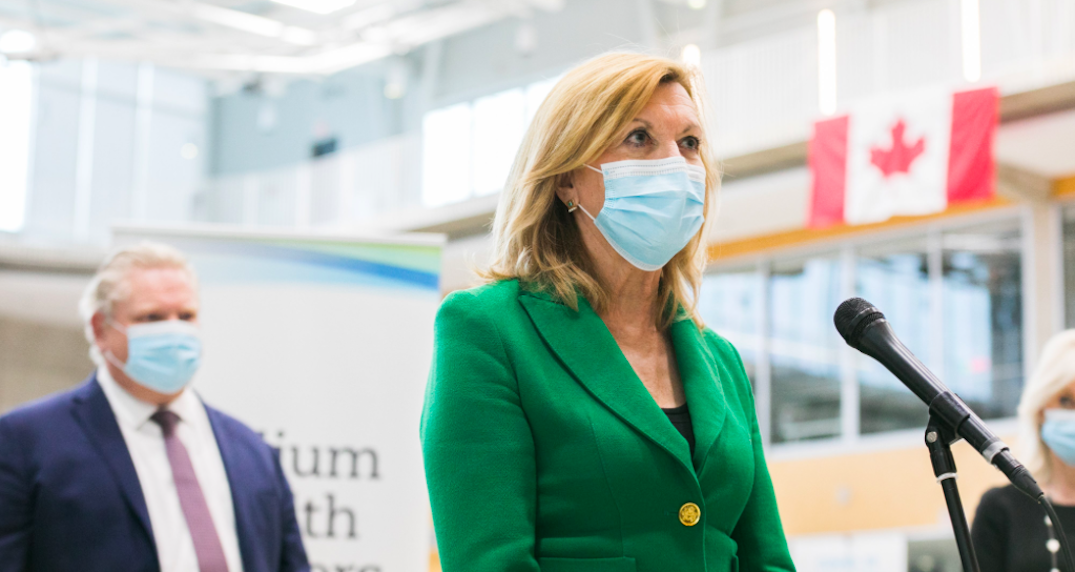 Data collected from Ontario’s latest COVID-19 cases suggests infection after full immunization is rare, and contracting the virus after one dose is uncommon.

Over the last six months, the majority of new infections have been in unvaccinated people, health officials revealed during a technical briefing Thursday.

Becoming infected with COVID-19 after seven days since receiving a second shot is considered a “breakthrough case.” Health officials say these are extremely rare, although they do happen.

The experts reminded people to get two shots as soon as possible and that immunity doesn’t kick in until about 14 days have passed since the jab.

“It shows how important it is to get a vaccine and get protected,” Solicitor General Sylvia Jones said at a press conference alongside Health Minister Christine Elliott Thursday.

Over half of all adults in Ontario are fully vaccinated!

As we prepare for Step 3 of the Roadmap to Reopen, we want even more Ontarians to benefit from a 2 dose summer.

If you are 12+ and haven’t received your #COVID19 vaccine, book your appointment now: https://t.co/IcpDOgfQmU pic.twitter.com/k6CydTymKc

More than half of Ontario adults are now fully immunized, and the province has moved quickly to increase the percentage of those with their first dose up to 78%.

Health officials shared the information Monday, where they said 16.3 million doses have now been administered, and 51% of people in Ontario age 18 and up have both shots.

They compared Ontario’s first shot data to other countries around the world, suggesting the province has been successful in encouraging people to roll up their sleeves for a first shot.

Currently, more Ontarians have at least one dose than in Israel and the US (although those jurisdictions have more people fully vaccinated). 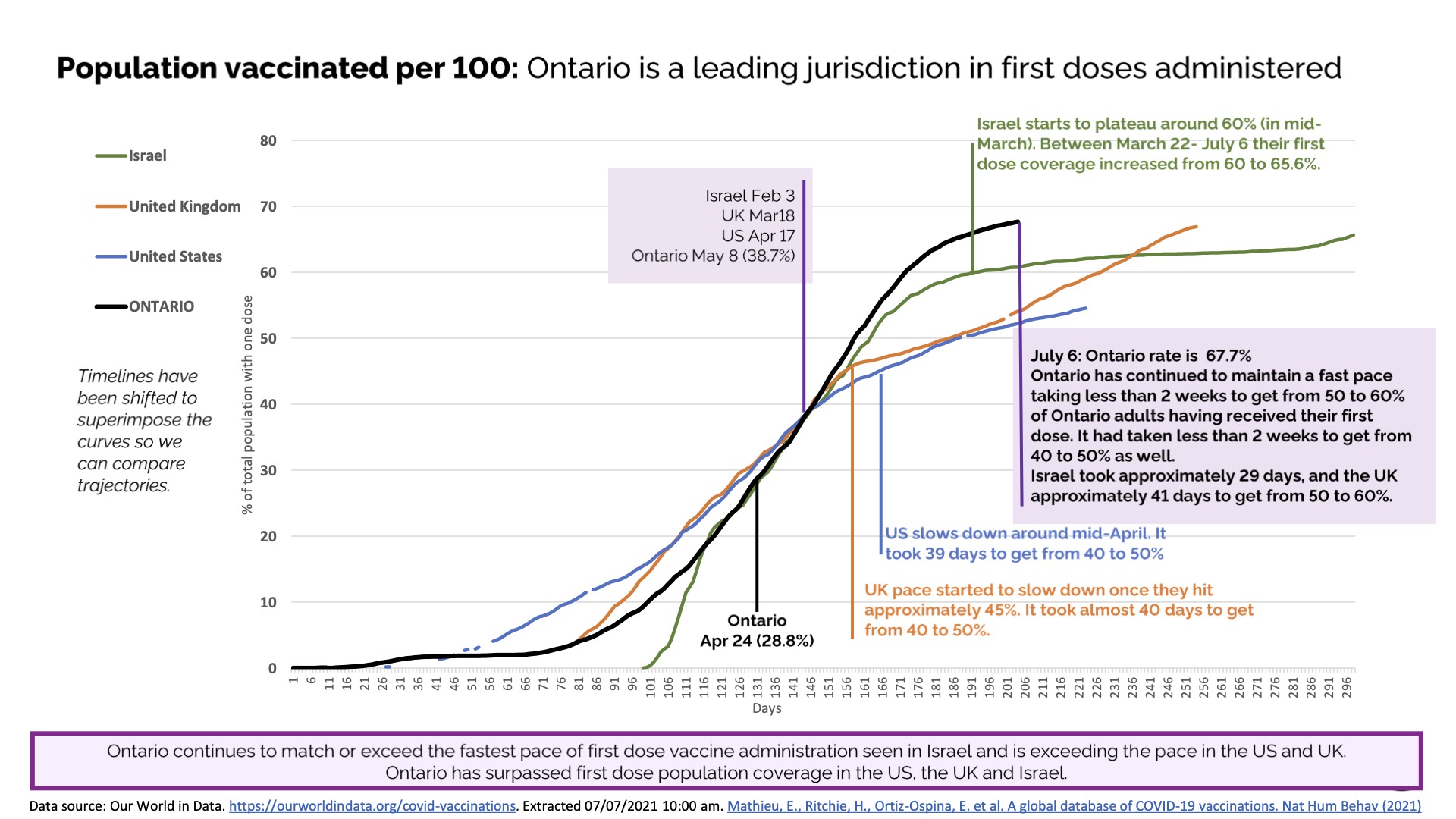 Everyone 12 and up across the province is now eligible to book their second shot, an acceleration from the province’s initial estimates. 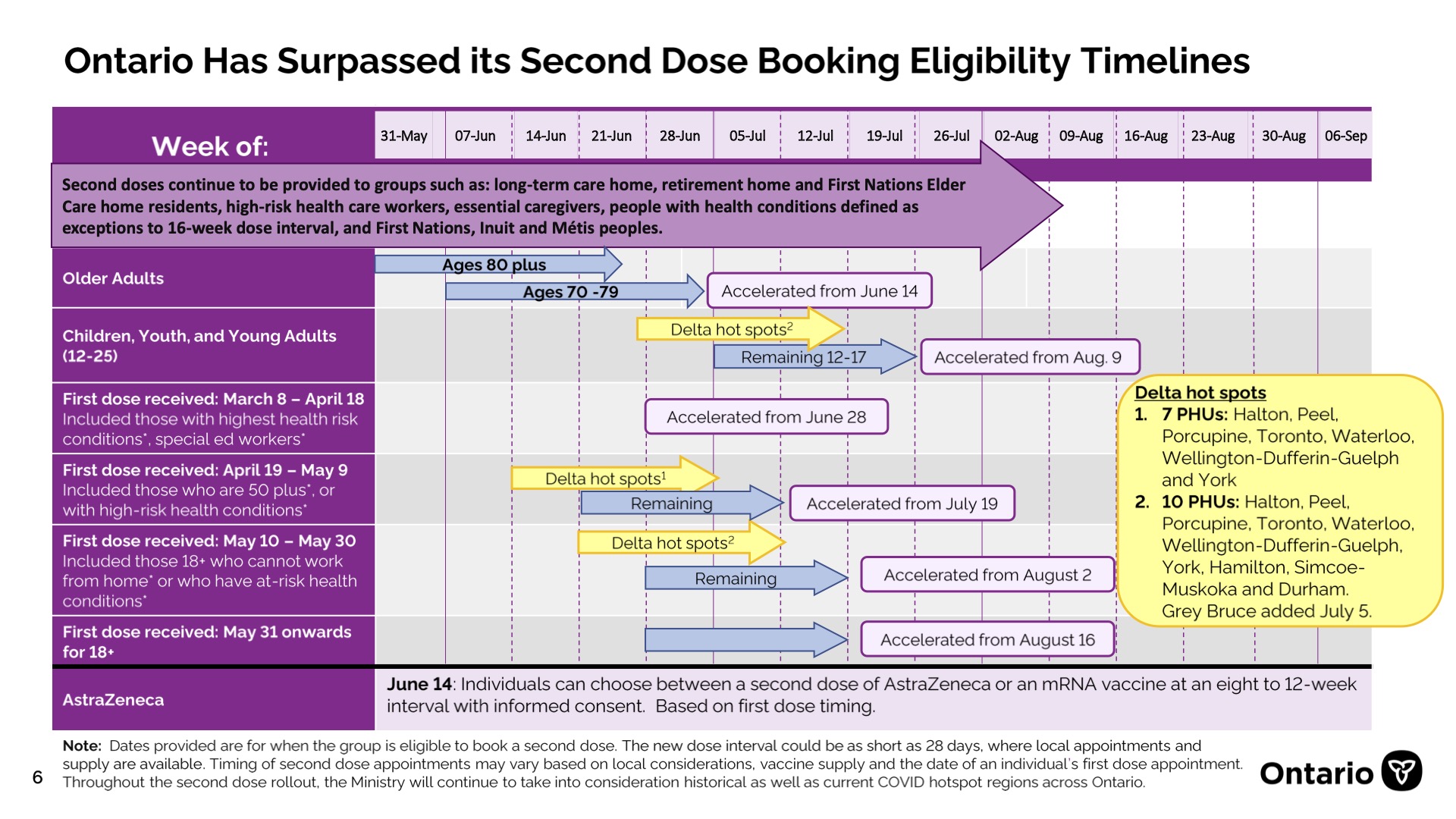 Another five million doses of Pfizer and Moderna are scheduled to arrive in July, meaning booking a shot could get easier in the coming weeks.

The Delta variant continues to be a concern for Ontario, and the province designated Grey Bruce a Delta hotspot on Thursday. Officials are targeting these regions for vaccination to prevent Delta outbreaks from spreading across the province.