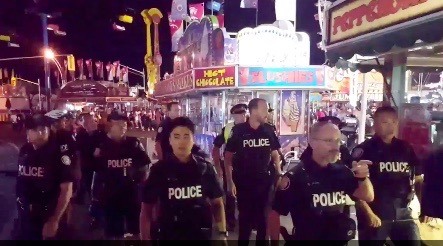 For the second year in a row ‘Youth Day’ at the CNE acted its age.

Thanks to overcrowding, fights breaking out, and the report of gun shots (which police later confirmed was false) the CNE was shut down a half hour early.

SOUND OF GUNSHOTS
The earlier call for shots heard at the CNE is believed to be a false call. ^cb

In a statement on their Facebook page last night, The CNE had this to offer:

The CNE is experiencing one of the busiest nights of the Fair as a result of the popularity of Youth Day. CNE organizers are winding down operations early as a proactive measure to curtail overcrowding and ensure the safety of our guests. We have deployed additional staff and external resources to facilitate the imminent exit of an exceptionally large number of visitors, especially younger patrons who rely on public transit to safely get home.

It wasn’t long before a large number of police were called in to escort people safely from the premises:

.@TorontoPolice escorting everyone out of the midway area at CNE. Large crowds to deal with. pic.twitter.com/p8tOY7lAo6

Below are a couple of videos of the mayhem that lead to the decision to close the fair down early. Youth Day provides a reduced cover ($6) for those 17 and under if they enter the fair before 3 pm. Though, after two years of having to shut down early, the night’s safety and future are being heavily called into question.

CNE shut down because of this fight. #CNE #CNEFight pic.twitter.com/dW0W2LChD7