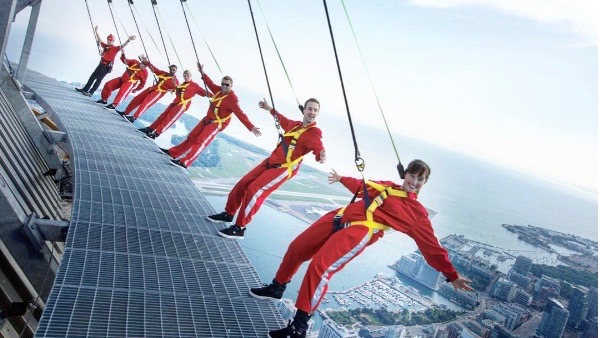 Imagine someone saying to you, ‘hey, if you give me $200 I’ll let you walk around hands-free on top of the CN Tower.’

And yet, thousands of people choose to live on the edge of the CN Tower’s 356 metre (1,168 foot) drop. Not only that, they pose like a bunch of maniacs.

Well, today we say cheers to those brave enough to take the first step out into the stratosphere – and salute their poses at the same time.

Dab on the tallest tower in the Western Hemisphere 🇨🇦📍 #EdgeWalk

Last year, he took me to the 360 Restaurant. This year, I took him on a 360 of my own… 😉 #anniversary #cntower #edgewalk #1100feet #daredevils #views #feetofftheedge #leanback #adrenaline #myidea #guinessworldrecord #toronto

When they told you Canada was cold and you believed them

And finally, when you’re Drake

Now you know where Aubs got his dumb album cover idea from. #cntower #edgewalk #Safe&Fun