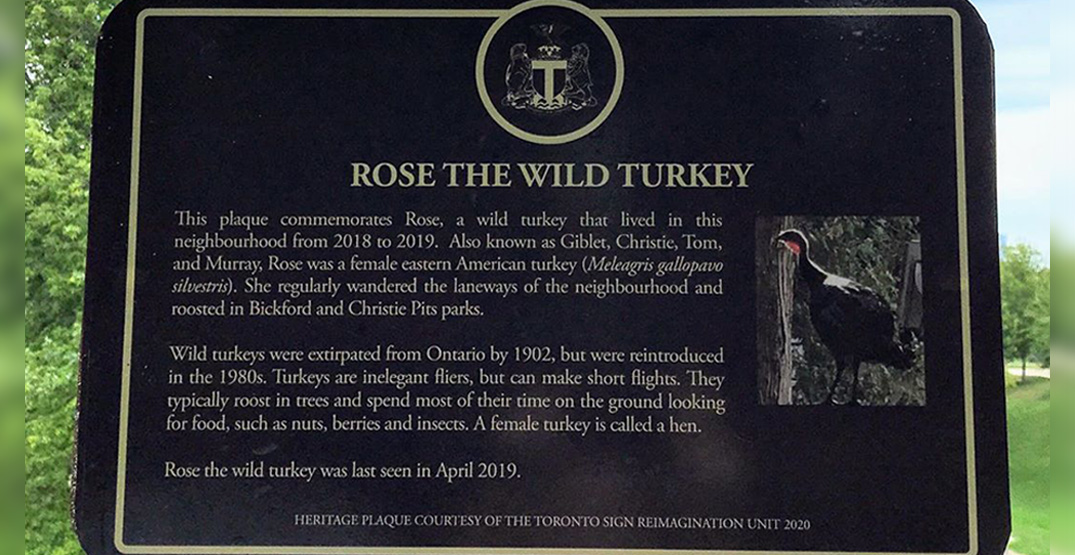 A less-than-official heritage sign has been erected in Toronto, paying respects to a wild turkey that once lived in the Christie Pits neighbourhood.

The product of a group of mischievous artists known as the Toronto Sign Reimagination Committee, the faux heritage sign pays homage to a real local hero, Rose the Wild Turkey.

“This plaque commemorates Rose, a wild turkey that lived in this neighbourhood from 2018 to 2019,” the sign reads. “Also known as Giblet, Christie, Tom, and Murray, Rose was a female eastern American turkey.

You are an impressive specimen, o turkey. pic.twitter.com/tINlqgdroK

“She regularly wandered the laneways of the neighbourhood and roosted in Bickford and Christie Pits parks.”

Reportedly not seen since April of 2019, Rose was both loved and feared by her neighbours. Once even garnering a series of complaints over a “wild turkey loose,” according to Toronto police at the time.

🎵 Im off the deeeeep end watch as I dive in 🎵 https://t.co/qKbK8ItjvT

City councillor for Ward 11, Mike Layton, said on social media that he’s heard a series of different reactions from residents about the bird.

“Some neighbours dislike him. Some are afraid. Most enjoy the spectacle,” he wrote in 2018. “This neighbour on Crawford likes the respectful relationship they have (from the safety of his kitchen window).”

I’ve received a range of reactions to the Christie Pits Wild Turkey (been around almost a year). Some neighbours dislike him. Some are afraid. Most enjoy the spectacle. This neighbour on Crawford likes the respectful relationship they have (from the safety of his kitchen window) pic.twitter.com/HCR5OFJdbh

It also appears that at least one admirer set up a Twitter account for the hen, though her disappearance came shortly after in April of 2019 — potentially after complaints for walking in the street — and Rose may have been removed by animal control.

According to the sign, wild turkeys were extirpated from Ontario by 1902, but were reintroduced in the 1980s.