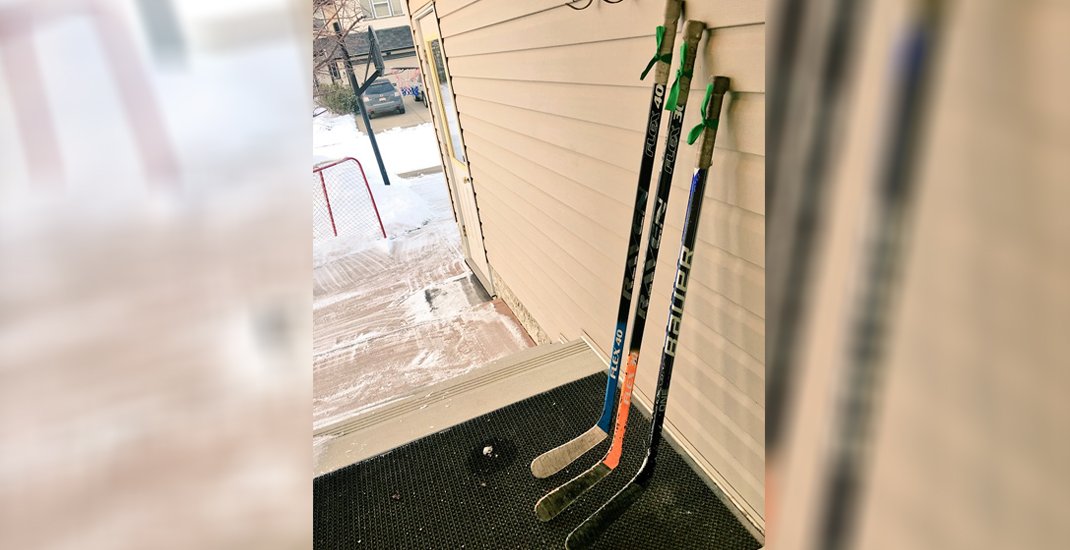 The sports world is showing its support for the 15 Humboldt Broncos players and staff killed in a tragic bus collision by placing hockey sticks outside of their homes.

Social media channels have been flooded with photos of hockey sticks lined up outside of people’s homes, trending under the hashtags #SticksOutForHumboldt and #PutYourSticksOut.

The symbolic gesture picked up steam following an emotional vigil Sunday evening at Elger Petersen Arena in Humboldt, the home of the Broncos.

The response has been overwhelming, with hundreds of people from around the world posting photos of their tributes on social media.

Here in Canada, photos of sticks placed on porches and at an outdoor skating rink have been shared.

The boys and I put our sticks out on the porch tonight. #HumboldtStrong #Broncos pic.twitter.com/qidZFDqHQE

Leaving one out on the porch for the #humboldt boys, they might need it. pic.twitter.com/6RoQ4xik6E

We are with you in Yorkton pic.twitter.com/gZ96sfZ22G

“maybe we should leave some sticks by the rink tonight buddy”….. “dad, I like that idea” #HumboldtStrong pic.twitter.com/ZCQxdkx3sO

The gesture was even picked up in the US, with hockey families and players sharing their own touching tributes.

In honor of the #HumboldtBroncos we will leave our sticks out with the lights on in Pittsburgh. #putyourstickout #HumboldtStrong pic.twitter.com/O1e0QZdMGM

It’s 70 degrees in Florida, but it’s hard to enjoy the warmth knowing how hard it must be in Humboldt. Sticks are out, lights are green, hearts are broken. Stay strong, Bronco Nation. #PutYourStickOut pic.twitter.com/Xeo6b32f1o

Easiest decision ever. Just in case they want to play hockey in the sun for a bit, here’s one left out in Phoenix. #HumboldtStrong pic.twitter.com/Oga4wiLjo1

From the OC. Rest In Peace Boys pic.twitter.com/xnAIJqi54j

One of the guys can use mine. It shoots a little high, but it should work just fine pic.twitter.com/DUMrkYtfbw

The Jakarta Dragons, a hockey team from Jakarta, Indonesia, even shared a tribute on Twitter.

The crash has touched the hearts of people from around the world and received an incredible outpour of support and sympathy.

Following the crash, a GoFundMe crowdfunding campaign was set up by Humboldt resident Sylvie Kellington to raise funds for those affected by the tragedy.

At the time of publication, the campaign has raised over $5 million in donations by over 72,500 people in just two days, making it Canada’s most generous GoFundMe campaign ever.