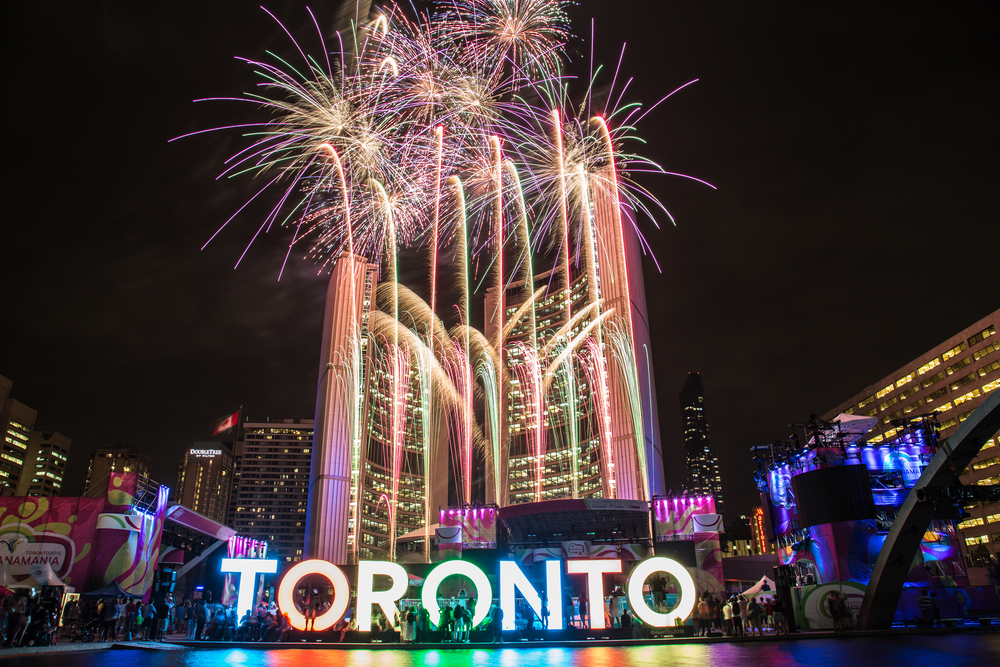 With so much going on around town this weekend, here are some events to check out while dressed in your finest red and white. And make sure you catch some fireworks!

A massive celebration is taking place on Toronto’s central waterfront for Canada’s birthday. Musical performances, activities for the kids, and the day concludes with an awesome display of dazzling fireworks on the waterfront. How romantic.

Family entertainment and Canada Day celebrations await you at the annual Queen’s Park party. Food is available for purchase, but don’t forget to bring your reusable water bottle – there will be a water station on site. Music, face painting, and rides… and did we mention a lot of food?

Steam Whistle Brewery hosts a Lobster Boil in a traditional East Coast celebration of Canada Day. Lobster and Beer – who can say no to that? Two seating times are available, and the $25 ticket gets you a full lobster and two sides. YUM!

Get the OMs in early, and for free, at the Canada Day Yoga event at High Park. Hosted by Breathe Yoga Studio, the event offers cake, prizes, yoga, and a ton of fun.

Toronto’s concert and picnic series is back in its fourth year, with a massive curated line up that spans over four months. With its next concert scheduled for this weekend, Electric Island ends this year’s series with the Labour Day festival.

Celebrate Canada Day among the cutest animals in the city! Canada Day at the Toronto Zoo is all about family fun, and make sure to take part in their Parks Canada Explorers Booklet challenge to receive a special souvenir.

Head down to Yonge-Dundas Square and be part of the “Living Flag.” Hosted by the Community Folk Art Council of Toronto, the Multicultural Canada Day celebrates with live performances from around the world, crafts and food. Culture at its finest.

Where: Yonge-Dundas Square
When: July 1, Noon to 9 pm

The big 149th birthday celebration this year is at Mel Lastman Square, with a fun-filled evening of music, dance, and family activities. Of course, all of the day’s excitement ends with the fireworks show choreographed to music!

The 2016 Canadian Defence Trials will go down on Lake Ontario off the Toronto Island this July to determine who will defend the Canada’s Cup against the winner of the US Challenger Trials.

Speaking of boating… The Redpath Waterfront Festival returns bringing with it tall ships to our harbour. Great family fun and unique way to celebrate Canada Day!

What The Film Fest

The Laser Blast Film Society presents a three-day showcase of the “weirdest and wildest movies and media that” they could assemble.

Where: Various venues
When: On now until July 2

One of Canada’s largest Latin-themed celebrations is Toronto’s TD Salsa in Toronto Festival, which takes place over three weeks and features music, food, dance and family events. It all starts this weekend!

Where: St. Clair Avenue West, between Winona Drive and Christie Street
When: On now until July 17

One of the biggest electronic music festivals returns with a massive line up including Above & Beyond, Armin Van Buuren, Bassnectar, and so much more. Continue your long weekend in a state of trance.

Where: The Flats at Ontario Place, 909 Lakeshore Blvd West
When: July 2 to 3

A festival that needs almost no introduction, the Beaches International Jazz Festival is celebrating its 28th year. This year’s festival is bigger and better, and spans almost the entire month of July. And we are excited.

Where: The Beach Neighbourhood
When: July 2 to 24

Catch a theatrical production this weekend! A very Toronto theatre experience, in the heart of High Park. In its 34th year, Toronto’s High Park and Canadian Stages presents Shakespeare’s Hamlet and All’s Well That Ends Well.

Where: High Park Ampitheatre, 1873 Bloor Street West
When: On now until September 4

Get ready for the hottest event at Pride Month, the Bear Garden. Beefy, bearded, babes.

Over 150 shows and over 30 venues, and more than 1100 performers, the Fringe Fest is dance, arts, buskers, performers, and much more. Take a long weekend stroll down to Fringe Fest!

Where: Various venues
When: On now until July 10

Christmas for ribs lovers! The 16th annual Ribfest is set to take the stage, and Rotary Etobicoke invites you to join. The event offers a KidzZone, two stages, and lots of ribs.

Where: Church Street and Bloor Street
When: July 3, 2 pm

Where: Any of Ontario’s campgrounds
When: Whenever you are able to!