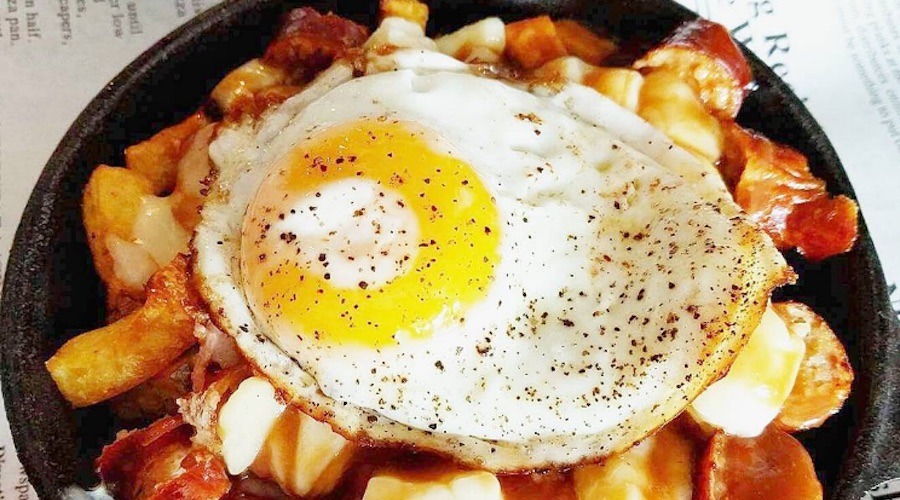 Poutine may be the ultimate Canadian bar food, but if you serve it up in the morning and put an egg (or more) on it, you’ve got the makings for a breakfast of champions. Why not make brunch even more epic?

You’ll find Utopia’s traditional Breakfast Poutine dish on their brunch menu, featuring fries loaded with a duo of poached eggs and cheese curds smothered in their house-made country gravy. For a twist, they also make what they call Oyako Poutine, which is all of the Breakfast Poutine components plus a helping of their Chicken Karaage–it’s serious stuff!

Get ready to kick start your meal with Hunter’s Landing’s Breakfast Poutine. Served on their brunch menu, this dish uses as roast potatoes base, loaded with bacon, Thornloe cheese curds, and not just gravy, but gravy and Hollandaise. Save room for one of their outrageous Caesars!

Breakfast Poutine at Kitchen on 6th

This cozy Brit-centric spot in New Toronto is known for their hearty brunch dishes, including a bang-up breakfast poutine. And you can even go the full British route and load your skillet of fries up with baked beans, too.

Breakfast Poutine at Over Easy

At this egg-centric restaurant, with two locations, they’re putting an egg on it–it being poutine, that is. Building on home fries, their Breakfast Poutine is topped with squeaky cheese curds, bacon, off-the-bone baked ham, poached eggs and Hollandaise sauce.