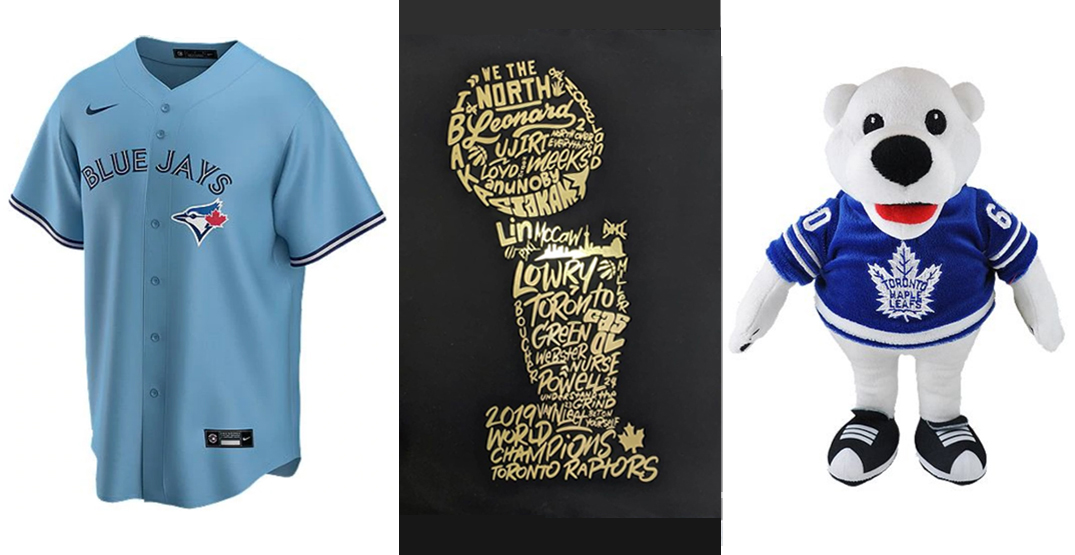 The chapter miraculously closed on the 2020 NHL, NBA, and MLB seasons and the Toronto Maple Leafs, Raptors, and Blue Jays all somehow finished the year mostly unscathed. Two out of three teams made the playoffs, but there’s plenty of room for improvement this coming season.

Sports fans are a devoted bunch, and they’re often ravenous for merchandise for their favourite team. In some ways, it makes them easy to buy for because gifting any team-branded merchandise is usually a winner.

But we want you to take it one step further this year and maybe go outside the outright obvious gifts and dig a little deeper when shopping for your Toronto sports fan. This is your 2020 holiday gift guide for Raptors, Leafs, and Blue Jays fans.

An Original Classic. This is our #NEWBLUE! pic.twitter.com/kei1lFHm6W

If the Toronto sports fan on your list is looking for some new threads from Santa, there are no shortage of options when it comes to new team jerseys.

The Blue Jays released their new/retro powder blue uniforms earlier this year (available in many places, like Sport Chek).

The Toronto Raptors also have a slightly different kit for the 2020-21 season, besides the recently revealed ‘City Edition’ jersey.

Although if you really want to go off the board, one of these offshoot ‘Miami Raptors’ jerseys might be more your speed.

Although they weren’t met with much critical acclaim, the Maple Leafs’ new Reverse Retro jersey had people buzzing on social media. Santa might not be delivering many of these jerseys this year, but surely there are a few who would love to wear them.

The @MapleLeafs @adidashockey #ReverseRetro jersey is available for pre-order online!

It’s hard to believe the Raptors’ championship run happened 18 months ago, but you can cherish that run every day and wrap up one of these prints from Toronto artist Mark Serrano.

Just like all the players’ names attached to the championship banner hanging above Scotiabank Arena, you’ll find every Raptors name from the 2019 championship run inside the Larry O’Brien Trophy.

Fret not Jays and Leafs fans, Mark has you covered with some Blue Jays and Leafs prints there. Or if the fan you’re buying for loves all teams, there are prints of the Bulls, Lakers, Lightning, and Liverpool FC.

It’s an unfortunate side effect of the time we’re living in, but since everybody has to wear face masks these days, why not rep your favourite team?

There are tons of places to find team-branded Raptors, Leafs and Blue Jays face masks.

Toronto-based designer Nadia Lloyd is also selling Toronto Black Lives Matter face masks that the Raptors used while in the NBA bubble earlier this year. Five dollars from the sale of each mask will benefit Black Lives Matter Toronto.

Fred VanVleet bet on himself, and that bet parlayed him into the Raptors’ newest $85 million man with a four-year contract extension. No matter what happens from hereon out, he’ll be laughing to the bank.

You can wear an ode to the Raptors’ point guard with this “Bet On Yourself” T-Shirt from Breaking T. You’ll also find more Toronto-inspired shirts featuring Blue Jays youngsters Bo Bichette, Vladimir Guerrero Jr., and even Alejandro Kirk.

The @Raptors win the #NBA title a year ago, today you can pre-order We the North: 25 Years of the Toronto Raptors, coming Oct with my friends @PenguinCanada with a foreword from @mrvincecarter15.

Staying in isolation means a lot of downtime for many, and there’s no better way to unwind and unplug that settling down with a good book. There are a bunch of books available just in time for Christmas.

Veteran Raptors reporter Doug Smith penned “We The North: 25 Years of the Toronto Raptors“, which would surely make a great stocking stuffer. Smith’s book goes deep into the quarter-century history of the franchise.

For the Leafs fan on your list, you could pick up Rick Vaive’s “Catch 22: My Battles, In Hockey and Life” that chronicles the former Leafs captain’s battle with mental health over his 13-year career. Former Leafs GM Brian Burke also has a new book out, titled “Burke’s Law: A Life in Hockey.”

Snagging a foul ball at a Blue Jays game is one of the rarest feats for a fan, and with no fans in the stands in 2020, there were tons of foul balls, but no fans to chase them down.

Luckily, the Blue Jays rounded up a bunch of game-used baseballs from their 2020 season at Sahlen Field in Buffalo and put them up for auction. Starting from about $60 CAD, you can buy a game-used baseball and wrap it up for your beloved Blue Jays fan.

Or if you really want to go off the board and get a unique gift, for $32.99 CAD, you can gift someone a bottle of infield dirt from the Blue Jays home field in Buffalo this past season. I guarantee nobody else will buy them this.

People love mascots for many reasons, probably because they’re the most accessible and easily recognized representative of the team at rink, court, or ballpark. Toronto’s mascots are some of the most lovable and goofy characters in pro sports.

You really can’t go wrong with a stuffed Carlton bear, or the Blue Jays beloved mascot Ace, or The Raptor. Heck, if you really want to go over the top, buy all three stuffed animals for someone so they can create a Toronto mascot battle royal.