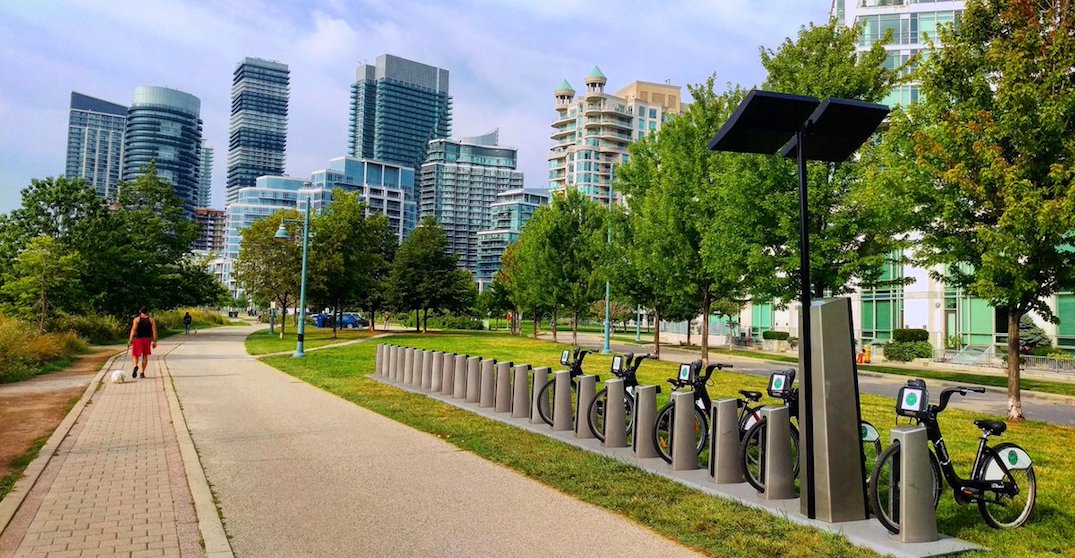 Bike Share Toronto has announced a program expansion that will bring more bikes to more neighbourhoods.

The announcement was made today by Toronto Mayor John Tory who was joined by Councillor Pasternak, Chair of the Infrastructure and Environment Committee, Councillor Bradford and Toronto Parking Authority (TPA) Acting President Robin Oliphant.

This program expansion means that the Bike Share Toronto system will be growing to a total of 6,850 bikes, 625 stations, and 12,000 docking points.

This also will grow system coverage by 100%, covering 200 square kilometres of the City of Toronto.

Two satellite Bike Share pilot areas will be included in the expansion this year. One will be in North York and the other in Scarborough. Both will have up to eight new stations in each area.

TPA will be monitoring the stations to assess their use and performance. They will be doing this over a determined period of time to ensure that the stations are serving residents as best as possible.

Another feature of this year’s expansion will also be launching later this summer. The e-bike pilot program will include 300 pedal assist e-bikes. It also will include 10 e-bike charging stations.

There will be no additional cost to use e-bikes. More details on the e-bike pilot program are expected to be announced in the near future.

New Bike Share Toronto locations are designed to act as an extension of the public transit system. It aims to connect Toronto residents and visitors to TTC subway stations and stops.

It is also in line with Toronto’s ActiveTO initiative. This initiative has allowed for people to get around the city during the pandemic, while following social distancing measures.

The Bike Share Toronto stations are said to be placed “strategically” along ActiveTO routes.

“This announcement is most welcome during a time where residents are looking for different transit methods to get around the city,” Mayor Tory said. “The expansion of Bike Share ensures that people in all corners of the city have access to different modes of transit and are able to take advantage of programs like ActiveTO. I am committed to expanding this program so that residents and visitors continue to have a clean, green and convenient way to get around our city,”

Bike Share Toronto has said that they have ramped up their cleaning program during COVID-19.

They also continue to strongly recommend that riders use the outlined steps in the City of Toronto’s COVID-19 Health Advisory when using the system.