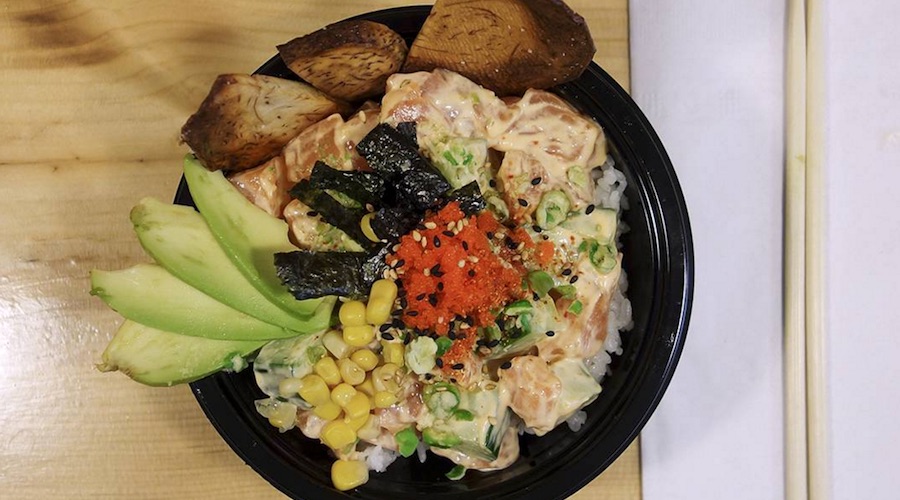 What’s poké, you ask? It’s one of North America’s hottest food trends, and it’s all about the Hawaiian-style raw fish with a variety of sauces and toppings. Gleaming cubes of super-fresh fish are marinated and topped with garnishes like scallion, seaweed, sesame seeds, and beyond. Poké, which basically translates to “chunk,” can be made with all sorts of bases, however in recent years its become synonymous with a cold, fresh, vibrant fish salad…on vacation.

A growing trend in North America in the last year or so, all-poké spots have opened up in New York, Los Angeles, Montreal, and Vancouver, and now with Big Tuna Poké Bar, Toronto is on the list. They have a “build your own bowl” option that lets you put together the perfect poké.

Check out some of their eye-catching poké creations:

On a poké roll… #thisiswhyimfat

Did you hear? The next big thing in toronto is poke! Think sushi but in rice bowl form. Easy to eat and yummy toppings. At the soft opening of @bigtunapokebar. the lighting was quickly disappearing on me…the sun waits for no one 😂 #torontoeats #toronto #blogto #getinmybelly #foodporn #vscofood #vscocam #thatsdarling #flatlay #getinmybelly #igerstoronto #foodie #food #food #poke #hawaiian #sushi #sushitime

Could our lunch look any better? #toronto #poke #foodie

Now open! The first Poke Bar in Toronto! Ordered the signatures dishes The Big Katuna, The Ninja and El Guapo All three dishes had a refreshing taste each with its own unique flavour. All the ingredients mixed well with the fresh tuna and salmon. Will post more this week! Stay tuned! Thank you @bigtunapokebar for the invite and congratulations on the soft opening! #torontofood

Feeling creative? Build you own bowl with our fresh toppings to satisfy your cravings. We are open at 12 pm today! Catch yourself a bowl! 599 Bloor St West, Toronto, ON.