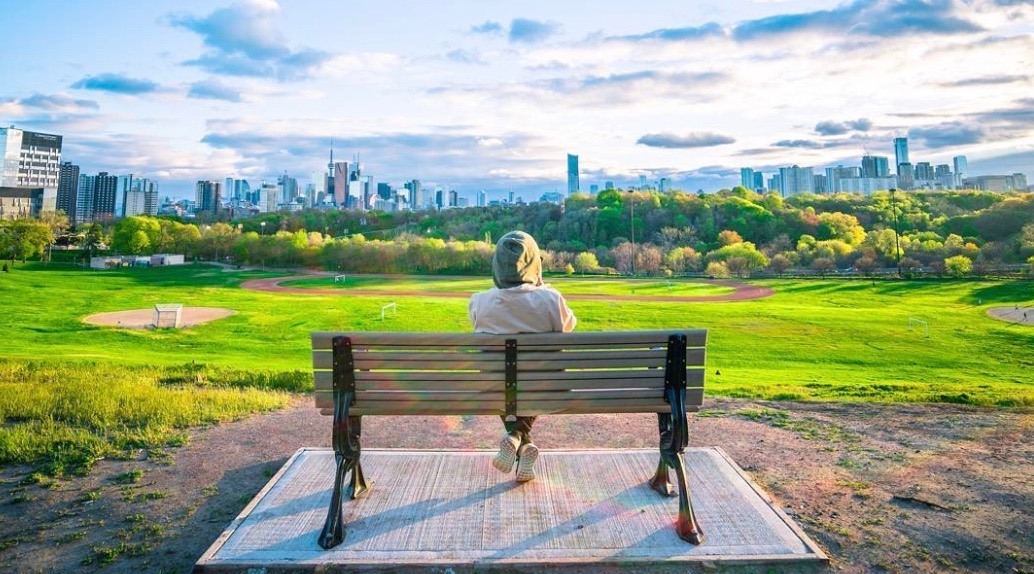 By this time next year (give or take a week), weed will likely be legal in Canada.

And Toronto has already stepped into that reality with thanks to dispensaries becoming “a thing” in the city last year. In fact, the only thing better than having copious amounts of weed to choose from is the fact that there’s also no shortage of perfect backdrops to accompany your high.

Helping your Sunday Funday cause, here are the nine best places to smoke weed in Toronto this summer.

Just remember, don’t smoke around kids, and don’t be a dick about it if someone asks you to move on down the (public park) line.

One of my fav spots in Toronto! Leave it to me to scope out beaches in Canada lol. This is Canada’s Sugar Beach–a really sweet escape! Once it was nothing more than a derelict parking lot, but in 2010 this area was converted into a playful, beachy public space. Though you can’t swim here (you really wouldn’t want to), it’s great to see unused spaces be given a breath of new life and purpose! #canada #lovelife #latergram #summer #escape #landscape #beach #beauty #bluesky #outdoors #fun #instamood #photography #photographyislifee #pursuitofhappiness #travel #cottoncandy

Filled with lake-facing Muskoka chairs, Sugar Beach is one of the best places to get stoned and calm yourself – as long as you do so in the evening. During the day, there are too many kids around (blame the splash pad).

This one isn’t a shocker; what else do you even do in Trinity Bellwoods other than get stoned? With its hippies, hipsters, and Queen west characters, nobody will care that you’re smoking weed. They just may ask you to share.

Happy Fathers day to all of the fathers out there!

With its unmatched west-facing views of the city in all of its skyscraper-filled glory, Riverdale Park is close enough to the downtown core to be convenient, but just far enough removed not to feel consumed by the hustle. Rather, you can imagine what everyone is doing from afar.

this is me after i found out you can still get sun burns through clouds :/

Brining a little greenery along for a beach day is almost as essential as booze or snacks. A beach blanket, chill music, good company and lake views are pretty much the perfect ingredients to get a little stoned – even for the “only sometimes” smokers.

It’s another #potio day at Hotbox. Stop by for a toke and soak up the rays. Open until 11pm tonight with Big Spliff Reggae starting at 7pm. #hotbox #hotboxcafe #potioseason #patioseason #smokeweedeveryday #420friendly #710society #cloudsovercanada #sunnyday

Kensington Market is pretty much defined by its perpetual weed smell, so you’ll be in good company with all the neighbourhood stoners. If you want to be social, you can smoke on the patio of the infamous Hot Box Café; if not, there’s also a park, if you can score precious real estate to sit and take in the weed smoke as well as the people.

High Park is big enough that you’ll find a spot free of children even on the sunniest of Sundays. It’s also filled with things to explore once stoned, like a zoo, nature trails, a lake and – perhaps most importantly – ice cream trucks.

If you’re craving more of a chill, scenic vibe, Scarborough Bluffs could make you forget that you’re so close to home (the weed may play a role too). After you’re finished your view-filled smoke session, the area offers all you need for an ultimate stoned adventure: a beach, hiking trails and restaurants. Just make sure to stay away from the edge.

The House of Yoga

LA YOGA Magazine: “As more yoga teachers and studios across the United States and worldwide pair the practice with the cannabis plant, they’re actually participating in a reunion, not a passing fad. The use of this plant in tandem with yoga is nothing new. Cannabis has been revered as sacred in India for millennia, and it forms the roots of yogic history. The links between the two are ancient.” #layogamagazine #ganjayoga #cannabisenhancedyoga #youcouldjustcallitYOGA

For many, the only thing better than yoga is stoned yoga. But you don’t have to be paranoid that you’re the only red-eyed one in your yoga class; not at the House of Yoga. Here, you can bring your own weed and partake in a ganja-guided yoga class.

While this spot is a bit riskier in terms of being asked not so nicely to dispose of your perfectly rolled joint, the grass, trees and history rich architecture make U of T a prime breeding grounds for indulging in a little summertime smoke session.

Naturally, we’d suggest the Toronto Island, but, you know… (and no, we’re still not over it).