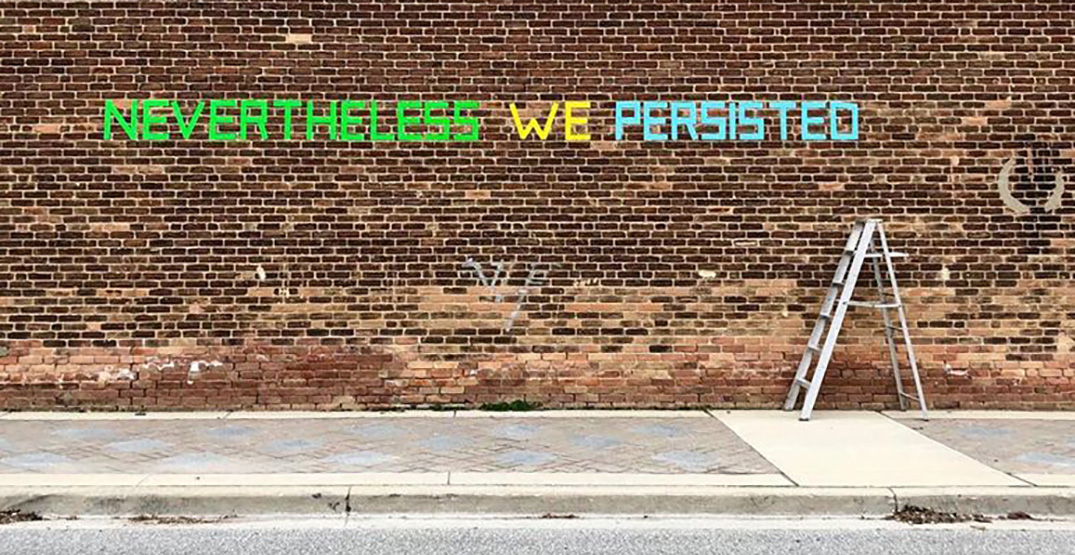 Health and safety messages have become a common part of daily living in Toronto, but while they might help keep us healthy, messages about washing your hands don’t usually inspire hope.

Ontario artist Mark Reinhart decided to change that when he began leaving messages written in neon coloured tape throughout his hometown of Chatham, Ontario.

“A friend of mine in public health and I got together and we were thinking about different ways that we could encourage people to stay apart from each other, but find interesting ways to come together,” he told Daily Hive.

He began by leaving the messages in cultural spaces around Chatham-Kent. Admittedly a former “duct tape graffiti artist,” when the local library approached him wanting the message “books bind us together,” emblazoned across a building, Reinhart changed his approach.

“When that conversation happened and I put up that message, I thought, ‘ah, this is the real project,” he said. “It shifted to me having conversations with groups, institutions, individual residents, and then distilling those conversations down into a sole message.”

The project developed further, with an Instagram account being set up, and an increasing amount of buildings wearing bright phrases like “we’re in this together,” “now is the time to do things differently,” “we are the stories and the storytellers,” and more. In total 65 different messages were left across the county.

That’s when Summerworks reached out.

The longstanding Toronto art festival was developing ways to celebrate its 30th year during the pandemic and wanted to bring the Health and Safety Notes to Toronto.

A post shared by HEALTHandSAFETY (@healthandsafetysocial) on Aug 27, 2020 at 6:00am PDT

Put up through the month of August in Parkdale and Queen West, the works were created in collaboration with organizations and residents in the Parkdale community, meant as a way of “staying connected during a time when connecting with one another can seem strange and fleeting.”

“It became a way of documenting what people were thinking, their hopes, fears, anxieties, all this stuff, during this pandemic,” Reinhart added. “And, realistically using the messages as the way to show how art can help us make sense of things in general, but particularly right now.”

A post shared by HEALTHandSAFETY (@healthandsafetysocial) on Aug 13, 2020 at 5:00am PDT

If you’re interested in checking out some of the wise words for yourself, a map has been created showcasing the official installations made as part of the Summerworks program. Summerworks ends in September, but Reinhart says the messages will remain if businesses and homeowners choose to keep them up.