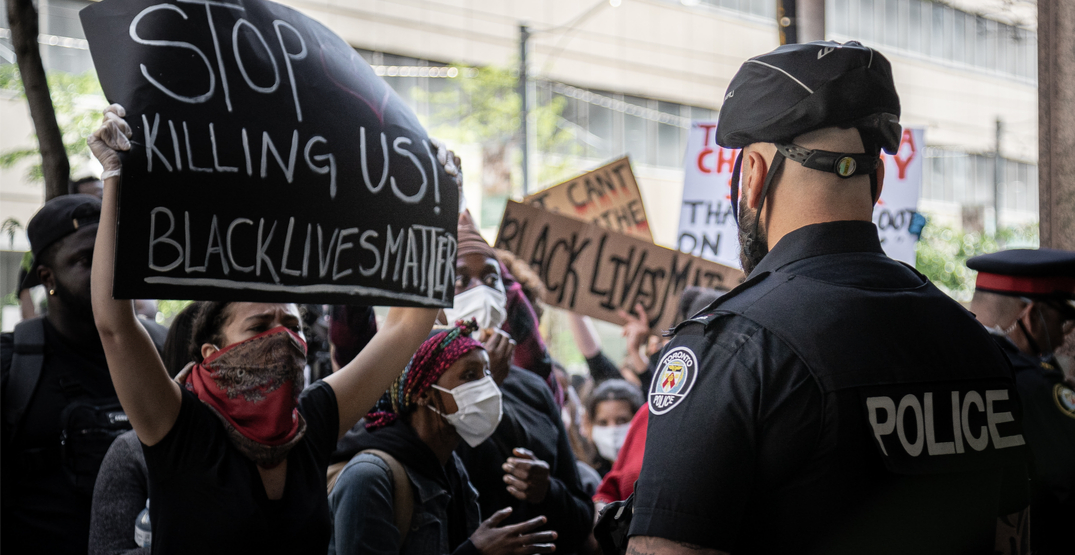 "Not another black life" protest in Toronto on May 30. (Shutterstock)

The Toronto Board of Health has declared anti-Black racism a public health crisis.

On Monday, the board unanimously voted to recognize the health crisis here in the city.

“Toronto is the most diverse city in the world. At the same time, anti-Black racism is a historic, pervasive, and systemic issue in our city,” read a letter from Councillor Joe Cressy, Toronto Board of Health chair.

“Racism has numerous consequences: Black Toronto residents are more than twice as likely to be living in low-income households than residents who are not a visible minority, and 44% of Black children live in poverty, compared to 15% of non-racialized children. Black women in Ontario earn 57 cents for every dollar that a non-racialized man earns.”

Cressy also said that “Black people in our city experience racial profiling and anti-Black discrimination within our institutions, along with higher rates of precarious employment and unemployment, significant poverty, and overrepresentation in the criminal justice, mental health, and child welfare systems.”

Additionally, race, income, housing and other social determinants of health have impacted Black communities in Toronto, as seen through the disproportionate impact of COVID-19 on communities with higher percentages of visible minorities.

“This is tragic, it is unacceptable, and it needs to change. In order to adequately address anti-Black racism in our city, we must approach it from a public health perspective,” said Cressy.

In its declaration, the Board of Health will be looking at recommendations from the Medical Officer of Health, through the 2021 Budget process and COVID-19 recovery planning, on re-prioritizing City of Toronto resources to address the social determinants of health, including specifically a focus on anti-Black racism.

“Anti-Black racism and anti-Indigenous racism exist, and other forms of racism as well, they exist in our city and in our country,” said Mayor John Tory on Monday.

“We are committed to confronting them, and to ultimately ending all forms of racism.”

Tory said he supported the Board of Health’s direction through the budget process to make recommendations to address a focus on anti-Black racism.

“Our communities are grieving. This moment is unprecedented, yet in many ways, we have been here before,” reads a joint statement issued by the Black Health Committee, the Black Health Alliance, and the Network for Advancement of Black Communities (NABC).

“Black people have long talked about disproportionate violence our people face as a result of policing. We have followed closely the horrendous killing of George Floyd in Minnesota, and more recently the death of Regis Korchinski-Paquet in the presence of police officers in Toronto,” the statement continued.

The Black leaders said that Regis joins a long list of Black people who have died in police presence after wellness calls were made for help.

“We have not forgotten what happened to D’Andre Campbell in Brampton, Abdirahman Abdi in Ottawa, and Andrew Loku in Toronto. Thousands have been spent on inquests, recommendations have been made, and yet still, Black people seeking help face harm. We cannot be silent in the face of the ongoing horror Black people are experiencing in Ontario, across Canada and in the United States. We stand in solidarity with Black people everywhere in calling for justice.”

In 2018, the Canadian Public Health Association released a position statement acknowledging that racism is a public health issue.

“Ontario, like other provinces and territories in Canada, is a place that struggles to contend with the harms of white supremacy and where legacies of colonization, slavery, structural inequality and systemic discrimination deeply impact the lives of Black people,” said the leaders, who urged allies to make commitments to address iterations of white supremacy and anti-Black racism by standing in solidarity with Black people.

The Black leaders’ call for action aims to address racism in several ways, one of which is the declaration of anti-Black racism as a public health crisis.