In an Angus Reid Poll, it was revealed that 45% of Millennials living in Toronto are seriously considering leaving the GTA.

The only thing surprising about this info is that the poll didn’t directly start out looking for this information. Instead, Angus Reid was trying to gauge what Torontonians’ reaction would be if a BC-style foreign buyers tax was introduced to the city or province.

And the answer is that people living in the GTA overwhelmingly love the idea, with 77% either moderately or strongly supporting the motion: 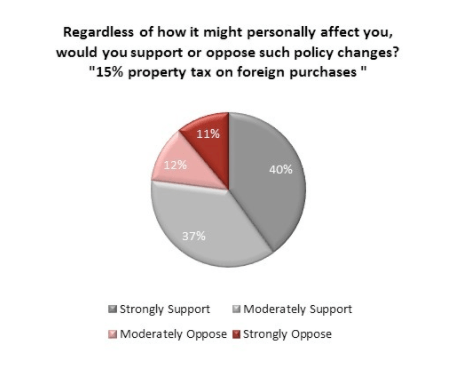 But let’s get to another important piece of information that came out of Angus Reid’s questions, namely, that nearly one in two Millennials living in Toronto are strongly considering GTFO.

Which isn’t much of a surprise considering that year-over-year, Toronto’s housing prices are jumping more than 20%.

Which is also why, at the end of the day, almost the exact same number of people don’t really care if a foreign buyers tax is introduced or not. ‘Cause everyone who doesn’t already own a house at this point is just kind of like, meh, I’m f*cked either way:

So to sum up, most people surveyed in Toronto would be down with a foreign buyers tax while most Millennials living in Toronto are trying not to break down crying every time the prospect of buying a house is brought up.

On that note, here are all the places near Toronto you can buy a house on a condo budget.