The father of a two-year-old child abducted early Thursday has turned himself over to police, and three others were arrested in connection to the investigation.

According to Brantford Police, the child, who was the subject of this morning’s Amber Alert, was located safely.

According to police, just after 12:00 am on July 25, they responded to a 9-1-1 call about an abduction and assault at an address on Bissett Avenue in Brantford.

Police say the suspect then “grabbed the two-year-old child and fled the residence in a vehicle with three other people.”

Through investigation, police say it was believed that the suspects may have gone to the Hamilton area and possibly to a residence in Hamilton. That’s when the Hamilton Police Service was contacted and assisted in the investigation. The residence was checked for the suspect and child just before 1:00 am, however they were not located. 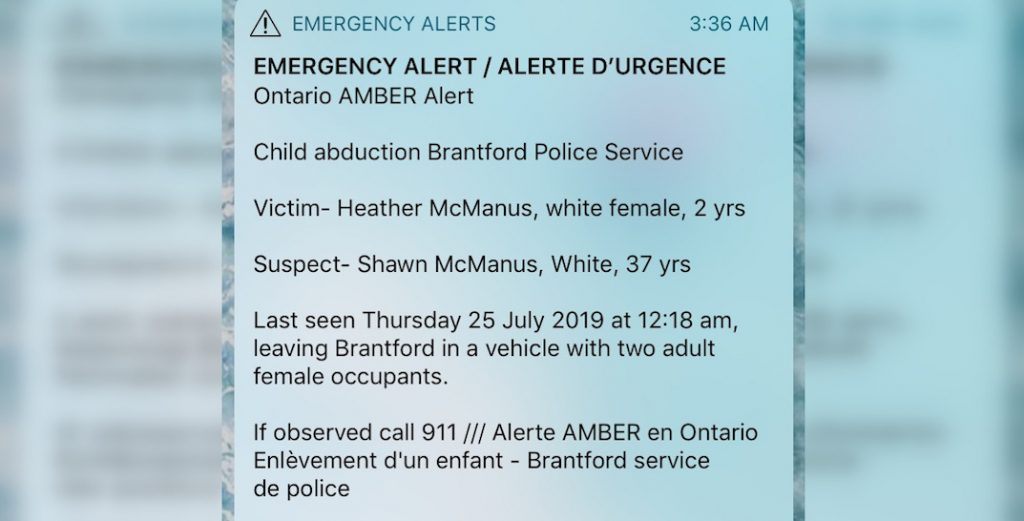 The Brantford Police say they were able to identify and made contact with the suspect “however he refused to disclose his location or return the child. As a result of the investigation, an Amber Alert was issued.”

Just after 2 am, the Hamilton Police Service was able to locate the suspect vehicle being operated in Hamilton by three individuals that are believed to be involved in this investigation.

The three were arrested and are currently in custody, according to Brantford Police. The child was not located at that time.

At approximately 3 am, police say the suspect was located at an address on Upper Ottawa Street in Hamilton.

The Hamilton Police Service say they were able to make contact with the suspect and just before 4 am, the suspect turned himself over to police and the child was located safely.

The Brantford Police Service continues to investigate this incident and the circumstances surrounding the four parties that were involved.