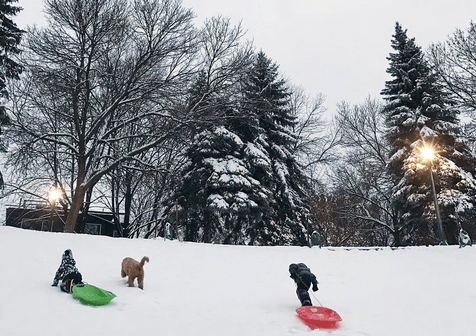 The snow has fallen, and the weather is dipping below zero. But we’re Torontonians, and this has never stopped us!

So let’s bundle up, and check out what’s going on in the 6ix this cold Tuesday.

Toronto’s financial district will be host to a pop-up skating rink as part of the Usful Holiday Market, and the fun begins today! Along with a two day market, Usful will feature the public skating rink and a holiday tree centered in Arnell Plaza.

Trivia Night At The Lockhart

Snow on the ground and book in hand. Perfect time to read up on your Fantastic Beasts knowledge for Trivia Night. Questions will based on the book/awesome new movie! Get there early.

An evening with Paul Shaffer

For 33 years, Thunder Bay, Ontario native and University of Toronto-educated Paul Shaffer served as David Letterman’s musical director and sidekick. Shaffer began his career in 1972 as musical director of the Toronto production of “Godspell.” He played piano in “The Magic Show” on Broadway in 1974, before spending the next five years with the original “Saturday Night Live,” where he played keyboards, composed special musical material and, in 1980, became a featured performer. Tonight, he hosts the UJA Centennial Campaign Closing.

Toronto’s dvsn are back home after their massive Summer Sixteen tour with Drake. On OVO’s label, dvsn released a highly successful debut album earlier this year, and this is a good chance to check out dvsn in a more intimate setting.

Award-winning cinematographer Kirsten Johnson has filmed warzones, street scapes, and more. Her work includes Fahrenheit 9/11 and Citizenfour. For her latest, Cameraperson, she reaches back into her vast trove of footage to reveal a vivid memoir told through astounding vignettes in this Hot Docs and Sundance favourite. Johnson will be in attendance for a Q&A following the preview sceening tonight.