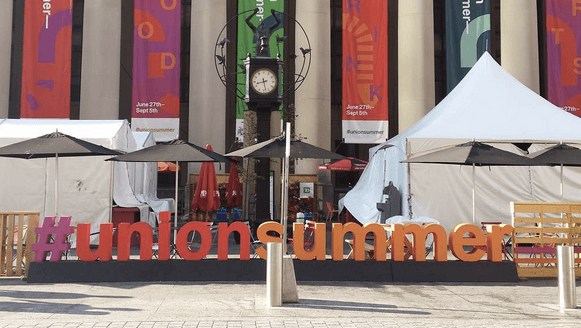 Can you believe there are only two weeks left in August?

Summer is flying by. Make sure to take advantage of all the awesome events around the city this month, and make the most out of August.

Here are some events in Toronto today. And there’s a dance class you may want to check out.

And pack that umbrella!

Play the Parks
Listen to the fusion of the Americas for free this afternoon. Play the Parks is featuring Mexico Amigo Mariachi Band with Amin Llaven Peon today.

City Cinema
The weekly City Cinema event takes place tonight, with a screening of There’s Something about Mary. #TBT on a Tuesday.

Sunset Yoga
Add a little zen to your Tuesday. Join the Flying Yogi this evening for their by donation sunset yoga class.

Where: Kew Gardens Bandstand at Lee Avenue and Queen Street East
When: August 16 at 7 – 8 pm

Dance class at Union Station
The Underground Dance Centre hosts a Tuesday night class at Union Summer – and tonight is a Justin Bieber Dance lesson. You know you want to…