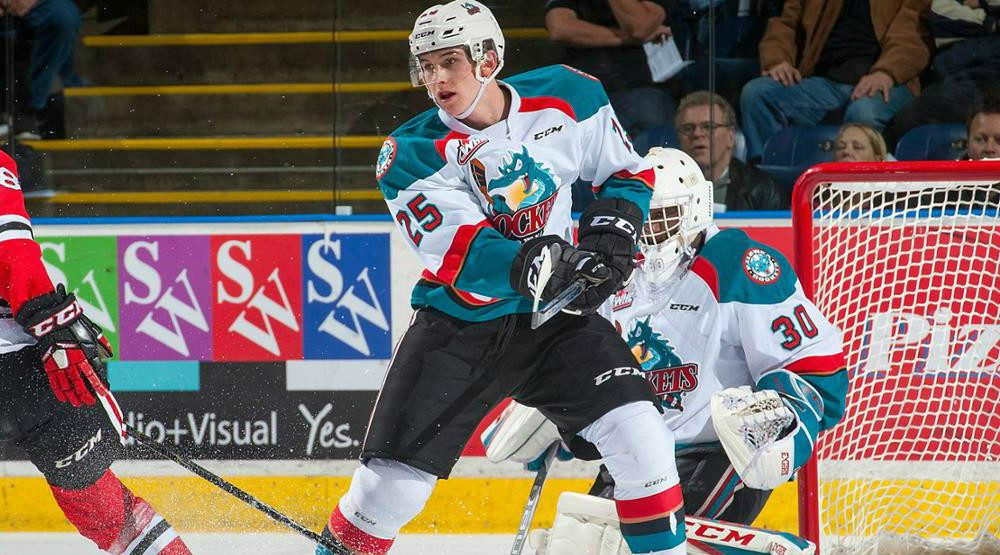 Toronto won’t draft another Auston Matthews this year, but that’s not to say they won’t be selecting a talented skater at the NHL Draft in Chicago on June 23rd.

A number of successful NHL players have been chosen from this position, and a number of promising defencemen should be available when Toronto takes the podium.

And while there will certainly be intriguing forwards available, it’s important to remember that Memorial Cup superstar Jeremy Bracco – a Leafs draft pick in 2015 – is unlikely to crack the 2017-18 roster.

Instead, Toronto needs more quality defenders on the depth chart to go alongside Andrew Nielsen and Travis Dermott. Here are three skaters to help them get there.

Callan Foote, the son of two-time Stanley Cup champion Adam Foote, is one of the top defencemen eligible for the 2017 Draft. Commended for logging big minutes, Foote uses his 6-foot-3 frame and long reach to effectively shutdown his opponents.

Foote is also a right-handed shot, an asset Toronto so desperately needs. The Leafs have six defencemen signed for next season (Morgan Rielly, Jake Gardiner, Nikita Zaitsev, Connor Carrick, Martin Marincin, and Alexey Marchenko) which makes for an even split of right and left-handed shots.

But the problem lies in Toronto’s prospect pool, Neilsen and Demott both being lefties. Should Toronto select Foote, the 14th ranked player by TSN’s Craig Button, they’ll be landing an excellent passer with ample physical upside.

Next season, expect Foote to suit up for team Canada at the World Junior Championships, and don’t fret over his low goal scoring totals. It’s no secret Toronto needs a shutdown defenceman, and if his development goes according to plan he could fill that void in the years to come.

Juuso Valimaki has become the Tri-City Americans most important defender, posting 61 points in 60 games this past season. Of all other CHL defencemen eligible for the 2017 Draft, Valimaki was the only one to finish with over a point-per-game.

Compared to other top CHL defencemen drafted in the past two years (i.e. Ivan Provorov, Olli Juolevi, Mikhail Sergachev, Jakob Chychrun and Thomas Chabot) only Provorov was able to meet this elite standard.

He likely met this mark given his incredibly balanced attack.

As an 18-year-old at the World Junior Championships this past winter, Valimaki notched two goals alongside older NHL-drafted Finnish defencemen in Vili Saarijärvi and Olli Juolevi.

Ranked 17th on TSN’s rankings, expect Valimaki to go somewhere in the middle of round one, potentially as an option for the blue and white. Although he is a left-shot and needs to work on the power and accuracy of his release, he would still be a solid addition to Toronto’s prospect pool.

The first thing you should know about Nicolas Hague is that he’s absolutely massive. Said to barely give his opponents room to breathe in front of the net, the 6-foot-6, 210-pound Hague is a surprisingly fluid skater given his size. Regarded as one of the best defencemen in the OHL, Hague enters the draft as a dependable two-way player who isn’t afraid to shoot the puck.

Personally comparing his playing style to that of Oliver Ekman-Larsson, Hague fires the puck on net more than three times a game. Leading all Steelhead defencemen in goals and points (18 G, 28 A) this past season, Hague is a force to be reckoned with. He also registered six power play goals, ranking him second on the team behind forward Owen Tippet’s 12.

Offence aside, however, the fact Hague tallied 107 penalty minutes for the fifth-highest total in the OHL speaks volumes.

Although he’s a great open ice skater, Hague (the 20th-ranked North American skater by NHL Central Scouting) needs to work at keeping pace with the smaller, niftier players that are becoming so dangerous in today’s NHL. Still, Toronto should consider selecting him if he’s available at number 17, as the Leafs could acquire a serious defensive threat.