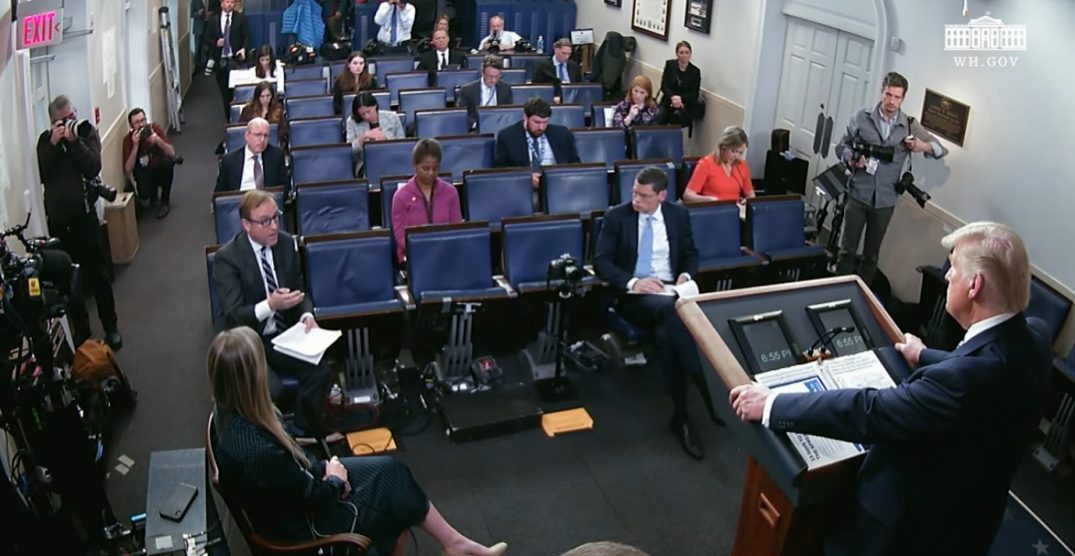 President Donald Trump told the nation there is a need to better protect Asian Americans within the United States, and in foreign countries.

During an update by the Coronavirus Task Force, the president kicked-off his introduction by bucking some recent trends. Trump called the coronavirus pandemic “the virus” rather than his usual pattern of designating it the “Chinese virus.”

He also added we need to “totally protect our Asian American communities in the United States, and all over the world.”

“The spread of the virus is NOT their fault in any way shape or form.”

The president also gave an update on Americans abroad, trying to get home since the strict travel bans handed down by the government in accordance with instructions from the CDC, but provided very little information.

We know that 103 American citizens were successfully brought home from Brazil, after finding themselves stranded after a cruise’s emergency docking. Trump praised the help of the Brazilian president.

“Most of those returned were seniors,” he added.

According to the president, the government’s attempts to shut down certain companies and websites continue. Many have been maliciously attacking American citizens with false claims, unjust price-hikes, and even a fake virus cure.

Information on health services and medical supplies provided by the president indicate that FEMA is distributing over 8,000,000 respirator masks, and 13 million surgical masks around the country as needed. “Focusing on the areas with the greatest need,” Trump said.

Reportedly included are 73 pallets of personal protective equipment that have been sent to New York City, one of the hardest-hit areas in the world, and 36 pallets to Washington State.

“In the past 96 hours, FEMA has also received donations of approximately 6.5 million masks,” added Trump.

This morning, New York Governor Andrew Cuomo had some stern words for the president, and the federal government, in regards to their reaction to medical needs in the hardest-hit areas. Cuomo demanded drastic federal government action, calling New York the “canary in the coal mine … we have the highest and fastest rate of infection.”