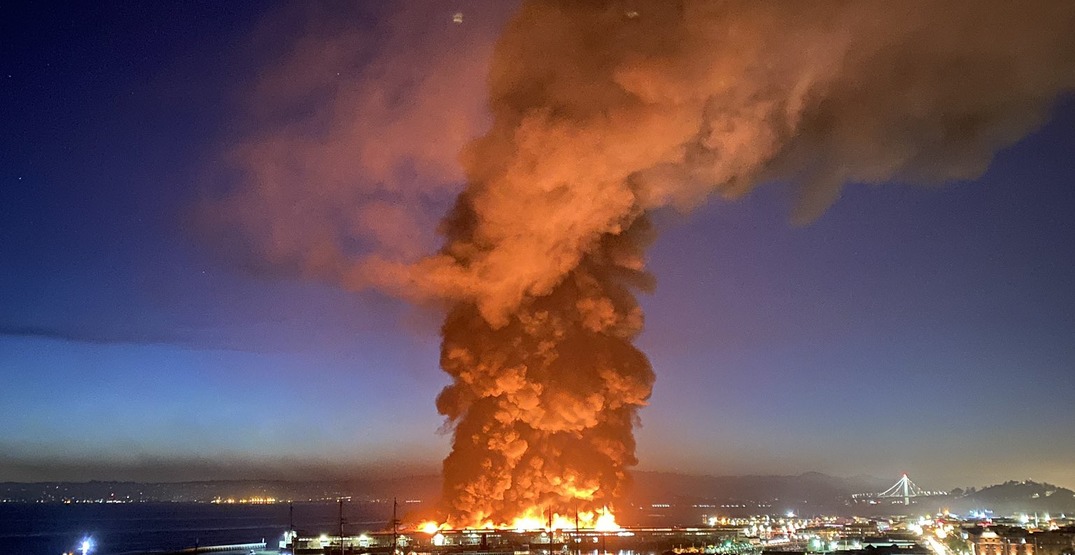 A quarter of San Francisco’s iconic and historical Fisherman’s Wharf was destroyed by a massive fire on Saturday that has since been contained.

The San Francisco Fire Department responded to a four-alarm fire at the historic Pier 45 early Saturday morning, the Port of San Francisco said on Twitter.

Thankfully, no injuries or loss of life have been reported.

Early this morning #SFFD responded to a 4 alarm fire at Pier 45. No injuries or loss of life reported. We are grateful to the brave firefighters and emergency response teams for containing the fire, protecting our waterfront, saving the SS Jeremiah O’Brien. Thank you @SFFDPIO! pic.twitter.com/pa1430lLl1

According to live updates posted to the location-based safety alert app Citizen, 150 firefighters battled the flames and worked to safely contain the fire. Firefighters later discovered that the fire had spread underneath the pier when they were working to combat the flames.

One firefighter was reported as injured but in stable condition.

At 11:29 am PDT, San Francisco Fire Department Public Information Officer Lieutenant Jonathan Baxter stated that the fire had been contained and that firefighters would continue putting water on the remaining blazes into the evening.

At 11:31 am, it was explained that 75 firefighters would remain on the scene to ensure that the fire was entirely extinguished.

Not a picture of San Francisco you ever want to see. Pier 45 pic.twitter.com/7EFWq2Rr3x

San Francisco’s Fisherman’s Wharf is a world-renowned tourist attraction as well as a beloved local neighborhood home to multiple commercial and retail establishments. It is also a significant hub for the city’s historic fishing industry, and many travelers venture there just to see the neighborhood’s “Fish Alley,” where they can see the fisherman work firsthand. It is also a launching point for Bay cruises and charter vessels.

Pier 45, in particular, is known primarily for its historic World War II-era vessels and antique arcade museum. Two vessels are featured at the pier. One is the USS Pampanito, which is a diesel-electric powered submarine that serves as a museum as well as a memorial to honor those who served in the “silent service.”

The second ship is named the SS Jeremiah O’Brien, which is one of two remaining fully functional Liberty ships. Forces occupied 2,710 of these vessels that were built and launched during World War II.

San Francisco Pier45 Burning down as we speak pic.twitter.com/oPwpAgtpTD

The SS Jeremiah O’Brien also serves as a museum on the National Register of Historic Places and is a National Historic Landmark.

Luckily, firefighters were able to save both vessels against the devastating blaze.

“Today’s massive fire in San Francisco’s Fisherman’s Wharf did heavy damage to Pier 45 and destroyed a historic warehouse and some of the offices for the iconic Red and White Fleet,” the San Francisco Fire Department explained on Facebook.

“However, as bad as this all was, there was one, especially poignant glimmer of hope. The national historic landmark Liberty Ship Jeremiah O’Brien was saved due to the heroic efforts of the San Francisco Fire Department on-land and also on-the-water via the SF Fireboat Phoenix.”