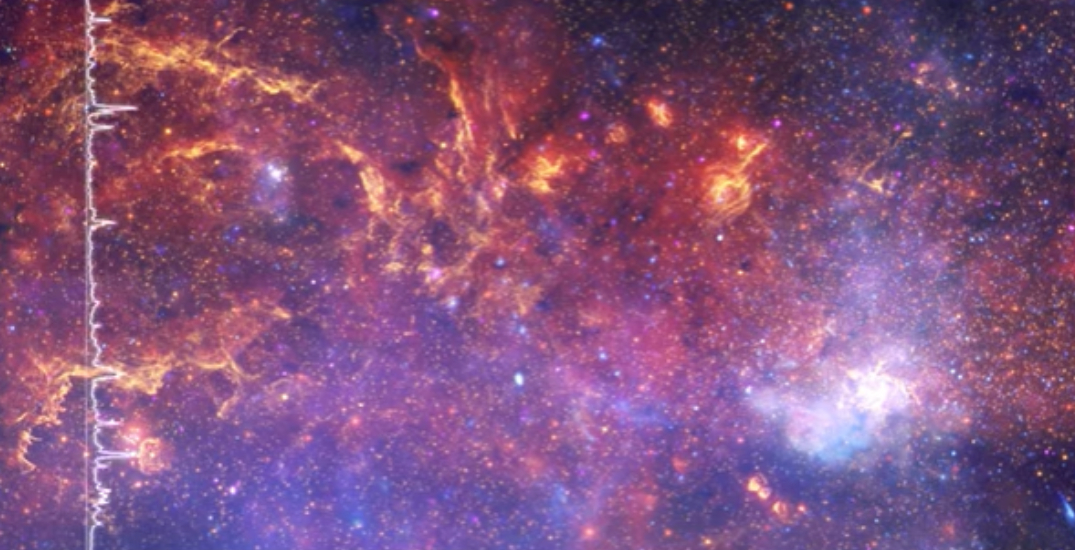 A new project takes celestial photos from three NASA telescopes and turns them into sound, allowing humans to “listen” to the center of the Milky Way, the galaxy that contains Earth’s solar system.

Panning from left to right across the image, the sounds represent the position and brightness of X-ray, optical, and infrared light sources, said NASA.

Objects towards the top of the image are heard as high-pitched sounds, while lower pitches emanate from below. The intensity of an object’s light controls the volume of each sound.

“Stars and compact sources are converted to individual notes while extended clouds of gas and dust produce an evolving drone,” NASA said.

The crescendo of the piece occurs as Sagittarius A*, the supermassive black hole at the center of our galaxy is reached. It appears in the lower right hand of the image, which is approximately 400 light-years across and 26,000 light-years from Earth.

One light-year is the distance that light travels in a year, equal to roughly six trillion miles.

As each telescope captures a different form of light, the data can be listened to as “solos” from each one, or as an ensemble piece, where Chandra, Hubble, and Spitzer all play different instruments, said NASA.

“The Hubble image outlines energetic regions where stars are being born, while Spitzer’s infrared image shows glowing clouds of dust containing complex structures,” they say. “X-rays from Chandra reveal gas heated to millions of degrees from stellar explosions and outflows from Sagittarius A*.”

In addition to the center of the Milky Way galaxy, photos of the remains of a supernova and interstellar gas and the infamous “Pillars of Creation” image were also turned into astronomical tunes.