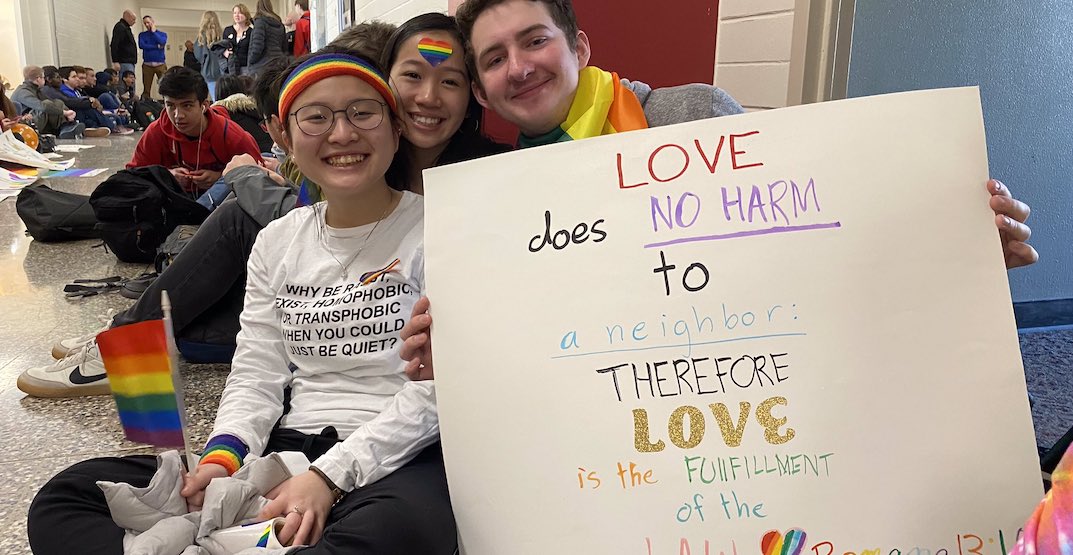 Just 20 minutes out of Seattle in Burien, Washington, students of Kennedy Catholic High School have been taking part in ongoing protests in support of two teachers that resigned last Friday.

In a Facebook post by Kennedy Catholic High School, it was shared that Paul Danforth and Michelle Beattie had “voluntarily resigned their positions.”

However, King County Councilmember Dave Upthegrove posted to Facebook, joining in on the speculation that the two were fired for being gay.

With further speculation brewing over the weekend, students came to school this morning ready for planned protests armed with multicolored posters and pride flags waving.

Students at Kennedy Catholic High School in Burien walk out of class for a sit-in, showing support for two LGBTQ teachers who recently resigned. Critics say the teachers were forced out because they are gay. Students post signs at the entrance. We can also hear them cheering pic.twitter.com/R1MGPQFdFG

Those inside the school have begun the day by hanging up posters and demonstrating support by avoiding classes and taking part in sit-ins.

Students are also planning on staging a walkout at 1 pm, where they will either head home or stay to protest outside of the school.

Picture from inside Kennedy Catholic High School where the students are partaking in a sit-in to protest a couple of their teachers being forced out simply because they are gay an intended to marry their partner #EraseTheHate pic.twitter.com/RNDSfsAr1J

In addition to the students protesting, the Family Policy Institute of Washington (FPIW) will be counter-protesting in front of the school at 1 pm.

“Two teachers at the center of this controversy made choices to abandon the Church’s teachings and resign. The school shouldn’t be punished for that…please pray for the two teachers who resigned, and for the protesters who support them. May God open their hearts and minds to the truth of the Gospel of Jesus Christ,” FPIW says on its website.

While students battle for their teachers, the FPIW will be showing support for Kennedy Catholic High School.