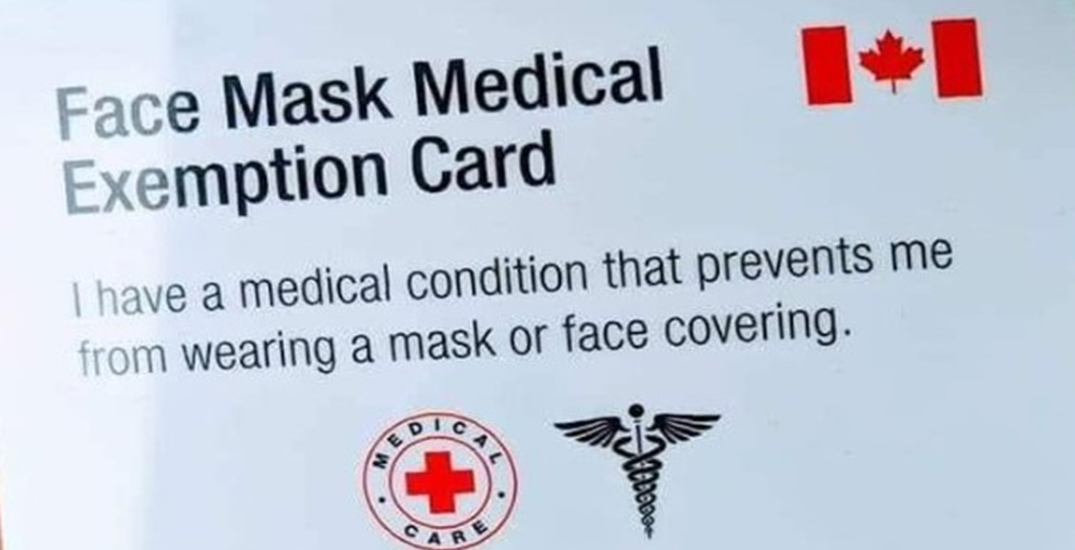 Fake face mask exemption cards are being circulated around Canada as different parts of the country have made wearing a mask mandatory inside all public space.

Each card is printed with a Canadian flag, the Canadian red cross symbol and a medical logo.

“I have a medical condition that prevents me from wearing a mask or face covering,” the card reads.

Municipalities around the province of Ontario have confirmed that these cards are not real or valid.

Toronto Public Health has warned residents of the falsehood of the cards but are also aware that they are being distributed in the city.

We are aware of face mask exemption cards being distributed in TO. Businesses are not permitted to require proof of an exemption if you are unable to wear a mask for medical reasons. These cards are not endorsed or provided by TPH. More info on the bylaw: https://t.co/OdsVc3e5HI pic.twitter.com/qFC88P1aqB

The City of Toronto passed a bylaw on July 7 that requires residents to wear a mask or facial covering inside all enclosed public places.

During Toronto’s July 15 COVID-19 briefing, Mayor John Tory also confirmed that cards are not required to be exempt from wearing a mask.

“These kinds of cards are not required and I would just hope that people would be very wary of purchasing one because it is not needed,” he said.

“And be very careful about who they’re coming from.”

Toronto’s Medical Officer of Health, Dr. Eileen de Villa described the production of these cards as “fraudulent activity,” during the briefing.

“I think any kind of fraudulent activity is always disappointing but I would point out that it is generally perpetrated by a very small number of people in our city,” de Villa said.

Dr. de Villa will be reviewing recommendations regarding masks on a month-to-month basis and will be reporting if any changes are required in the city of Toronto.

On July 2, it also became mandatory in Toronto for customers and Toronto Transit Commission staff to wear a face mask or facial covering while travelling.

However, the TTC has created a real exemption card for passengers to use on transit as a visual identifier. But, customers who cannot wear a mask are not required to carry these cards.

Wellington-Dufferin-Guelph Public Health have also said that the cards are not real. According to the health unit, no proof is required for an exception from wearing a face mask.

“Public Health is not asking for businesses to check or require documentation.”

Ontario Premier, Doug Ford said that the cards are “unacceptable,” during his daily COVID-19 update, on July 15. He also spoke on the Red Cross emblem that is being used on the cards.

“I want to thank the Red Cross, what a great organization. It’s unfortunate that people are using their logos and I understand that they are possibly going to be taking action,” Ford said.

“This isn’t the time to put fraudulent cards to get away and be able to go to a store. Be responsible. Don’t be a scammer.”

Ian Preyra, emergency doctor and Chief of Staff at Joseph Brant Hospital said on Twitter that people have been coming to the hospital with the “bogus” face mask exception cards.

This hasn’t been the only form of protest against facial coverings that the country has seen.

A petition was also started with almost 60,000 signatures asking the Quebec government to reverse its decision to make face masks mandatory in indoor public places.

Masks will be mandatory inside public spaces starting on July 18, in the province of Quebec.

Quebec business owners can also be issued a fine ranging from $400 to $6,000 for not enforcing mask rules.

As of August 1, fines could be issued to individuals in the province who are not abiding by the rules.

There are exemptions when it comes to face masks.

Exemptions are made for those who cannot wear a mask for medical reasons, children under the age of two years old, and other reasonable accommodations.

The coronavirus can spread through contact with respiratory droplets produced by someone who is infected when they cough, sneeze, or even when they speak or laugh. This includes individuals who are asymptomatic.

According to the City of Toronto, “a growing body of scientific evidence suggests that the use of masks and facial coverings is an inexpensive, acceptable, and non-invasive measure to help control the spread of COVID-19.”