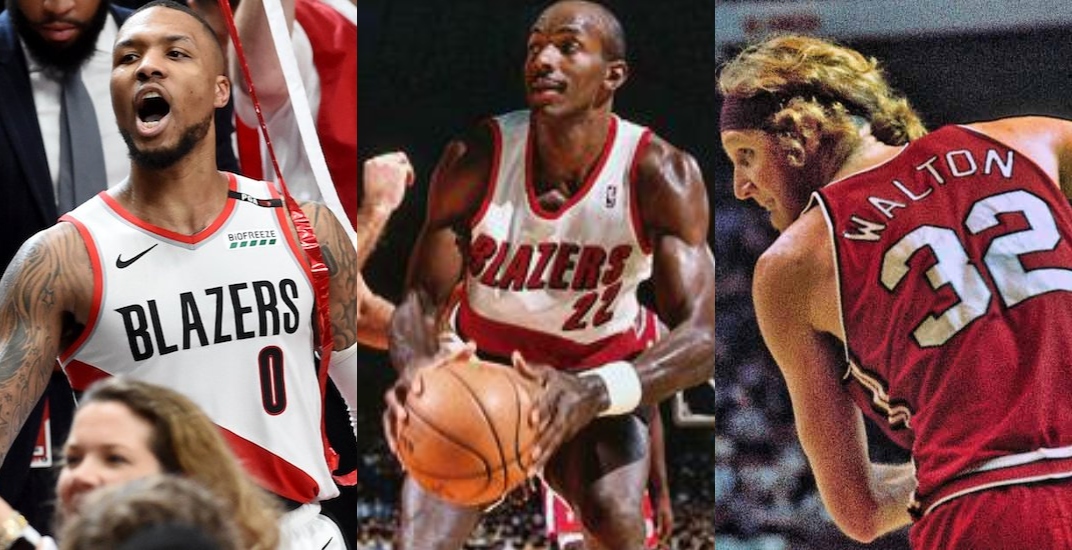 A lot has changed in fifty years. In 1970, the year the Portland Trail Blazers were founded, Richard Nixon was president, the Beatles broke up, and it cost 36 cents per gallon to fill up your car.

Over that same span of fifty years, the Trail Blazers franchise has started writing its own history. With some tremendous highs and unruly lows, the Blazers’ existence has been anything but dull.

They’ve also seen their fair share of basketball giants on the roster over the decades – their history decorated with hall-of-famers, all-time greats, and unique personalities.

From the championship-winning season to the walk-off wave goodbye and everything in between, here are the top 10 players in Portland Trail Blazers history.

Brandon Roy would almost certainly be higher on this list if his career hadn’t been cut short by injuries.

He was in the midst of taking the league by storm, producing at a rate worthy of putting him in the conversation of league’s best at the time, but chronic knee issues held him back.

An extremely intelligent player, Roy combined his athleticism with an effective mid-range and cold-blooded mentality to become the perfect all-around player.

In only five seasons with Rip City, B-Roy locked up Rookie of the year, three NBA All-Star appearances, and two All-NBA nods. Over that span he averaged 19 points and 4.7 assists per game.

Blazers fans still dream of what could have been.

Buck Williams saves the day in Game 3 of the 1996 NBA Playoffs in today's Throwback Thursday presented by @hulu. #TBT pic.twitter.com/s4F088TmY8

Buck Williams was as consistent as running water.

Although the numbers don’t jump off the page (10 points, 8.7 rebounds per game), Williams was as tough as any to play against, serving as a solid interior defender with the Blazers for seven season.

He was a staple in the starting lineup and rarely missed a game over his tenure. Despite being known as an offensive player before coming to Portland, Buck was most effective rebounding the ball. It also helped that the teams he played on with Portland had a very potent offense that centred around Clyde Drexler (foreshadowing).

"He was doing things that would just blow your mind!"

Many basketball fans felt Arvydas Sabonis made the jump to the NBA too late.

He was a basketball superstar on the international stage, deciding to come play on American soil when he was already 31-years-old.

In the days before social media, anyone who was lucky enough to see Sabonis in action had only rave reviews. Spending nearly all of of his prime overseas, by the time the Lithuanian suited up for Blazers’ he wasn’t quite the same player, but there were still flashes of sheer brilliance.

Sabonis played the game like no North American big man had before him. An incredibly smart player, it was his passes that wowed audiences. He could find teammates with precision and creativity, making offense look simple.

On January 29, 2013, LaMarcus Aldridge hit two CLUTCH shots to tie the game with 4.5 seconds left, and a fadeaway jumper at the buzzer to seal the win over Dallas.

If there was anything that helped ease the transition in the years following Roy’s retirement, it was LaMarcus Aldridge.

LMA was buried in a backup role during his rookie season, so it wasn’t until his sophomore year – and a shift to power forward – that he was able to cement himself as a stud.

Aldridge had a magnificent low post game with an excellent jumper for a big man. He put up nearly a double-double every night for multiple seasons with Portland, landing himself on a total of four all-star teams.

The thing that held LaMarcus back from being higher on this list is that he wasn’t able to carry the Blazers on his own, missing the playoffs in both 2012 & 2013 – years when he was the team’s number one option.

On February 3, 1998, Arvydas Sabonis and Rasheed Wallace combined for 47 points and 21 rebounds in a win against the New Jersey Nets, with a bizarre ending that must be seen to be believed.

Check it out in today's Throwback Thursday presented by @Hulu. pic.twitter.com/KXhVUf6yL9

You either loved or hated Rasheed Wallace, but he was an excellent ball player. Wallace could stop almost anyone down low, he would punish players in the paint offensively, and he could even step outside and shoot the three.

‘Sheed’ became more known for his record-setting pace of technical fouls than his play, but during his time in Portland he still averaged 16 points and seven rebounds per game over eight seasons.

His career wasn’t as memorable as it could have been due to the copious amount of Hall-of-Fame big men that were around at the time, but he was good enough for long enough to make this list.

Leading up to our first Decade Night, we look back at the best performances of the 70's starting with Geoff Petrie dropping 39 points in Cleveland in 1971.

Don't forget to make your own decade team: https://t.co/ZQJp6R3b1V#RipCity pic.twitter.com/pMz2GFZuDY

An original Trail Blazer, Geoff Petrie lands high on this list because you never forget your roots.

As one of Portland’s first-ever guards, Petrie grabbed the spotlight in the club’s first year of existence. He averaged over 24 points per game, made the All-Star team, and won Rookie of the Year. He was traded after five more successful seasons, but decided to retire instead of play outside of Portland.

Terry Porter will always be a household name in the Rose City.

Playing 10 seasons with the Blazers, TP has the longevity and consistency to be a top-five player on this list.

In one of his best seasons with the club, Porter averaged 17.1 points and 9.5 assists per game, while helping lead the team to the NBA Finals. Although he never got the team over the hump, he was a big part of some of the greatest seasons in franchise history.

Bill Walton’s another case of chronic injuries ending a career too early and cutting several seasons short over his tenure with the Blazers.

Bill was the first overall pick in 1974 and it just three years after that he willed Portland to its only championship in team history. During that season he averaged 18.6 points per game and a league-leading 14.4 rebounds and 3.2 blocks per game, while winning the Finals MVP.

Walton’s accomplishments have resulted in his jersey being retired by the franchise, had him labelled as a top 50 player of all-time in 1996, and have landed him in the Naismith Memorial Basketball Hall of Fame.

He hasn’t quite managed to become the ‘Greatest Blazer of all-time,’ but he is definitely in the conversation.

The All-NBA point guard has had an incredible run in Portland and that doesn’t appear to be coming to an end any time soon, recently signing an extension to stay through 2024-25.

After carrying the Trail Blazers to the Western Conference Finals in 2019, while providing one of the greatest shots in team history, Dame has eternally etched himself into fans’ hearts.

On June 7th, 1990, Clyde Drexler threw down this LEGENDARY dunk on Isiah Thomas. 😱

Take a look back in today's Throwback Thursday presented by @Hulu. #TBT pic.twitter.com/z0uvL85SjJ

Without question, the undisputed king on this list is Clyde ‘The Glide’ Drexler.

It is just unfortunate that Drexler’s career had to align with someone named Michael Jordan, otherwise he might have another title and more recognition as a legend.