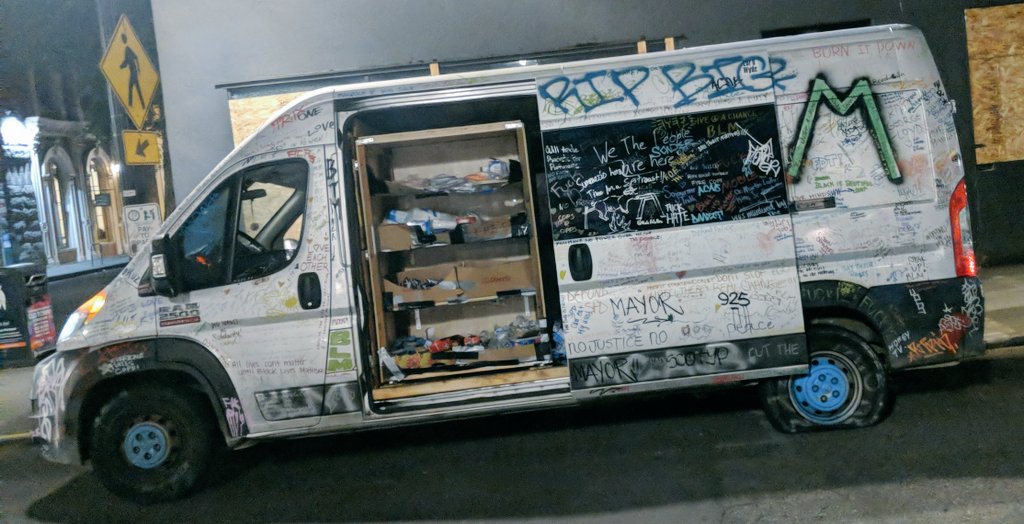 The “snack van” has been a mainstay during protests in downtown Portland over the past month, offering food and water to demonstrators. However, this weekend the Portland Police Bureau made a move to disable the support vehicle.

This Portlandian, who asked Daily Hive to refer to him as ‘Jeva’, has been a critical supporter of the protests and marches for weeks. Kitting out his sprinter van with snacks, hydration, and most-importantly basic medical supplies, Jeva brings much-needed assistance to the hundreds demonstrating daily.

“The crowd came up on me and I didn’t have any other place I could go and the police just came in and slashed three of my tires,” Jeva told Daily Hive.

A livestream clip, shows Jeva struggling to get through the crowd in order to put distance between his van, and the police who were right behind the van.

Hey @PortlandPolice was it really safer for everyone to be followed with teargas for an hour instead of the guy with medical supplies, water and food for everyone? When was I a danger so that you had to slash three tires to stop me? #BLM #portlandprotest #PoliceBrutalityPandemic pic.twitter.com/Vfi3BZYrhy

Video shows the van lagging slightly behind the moving protest crowd — who were at the time, being moved by riot police — when police officers ran up to the Sprinter, and slashed the van’s tires.

Other social media videos show that the police previously attempted to arrest “snack guy” for an unknown violation.

“Interfering with a police officer, when I asked what the Interference was somebody said because it was reserved parking spot,” said Jeva. “I was never given a court date or know of any follow-up, I wasn’t even given the information to where my van with all my belongings had been taken to.”

Community members and fellow Black Live Matter protesters rallied behind Jeva and the snack van, helping the driver out by assisting in acquiring and changing the van’s tires.

As far as why the police slashed his tires, Jeva says “they haven’t said anything, my own livestream shows the crowd coming to me at a red light followed by them smashing my tires after the crowd started pouring through.”

Daily Hive has reached out to the Portland Police Bureau but has yet to receive a response.