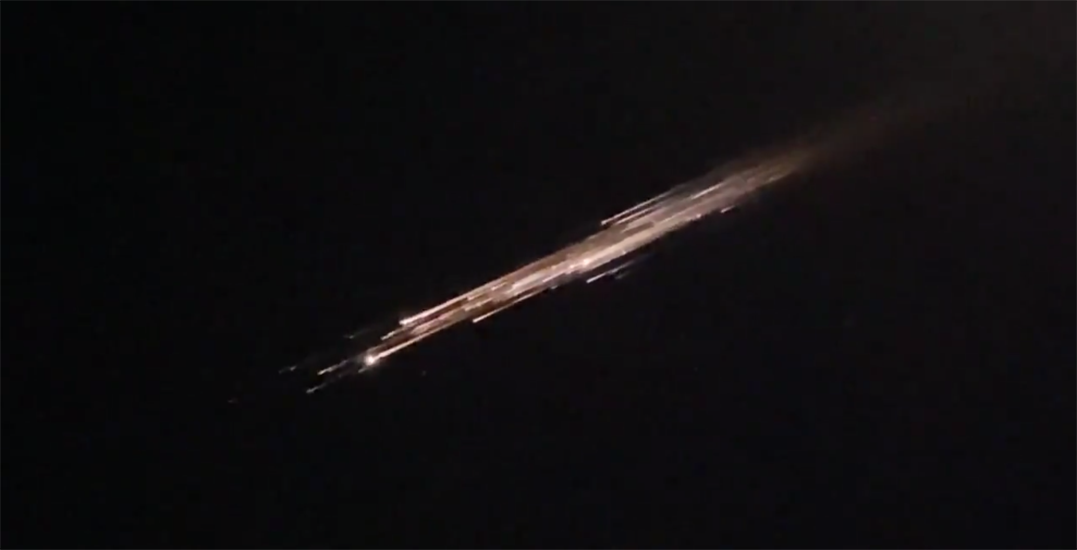 Residents living in the Pacific Northwest were astonished on Thursday night after a streak of bright lights that lit up the night sky.

The spectacle occurred just after 9 pm, with countless social media users sharing the photos and videos of the incident online. The streaking lights were captured in parts of Washington and Oregon, as well as British Columbia in Canada.

Anybody get any footage of that light in the sky over Salem?#meteor #Meteora pic.twitter.com/7QYzN0ZW4U

Jonathan McDowell, an astrophysicist at the Harvard-Smithsonian Center for Astrophysics, explained that the spectacle was caused by a SpaceX Falcon 9 rocket that launched just over three weeks ago.

The Falcon 9 second stage from the Mar 4 Starlink launch failed to make a deorbit burn and is now reentering after 22 days in orbit. Its reentry was observed from the Seattle area at about 0400 UTC Mar 26. pic.twitter.com/FQrBrUoBHh

“The Falcon 9 second stage from the March 4 Starlink launch failed to make a deorbit burn and is now reentering after 22 days in orbit,” McDowell says on Twitter.

The Falcon 9 is a reusable rocket that was designed and manufactured by SpaceX. Recently, it’s been used to launch satellites, an integral part of SpaceX’s Starlink satellite internet service.

McDowell added that space debris is a fairly common occurrence — Thursday’s spectacle marks the 14th piece of space junk with a mass over one tonne that’s reentered the atmosphere since the start of 2021.

Another fun debris fact: this is the 14th piece of space junk with a mass over one tonne that has reentered since Jan 1st this year.

Full video of the Falcon 9 second stage from the Mar 4 Starlink launch. Timelapse, so its sped up #Seattle #space #spacedebris #meteor pic.twitter.com/eNNr1Ikt3u