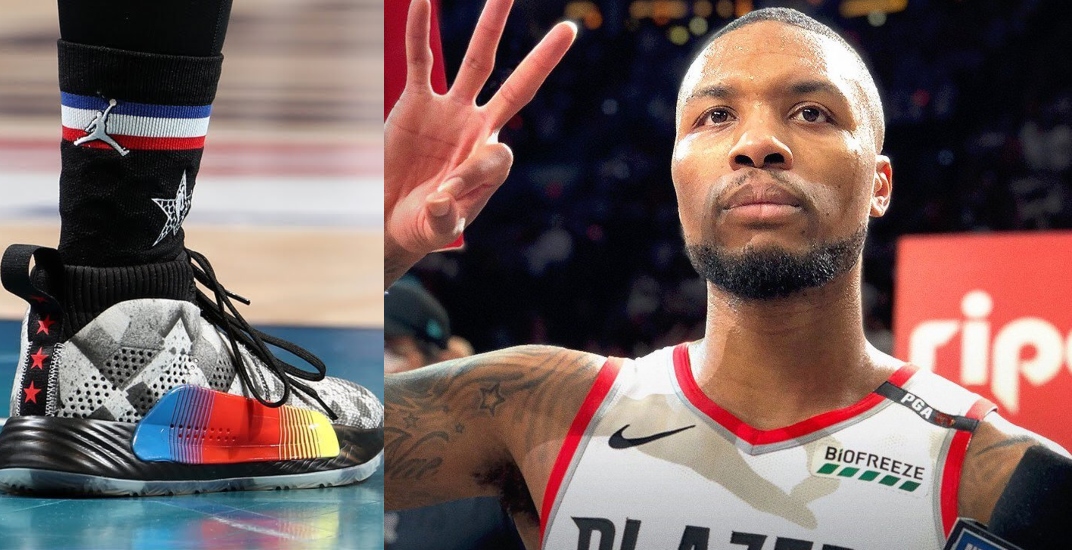 There are a lot of ‘sneakerheads’ in the NBA and Portland Trail Blazers star Damian Lillard is certainly one of them.

In 2018, the NBA lifted the restrictions on footwear, allowing NBA players to have free rein of expression when it comes to their shoes. Since the rules have changed, fans have seen unique colorways, scribed messages and even cartoon characters grace the kicks of their favorite players.

Lillard has taken full advantage of the restriction-less Association, donning custom footwear designs on multiple occasions. He has used well-known designers such as Kickstradomis to help mark special events, to highlight an important moment, or to just simply stand out.

In honor of his newest shoe, the Dame 6 “Ruthless,” set to release on November 29, take a look back at the 10 best shoes that Dame has worn on the court.

This shoe combines not one, but two of the things Lillard loves. It’s no secret Dame loves to rap and these kicks take his lyrics and transcribe them onto a custom version of his first signature shoe.

The true definition of custom. Former Trail Blazers centre Robin Lopez took the time to hand draw this design onto a pair that Damian Lillard would wear for Game 4 of their first round playoff matchup against the Memphis Grizzlies in 2015. He went on to drop 32 points.

These just look like a handful of Cadbury Mini Eggs from a far. How could you not like that?

🙏🏽 RIP Paul Allen🙏🏽@Dame_Lillard will be paying homage to the great Paul Allen with these kicks. Love being part of something special like this. Good luck fam! pic.twitter.com/z12ZzYEcNF

These kicks pay tribute to former Blazers owner Paul Allen. Lillard and Allen shared a mutual love of music and that played into the design work.

Lillard paid tribute to one of the head of security for the Trail Blazers with these shoes, Air Force veteran Rick Riley. The great look as well as the overall gesture puts this pair into the top six.

This pair is defined by its simplicity. Not over-the-top to a point where they are in your face, but flashy enough that they’ll turn heads. Bonus points for the Trail Blazers colorway.

Any basketball fan can really appreciate these shoes. Lillard donned a custom pair of sneakers that paid tribute to the popular cartoon spinoff series ‘Game of Zones’ from Bleacher Report.

Riding the wave of Marvel’s 2018 hit ‘Black Panther,’ Lillard went out and got the  recognizable purple and black colors plastered onto his footwear. With the superhuman abilities that both Black Panther and Dame possess, the design only made sense.

Best part: ‘Wakanda Forever’ written down the back.

You don’t see camouflage patterns on a shoe very often, so when Dame cracked these out at the 2018 All-Star game, they got noticed. The collaboration with BAPE brought the popular streetwear company to hardwood kicks for the first time and their efforts didn’t disappoint.

@Dame_Lillard The entire NASCAR community saw and appreciated your sweet kicks at the ASG! Now we would love to see you take in a race first hand!

Let’s figure out a race you can attend this summer.

The experience is truly unlike anything in the world. I promise you’ll love it! pic.twitter.com/TIxd8H9Uwg

The All-Star game is usually when the stars bring out the big guns and in 2019, Lillard wore a NASCAR-inspired version of his Dame 5’s. The strip of color paid homage to the NASCAR logo, while the base of the shoe featured a black and white checkered flag pattern.